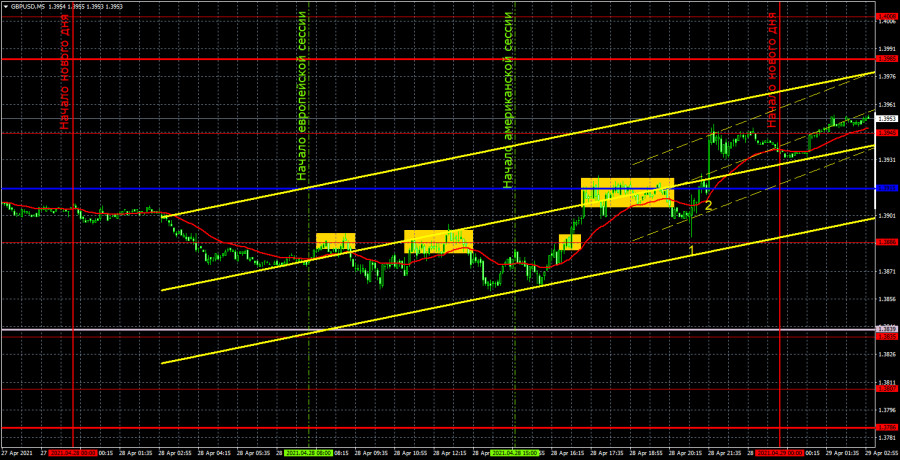 The GBP / USD currency pair on Wednesday, April 28, continued to trade in the same mode as on Monday and Tuesday. We have warned in all recent articles that the pair is likely to continue unworked movements, so it may be better not to trade it for several days. Basically, this advice remained very useful, as Wednesday’s movements still left a lot to be desired. Until the very evening, when the results of the Fed meeting began, their announcement and a press conference with Jerome Powell, that is, when traders had to leave the market and close all deals, the pair continued to move in the swing mode. To better understand what we mean by the concept of “swing”, let’s look at all the movements of the pair within the day: 44 points down – 35 up – 34 down – 60 up. That is, the pair just jumped up and down all day and it was very difficult to make money on this. If the movements themselves were at least 60-70 points, then it would still be possible to look for signals. But in the current situation, the best solution would be not to enter the market at all. Nevertheless, several signals were generated on the 5-minute timeframe, so they should be considered and conclusions should be drawn from them. The first two – identical – rebound from the extremum level of 1.3886 in the European trading session. After the formation of the first, the price went down 16 points, after the second – 20, which at best would be enough to set Stop Loss to zero. Naturally, the steam did not reach any immediate goal. Thus, the best solution would be to manually close these positions. When in the second half of the day a buy signal was formed to overcome the level of 1.3886, it should not have been worked out at all, since by that moment two signals had already formed from this level, which did not lead to profit, and the pair continued to trade, as if reluctantly. It is noteworthy that the pound sterling began to rise in the American session at the same time as the European currency. Although in the case of the euro, we concluded that Christine Lagarde’s speech had an impact on this movement. It is quite possible that in reality the markets began to sell the dollar ahead of the results of the Fed meeting, and therefore the pound sterling also began to grow. We are not considering the events after summing up the results of the FRS meeting. In any case, you shouldn’t have traded during them. 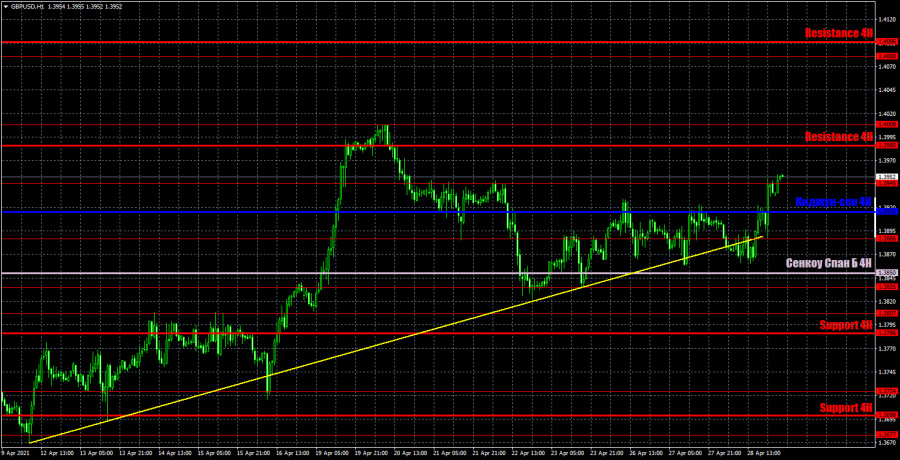 On the hourly timeframe, the technical picture still requires no explanation. The upward trend was canceled, as the pair began to move openly sideways and the trend line was overcome. The pound sterling continues to move in a “swing” mode on almost all timeframes, starting from the 4-hour hour and down. Perhaps the situation will change after summing up the results of the Fed meeting. But so far, the conclusions can be made disappointing: it is very inconvenient to trade the pair, the movements are weak and constantly alternating. Now the “technique” also generates false signals, and in general the situation is very unfavorable and threatens with losses. We will continue to pay attention on Thursday to the most important levels and lines: 1.3945, 1.3886, 1.3835 and Kijun-sen (1.3915), Senkou Span B (1.3850). However, even near them there is no guarantee that a strong signal will be generated. It is recommended to set the Stop Loss level at breakeven when the price passes in the right direction by 20 points. The nearest level / line is always used as targets (exceptions – if the target is too close to the signal). On Thursday, April 29, no major events are scheduled in the UK again, and in the US, the GDP for the first quarter and a minor report on claims for unemployment benefits will be published. Not the worst decision would be not to enter the market for the pound / dollar pair for several days. 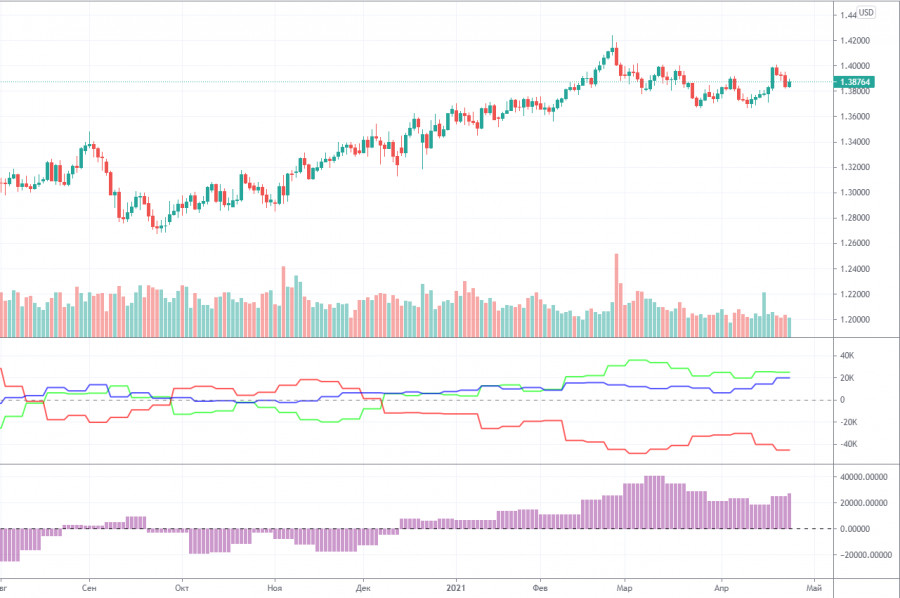 Recall that during the last reporting week (April 13-19), the GBP / USD pair rose by 200 points. As for the COT report, the latest report showed no significant changes in the balance between buy and sell contracts for the group of non-commercial traders. During the reporting week, non-commercial traders opened 10.5 thousand Buy-positions and 8.2 thousand Sell-positions. Thus, their net position increased slightly, by 2.3 thousand contracts, and the mood became a little more “bullish”. However, these are not changes from which new conclusions can be drawn. In general, the uptrend for the pound remains, and this is the most important thing. As in the case of the European currency, the COT reports now do not signal at all that the upward trend is maintained, and the key influence on the pair rate is exerted by the factor of the injection of trillions of dollars into the American economy, and not by the behavior of large players. If you look at the first indicator, you can see how the red and green lines often crossed, which indicates that there is no clear idea in which direction to trade the pound at all! Now the green and red lines have moved away from each other, which formally means an uptrend. Therefore, based only on the COT reports, we can also assume further upward movement. However, we have already said that it will be very difficult for the pound to grow from a purely technical point of view, since this growth is already completely unreasonable. Although another couple of trillion dollars in the US economy – and even the pound sterling will be able to continue strengthening, despite the problems with the Northern Ireland Protocol, despite the Scottish question, despite the weak recovery and a possible drop in GDP in the first quarter, despite the general decline economy due to Brexit and not very bright prospects.