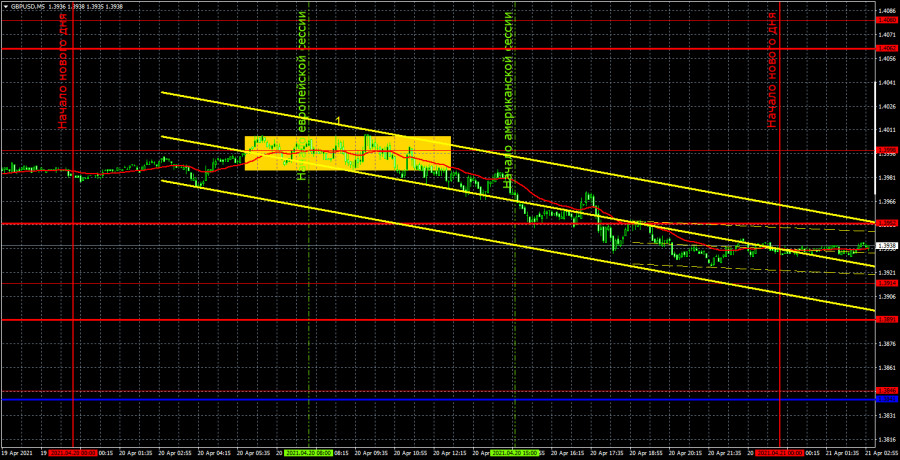 The GBP / USD currency pair on Tuesday, April 20, also began a round of downward correction. Traffic was generally rather weak. During the day, the pair passed from a maximum to a minimum of no more than 70-80 points. For a pound, this is not very much, although in principle it is not small. The most important thing is that a relatively working signal was formed for the pound during the day, which could be worked out. However, before analyzing it, you should pay attention to the side channel, which was formed during the Asian and European sessions. The price was inside it for quite a long time, and in the middle of this channel, the extreme level 1.3998 was just passing. Therefore, all the time, while the pair was in the flat, traders had to guess whether there will be a rebound from this level or its overcoming. Fortunately, the flat started at night and was visible in the morning. Therefore, at the very beginning of the European session, it could be identified. Positions should have been opened for selling when the price consolidated below the rectangle signaling a flat. The nearest target was the support level 1.3952. It was later worked out by traders, so it brought a profit of about 28 points. Slightly, but still better than nothing, and better than the EUR / USD results. Since the level of 1.3952 is not an extreme, no buy or sell signals were formed around it. Therefore, the morning signal remained the only one during the day. It should also be noted that at the very beginning of the European session in the UK, several macroeconomic reports were published, which, however, had no effect on the course of trading. Although they could have done it. The fact is that the unemployment rate in the UK fell from 5% to 4.9%, and the number of new applications for unemployment benefits turned out to be well below forecasts. Wages rose in line with the forecast. But, as we said, there was no reaction. 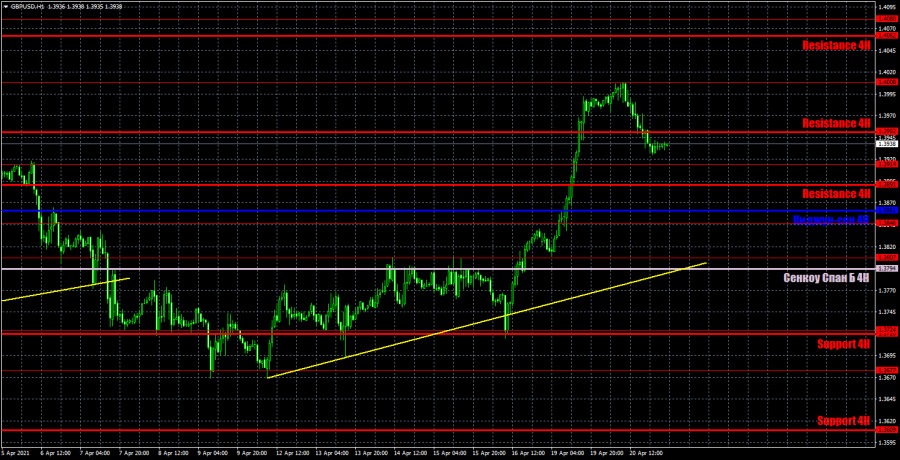 On the hourly timeframe, the technical picture still requires no explanation. The upward movement ended near the 40th level, we moved the nearest extreme level to the high of yesterday. After that, a downward correction began in both the euro and the pound. Synchronously. Thus, everything is going according to plan, and the pound sterling, after a slight correction, may resume its upward movement. Unfortunately, it is the pound sterling that raises the most questions, since if you look at the 4-hour timeframe, you can see that this pair can now move in the “swing” mode. That is, after going up about 300 points, it may well collapse down by the same 300 points. We do not expect such a scenario for the Euro currency yet, but for the pound it is quite real. Therefore, trading from levels and lines remains a very important aspect. When bouncing from them and overcoming signals, signals will be generated. The most important levels for today are 1.4080, 1.4008 and 1.3914. Senkou Span B (1.3794) and Kijun-sen (1.3861) lines are also important, and signals can also form around them. As before, it is recommended to set the Stop Loss level at breakeven when the price passes 20 points in the right direction. The nearest level / line is always used as targets (exceptions – if the target is too close to the signal). Inflation for March is scheduled to be published in the UK on Wednesday, April 21st, but considering how the markets performed statistics from Britain on Tuesday, it is likely that there will be no reaction to the inflation report, unless the actual value is very different. from the forecast. 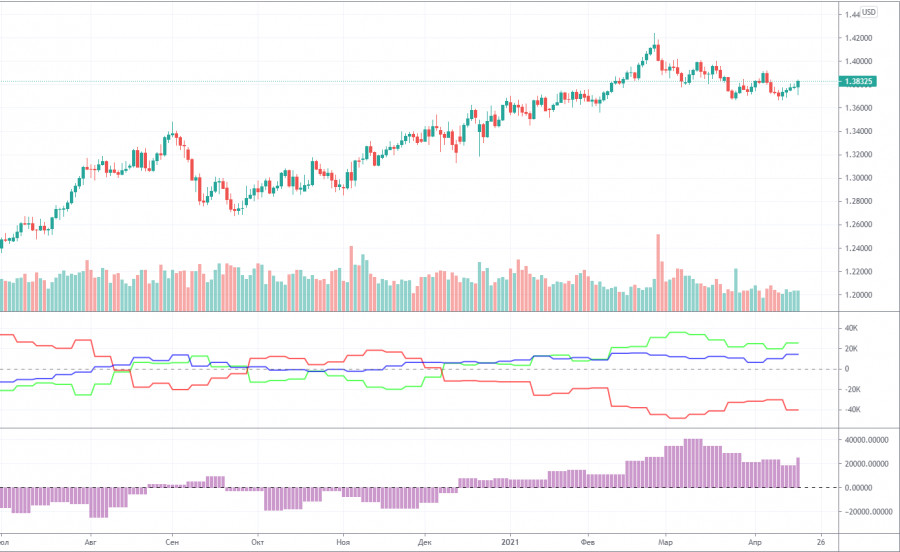 Recall that during the last reporting week (April 6-12), the GBP / USD pair fell by 160 points. The illustration above clearly shows how “strong” the current downward correction is! Recall that over the past 6-8 weeks, professional traders have been actively cutting both buy and sell orders. If on February 23 the first were opened 69 thousand, and the second – 34 thousand, then as of April 6, 44 thousand Buy-contracts were opened, and Sell – 25.7 thousand. Thus, overall, the ratio between purchases and sales has not changed. Only the number of contracts opened by the “Non-commercial” group has changed. Hence the conclusion: “bullish” mood remains among professional traders, but in general, fewer and fewer speculators want to deal with the “unbalanced” pound sterling. Basically, the behavior of non-commercial traders is well illustrated by the indicators below the main chart. The first, which displays the change in net positions of the three categories of traders, shows a constant change in direction, constant line crossings. And this is all despite the fact that there has been a steady upward trend in the last 12-13 months, which is beyond doubt. It turns out that there is a trend and it is strong, but the most important category of traders does not buy the pound sterling with huge deals. Moreover, the second indicator shows that non-commercial traders have been increasing their purchases and then increasing sales in the past six months. That is, there was no clear “bullish” mood. This only proves once again the fact that the pound and the euro have grown in the last year on the factor of the increase in the money supply in the United States. That is, large players traded in accordance with their interests and goals, but their deals were blocked by the injection of trillions of dollars into the US economy. Well, in the reporting week, non-commercial traders began to reopen purchase contracts, in the amount of 7.2 thousand. Fewer than a thousand sales contracts were opened. It seems that the big players are again beginning to believe in the growth of the “bitcoin” pound sterling.