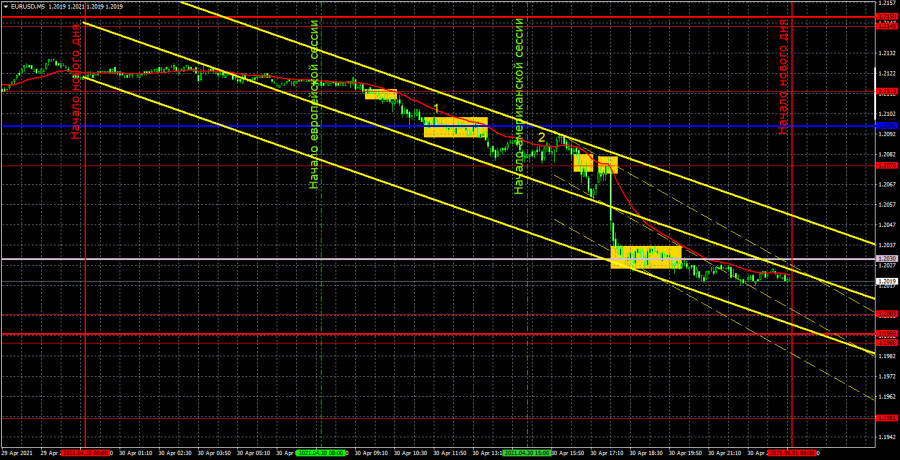 The EUR / USD pair was trading very actively on April 30. Unfortunately, for most of the current week, the quotes of the pair were traded as if reluctantly, therefore, it was not possible to earn a lot during the first four trading days of the week. There were a lot of false signals, and the volatility of the pair often did not exceed 40 pips, so it was, in principle, very difficult to trade. But all of the above does not apply to Friday. From the very morning, without even waiting for the publication of macroeconomic statistics, quotations began to decline and began to form signals. The first was formed at the beginning of the European session – overcoming the level of 1.2113. A pair should have been sold here. There was no rebound from the Kijun-sen line, so it was necessary to stay in short positions. Around this time, when the price was near the critical line, a whole package of important statistics was published in the European Union. It turned out that the inflation rate rose to 1.6% y / y, the volume of GDP in the first quarter fell by 0.6% q / q, and the unemployment rate fell from 8.2% to 8.1%. This package of statistics could be interpreted in different ways. For example, a seemingly strong unemployment report usually never triggers any market reaction. While GDP contracted in the first quarter, initial forecasts were worse than -0.6% q / q. The consumer price index rose (bad for the euro, but good for the monetary policy of the ECB), but at the same time core inflation (excluding changes in fuel and energy prices) fell. And in recent years, central banks have been looking at core inflation rather than overall inflation. In general, this package of statistics could be interpreted in any way. Notably, the markets did not seem to react at all. The number “1” in the illustration marks the location of the statistics release in the Eurozone. As you can see, there are no reversals or strengthening of the movement in this place. Let’s go back to our signals. After breaking the Kijun-sen line, the quotes dropped to the extremum level of 1.2076, which was also immediately overcome, so short positions should still be kept open. This was followed by an unambiguous price rebound from the level of 1.2076 and a fall to the Senkou Span B line (1.2030), from which there was also no hint of a rebound. Since the time was already approaching the close of the market, here it was possible to manually close the only trade of the day to sell or take profit near Senkou Span B. In both cases, the profit was about 75 points. Excellent result.

Also read  How to trade the GBP / USD currency pair on April 27? 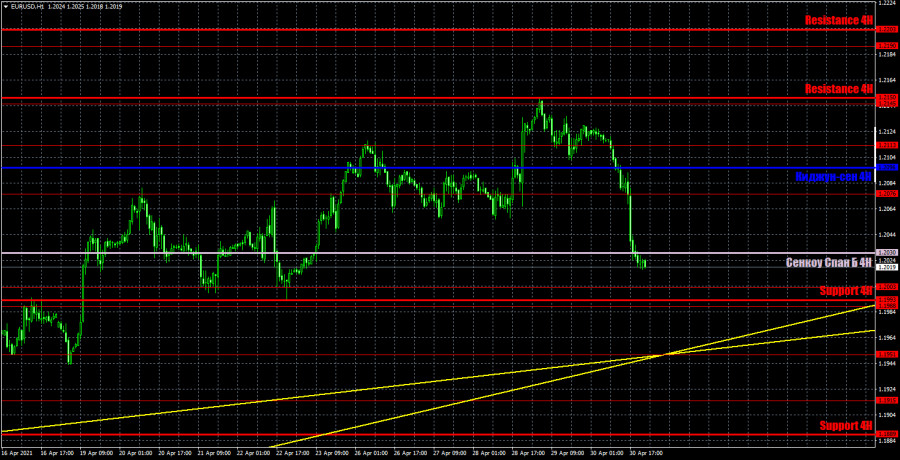 On the hourly timeframe, you can also clearly see that the price has been declining over the past day. At the end of the week, the price fixed below the Senkou Span B line, so the chances for a further decline increase. However, on a more global scale, we still expect an uptrend, therefore, we believe that at the moment the pair is correcting after a month’s growth. Accordingly, another 100 points may go down and hardly immediately on Monday. Both uptrend lines maintain an uptrend. In general, we still recommend trading from important levels and lines that are indicated on the hourly timeframe. The nearest important levels are 1.1988, 1.2003 and 1.2076, as well as the Senkou Span B line (1.2030). Signals can be “bounces” and “overcoming” of these levels and lines. Do not forget about placing a Stop Loss order at breakeven if the price moves 15-20 points in the right direction. This will protect against possible losses if the signal turns out to be false. On Monday, the European Union and the United States are scheduled to publish indexes of business activity in manufacturing. However, we again draw the attention of traders to the fact that the markets are very reluctant to react to macroeconomic statistics. 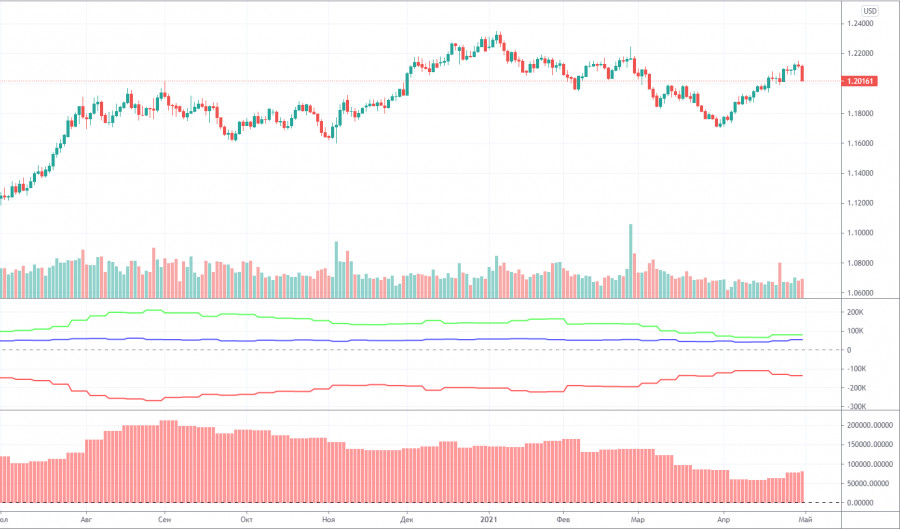 Recall that during the last reporting week (April 20 – 26) the EUR / USD pair increased by 50 points. We would like to remind that since February major players have been intensively reducing buy contracts and opening sell contracts. However, in the last couple of weeks, there has been an increase in bullish sentiment among the group of non-commercial traders. Let us remind you that this is the most important group of traders, which usually determines the trading vector. During the reporting week, professional players opened 5.5 thousand Buy contracts and 2.9 thousand Sell contracts. Thus, the net position increased by 2.6 thousand contracts. This is not much for the euro. In general, the number of buy contracts remains much higher than that of sell contracts: 202 thousand versus 121 thousand. Therefore, in general, we can conclude that the upward mood among traders remains and even increases slightly. We also remind you about the factor of the injection of trillions of dollars into the American economy, which cannot but affect the dollar exchange rate in the international currency market. Recall that even if the major players sell billions of euro, but the Fed prints trillions of dollars, the euro will still go up in price. COT reports reflect the actions of major players in the European currency, but do not reflect the actions of the Fed against the dollar. Given the fact that the US government will continue to develop more and more stimulus packages for the economy, we believe that the economy continues to remain in a “post-crisis state”, when it is impossible to do without cash injections and incentives. This means that these infusions are in the first place in terms of the degree of influence, and not the actions of large players.