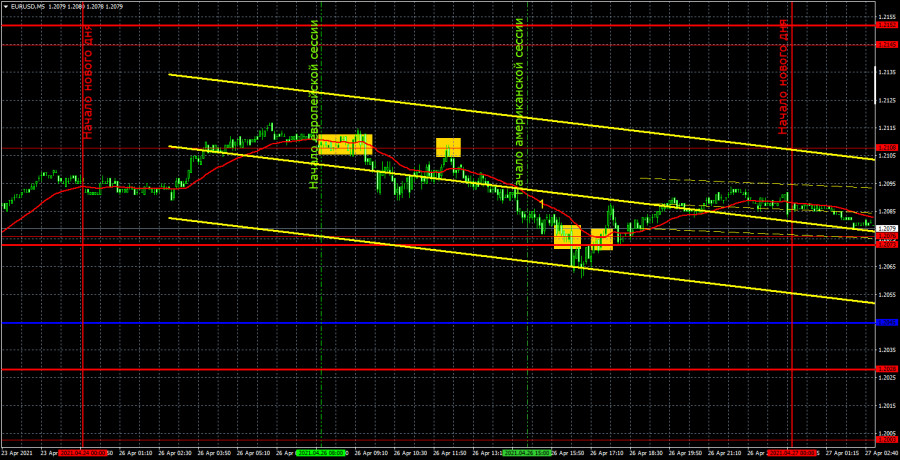 The EUR / USD pair was trading quite actively on April 26. For the first trading day of the week with just one macro report, 60 pips is not bad. The movement during the day was calm, without sharp and frequent reversals, which are usually impossible to work out normally. Thus, in principle, traders should have been able to make money, according to our yesterday’s recommendations. During the Asian trading session, the quotes of the euro / dollar pair did not stand in one place, but were growing. True, this growth did not last long. The European trading session began for the pair just above the extremum level of 1.2108, so fixing below it was the first signal to sell. After the formation of this signal, the price did not go down 15 points and returned to the level of 1.2108. Thus, Stop Loss should not have been set at breakeven. There was another rebound from the 1.2108 level, so it was still necessary to stay short. The second attempt by the bears was crowned with success, and the price dropped to the nearest level, also the extreme at 1.2076, allowing to earn about 26 pips. There was no rebound from this level, but there was a breakdown, according to which it was possible to open new short positions, however, about an hour before that, a rather important report on orders for durable goods in the USA was published (figure “1”) and in theory it was better would close all open positions shortly before its publication and not open new ones in the near future after it. A sell deal in any case would have closed at a profit of about 26 points, but it would have been possible to save yourself from losses on a signal to overcome the level of 1.2076. A little later, the quotes were already fixed above the level of 1.2076, and since 2 hours have passed since the publication of the only report, purchases could be opened by this signal. At the time of this writing, this deal has not yet closed. 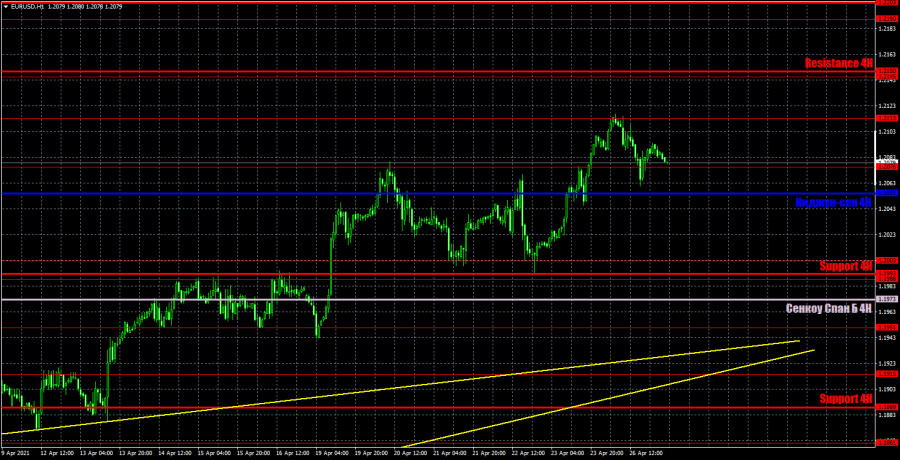 On the hourly timeframe, the picture is clearly corrective. After a rebound from the level of 1.2113, the quotes of the pair began a downward correction within the uptrend, which continues to be supported by two uptrend lines at once. Thus, so far we are talking, rather, about a rollback. Already from the critical line of Kijun-sen, the price can bounce and resume the upward trend. At the expense of the reasons, we have repeatedly said in our fundamental articles, we recommend that you familiarize yourself with them. We still recommend trading from important levels and lines that are indicated on the hourly timeframe. The nearest important levels are 1.2076, 1.2113 and 1.2145, as well as the Kijun-sen line (1.2055). Signals can be “bounces” and “breaking” of these levels and lines. Do not forget about placing a Stop Loss order at breakeven if the price moves 15-20 points in the right direction. This will protect against possible losses if the signal turns out to be false. There are no important events scheduled for Tuesday in the European Union that deserve the attention of traders, but in the US a more or less interesting indicator of consumer confidence for April will be released. However, even judging by yesterday’s report on orders for durable goods, we are talking about the reaction of the market in the best case, points 20-30. 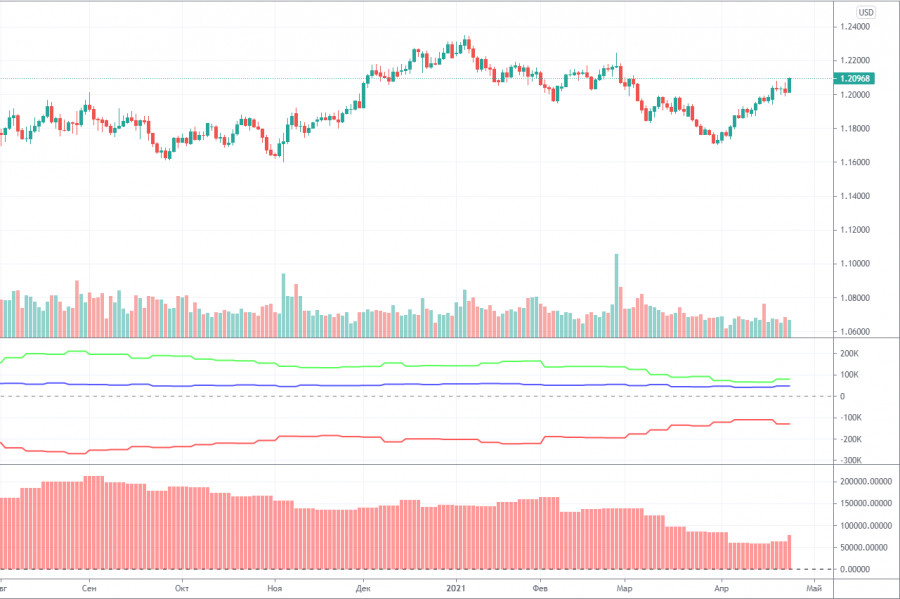 Recall that during the last reporting week (April 13-19), the EUR / USD pair rose by 120 points. We would like to remind that since February major players have been intensively cutting buy contracts and opened sell contracts. In the “Non-commercial” group since the beginning of February, the total number of Buy-positions has decreased from 240 thousand to 190, and the number of Sell-positions has grown from 76 thousand to 127. Thus, the weakening of the “bullish” mood is evident, however, it is still remains bullish, but in the last two weeks it has begun to strengthen again. Recall that the COT reports signal the end of the uptrend since last September, when the lines of the first indicator moved as far apart as possible. However, we still remind traders that the factor of pumping money into the American economy has not been canceled. Simply put, large players can trade as they please, in any direction, buy any currency, but if the money supply of dollars increases by trillions, the influence of the players themselves on the foreign exchange market becomes less. Accordingly, now in the first place is simply the factor of the increase in the money supply in the United States, and not the behavior of non-commercial and commercial traders in the foreign exchange market. During the last reporting week, professional traders opened 6.2 thousand buy contracts and closed 8.5 sell contracts. Thus, their net position increased by 14.7 thousand contracts. Thus, it is possible that the major players realized that the European currency would still rise in price, and the dollar would fall, and decided to trade with the trend themselves. If earlier it was the big players who formed the trend, now they themselves follow the trend. In general, from our point of view, the likelihood of further growth of the European currency in 2021 is very high.