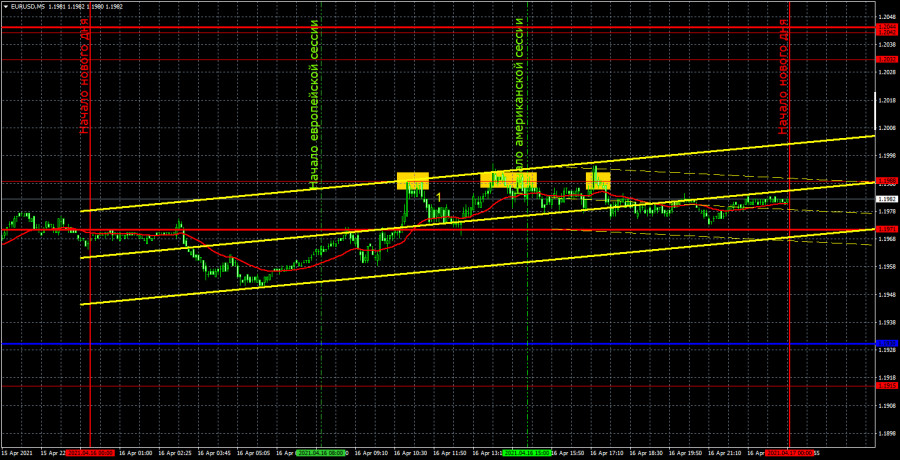 The EUR / USD pair on April 16 continued to trade very calmly, with minimal volatility. This is clearly signaled by two linear regression channels, which, firstly, are very narrow, and secondly, are directed almost sideways. As on Thursday, the pair failed to overcome the extremum level of 1.1988 on Friday. As on Thursday, three attempts were made to overcome, all three were unsuccessful. As for the signals, it was hard enough to find them on Friday, but still the level of 1.1988 was worked out three times. Since this level is an extreme, it was near it that sell signals were formed three times. Each of the three times the pair could not go down more than 13 points, so there was not enough reason even to set Stop Loss to breakeven. Therefore, this deal (one, since there were no grounds for manual closing either: consolidation above the level of 1.1988 did not take place) could be closed manually at any time. It is clear that according to the second and third signals, short positions should not have been opened, since the first deal was not even canceled – the volatility was so low. In general, on this single trade, traders could earn + -10 pips maximum. During the day, a single report on inflation in the European Union was published, which did not cause any reaction in the market. It is marked in the illustration with the number “1”, as you can see, after its release, nothing has changed. Inflation in the European Union accelerated slightly in March, but, as we said, there was little sense in this. 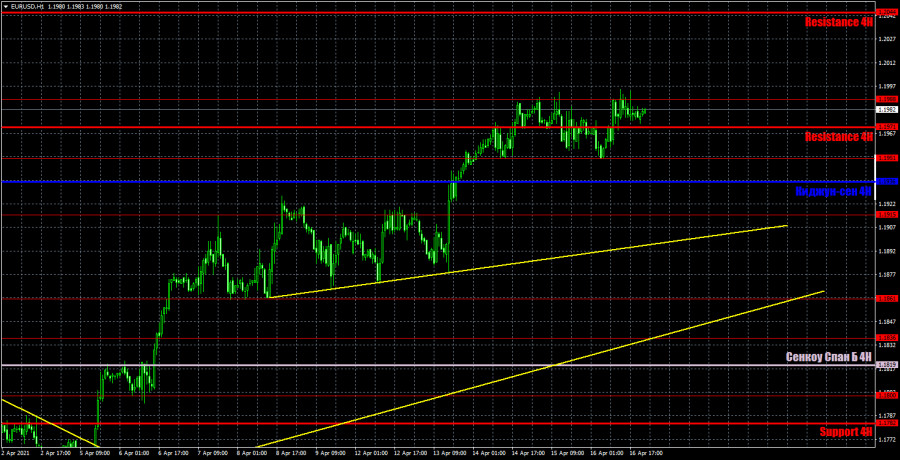 On the hourly timeframe, everything looks even more boring. The pair spent three days near the 1.1988 level and could not overcome it. True, it also did not start a downward correction, basically there were only small rollbacks, a maximum of 40 points down. As a result, at the moment the quotes were squeezed between the levels of 1.1951 and 1.1988 in a sideways channel. At the same time, the upward trend is preserved, which is supported by two ascending trend lines at once. Thus, the likelihood of a further march to the North remains high. Basically, in our fundamental articles, we regularly say that we expect the pair to continue to grow in 2021. Thus, in general, so far everything is going according to plan. No important fundamental and macroeconomic events are scheduled for Monday in the European Union and the United States. Thus, volatility may remain low. We still recommend trading from important levels and lines that are indicated on the hourly timeframe. The nearest important levels are 1.1915, 1.1951 and 1.1988, as well as the Kijun-sen line (1.1936) and the trend line. Signals can be “bounces” and “overcoming” of these levels and lines. Do not forget about placing a Stop Loss order at breakeven if the price moves 15-20 points in the right direction. This will protect against possible losses if the signal turns out to be false.

Also read  The dollar has new trump cards in mind 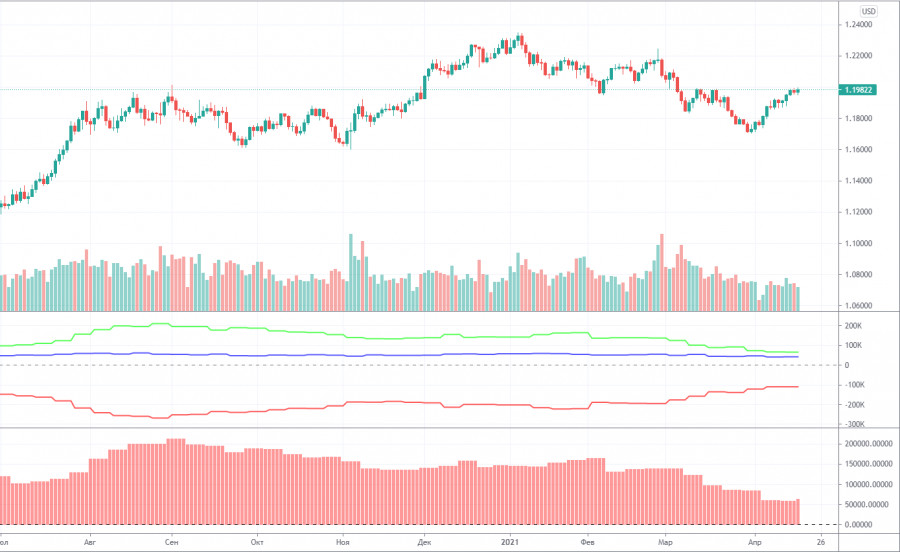 Recall that during the last reporting week (April 6-12) the EUR / USD pair rose by 100 points. Recall that over the past 6 weeks, professional traders have been actively reducing Buy contracts and increasing Sell contracts, but the total number of buy contracts from a group of “Non-commercial” traders still remains twice as large as the number of sell contracts. This suggests that sentiment among non-commercial traders remains bullish, but has weakened in recent weeks. The new COT report showed minimal changes. During the reporting week, major players opened 2.2 thousand Buy-contracts and closed 2.2 thousand Sell-contracts. Thus, the net position increased slightly, by 4.4 thousand, that is, the mood of the major players became more “bullish”. We said earlier that the COT report data suggested the end of the uptrend back in September last year. However, from that moment on, the uptrend continued without problems, and now it may resume. This is all due to the same factor of pumping the American economy with money. Let’s ask ourselves: what exactly do COT reports display? They reflect the actions of the whales of the foreign exchange market, those players who make the majority of transactions in the foreign exchange market, that is, move it. However, COT reports do not take into account such a factor as the inflation of the money supply. It turns out to be a paradox: large players can sell off the European currency, but it will still rise in price in the end, since the amount of dollars in the economy and markets is growing. A banal logical chain: the supply grows – the price falls. Therefore, in the last, pandemic year, COT reports do not always accurately reflect what is happening on the market. However, they make it clear how the mood of professional players is changing.

Also read  Biden in Congress, Fed meeting and US GDP