Europe and the UK are experiencing difficult economic times, and no matter how loudly politicians shout about the vaccination program and the early mitigation of quarantine measures introduced in connection with the coronavirus pandemic, one should not expect a quick economic recovery.

Investors are well aware of this.

And now we are witnessing a fantastic sub-reality, where the European and British currencies are striving to restore the medium-term uptrend, and for a moment it may seem that the market cycles of correction -> momentum coincide, but this is not so.

In previous analytical reviews, as far back as February, I have repeatedly pointed out that the euro and pound did not just play on a speculative upward move, they came to the brink of 2018, where a change in the long-term trend stands behind the aisles, where in the current realities it is simply illogical.

Now, after large-scale corrections, the market has once again embarked on an upward cycle. It may seem that the transition of the correction to the momentum is justified, but if we take into account the fact of historical highs, then their break at this time should signal the prospects for economic recovery in Europe and Britain, which from the point of view of fundamental analysis will be considered an unconfirmed signal.

Based on the discrepancies in technical and fundamental analysis, the only thing that remains is speculative manipulation, which runs counter to common sense.

That is why many investors are in no hurry to reach mid-term positions and put them off until better times.

What should ordinary traders do who, as strategic players, do not have the opportunity to sit out for so long outside of trading positions? The answer to this question is quite simple, remember the second half of 2020, when the market had a very high coefficient of speculative operations, the recommendation was prosaic, turn off the logic and emotions for a while, follow the flow of speculation, focusing on the prospects of 24-48 hours. 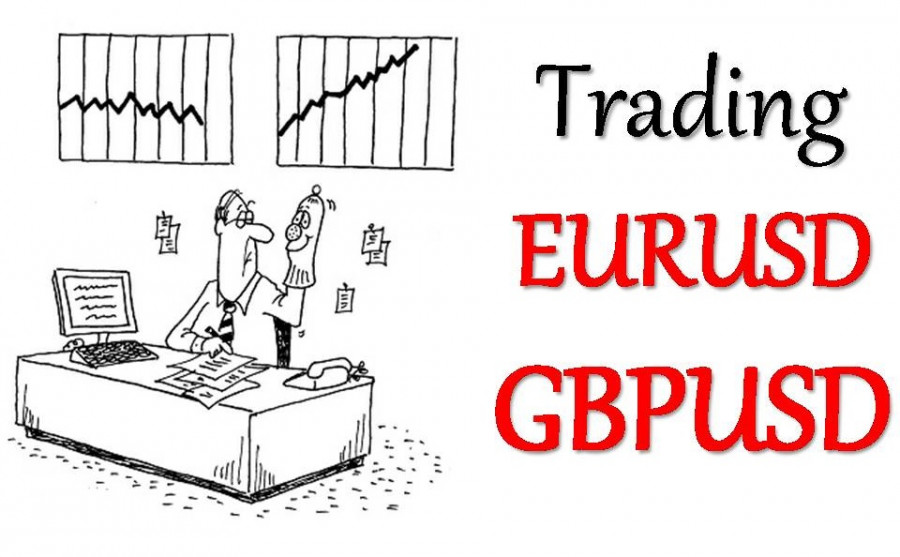 What Happens on Trading Charts?

Since the beginning of April, the Euro / Dollar currency pair has strengthened by almost 3%, which is more than 370 points of the upward movement. If we draw a parallel with the elongated correction from the peak of the medium-term trend (1.2349 -> 1.1703), then the recovery for the current day is 56%, which already signals high chances of updating the local maximum of the trend.

In this situation, where speculators are driving the quotation up, it is worth waiting for the price to hold higher than 1.2050 in the daily period. In this case, subsequent transactions in the market can lead us to such values ​​as 1.2150; 1.2240 and 1.2349.

At the same time, following the strategy of speculative excitement, be prepared for the fact that positions can change quickly, therefore, we set the cut-off in the form of a daily period higher than 1.2050 higher, since the alternative scenario may again let us into an amplitude of 1.1950 / 1.2000 / 1.2050. 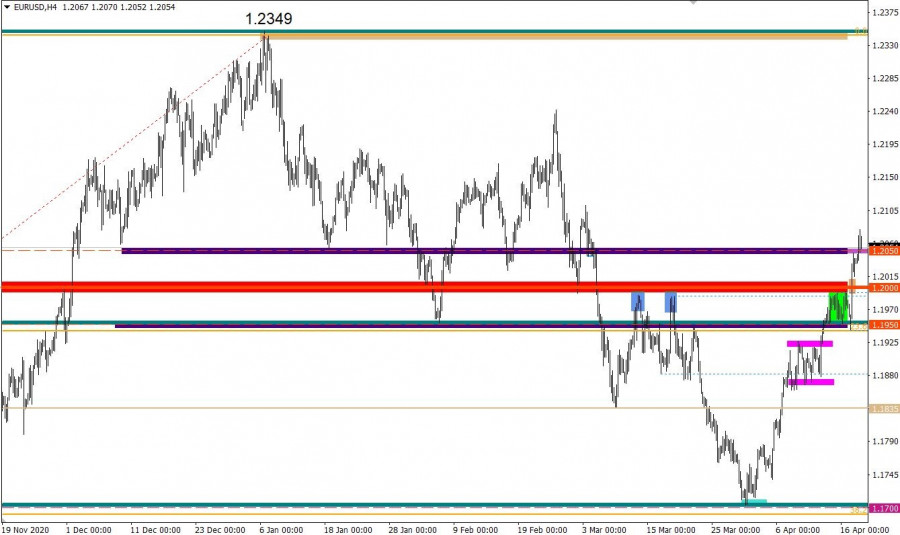 What is happening on the EURUSD chart in terms of indicator analysis and market dynamics?

Analyzing different time sectors, we see that technical instruments on the hourly and daily timeframes are firmly signaling a buy due to an intense upward movement. Minute intervals have a variable signal (buy / sell) due to a temporary slowdown. 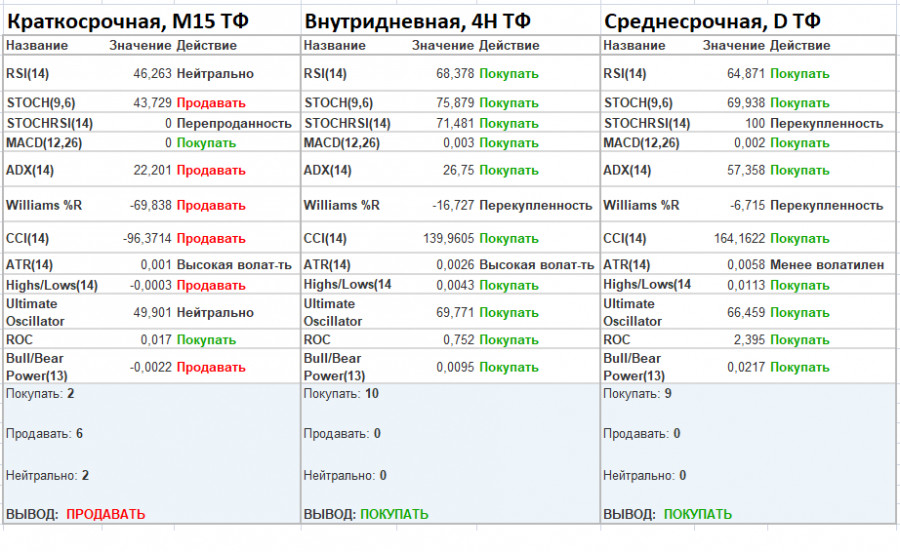 In terms of market dynamics, it can be seen that at the moment of the breakdown of the 1.2000 level, a sharp jump in volatility occurred, which was 55% higher than the average level in terms of overall dynamics. The speculative operations ratio continues to grow.

The Pound / Dollar currency pair at the beginning of the last trading week showed great hopes for a subsequent update of the local minimum of the corrective movement of 1.4224 -> 1.3668, but everything changed just a few days ago, when speculators first broke through the variable range of 1.3750 / 1, 3800, an upward direction, and then a local maximum for April – 1.3917.

In simple words, keeping the price higher than 1.4050 will open the door to speculators for a breakdown of the local high of the medium-term trend, despite the technical and fundamental factors of influence.

In this situation, all hope is that the 1.3950 / 1.4000 / 1.4050 area will negatively affect the volume of long positions in terms of reduction, which will first lead to a slowdown in the upward cycle, and then to a change in the trading interests of speculators. 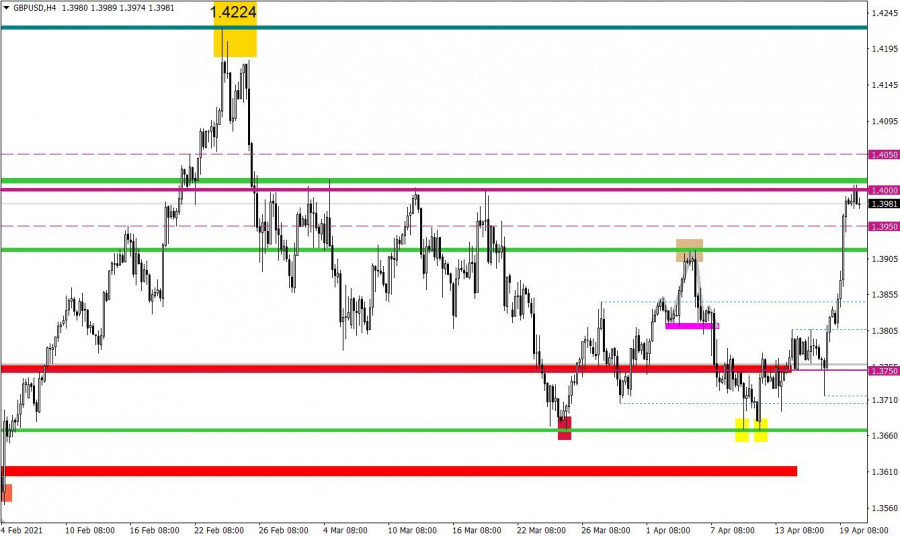 What is happening on the GBPUSD chart in terms of indicator analysis and market dynamics?

Analyzing different time sectors, we see that technical instruments signal a buy on the hourly and daily periods, in fact, there is a complete resemblance to their European counterpart. The one minute interval signals a sell due to the primary rebound from the 1.4000 level. 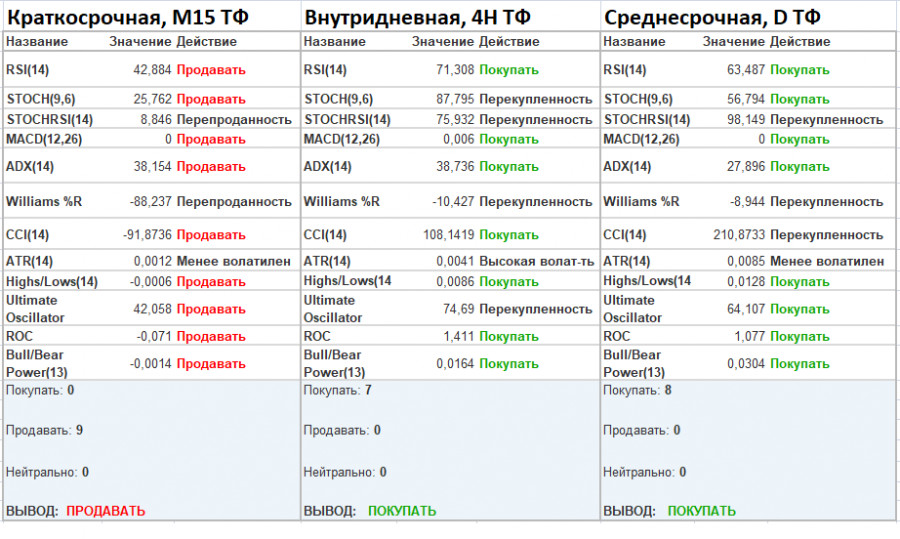 In terms of market dynamics, it can be seen that at the time of speculative activity during the previous day, the daily indicator exceeded the average level of volatility by 82%, which indicates a high status of speculative transactions.

Trading recommendations for the foreign exchange market for novice traders – EURUSD and GBPUSD 20.04.21