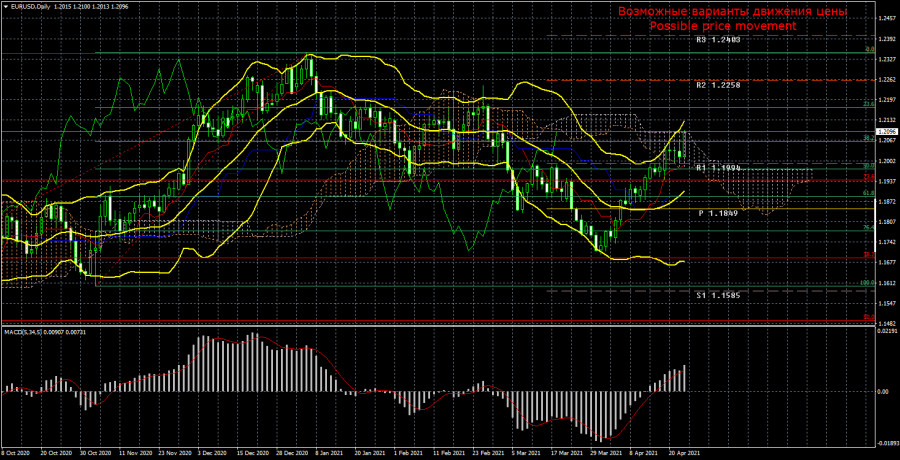 Although there were not enough macroeconomic statistics and really important news and events last week, nevertheless, we could list a whole list of possible reasons and reasons for just such a movement of the euro / dollar pair as it is now. The only problem is that many of these factors contradict each other. The most banal example: the US economy is growing, which should have a beneficial effect on the dollar exchange rate, but at the same time the money supply is growing, which lowers the dollar exchange rate on the international market. Macroeconomic indicators are on the rise, but the United States has set out to raise many taxes, which could discourage many new major investors and even force some incumbents to flee. And now the whole “foundation” consists of such “twos”, opposite in effect. Therefore, now you just need to clearly understand which factors really affect the rate of the euro / dollar pair, and which do not. We think that no one doubts the fact that the fundamental background from the European Union does not play any role now. The Eurocurrency grows again when the epidemiological and economic situation is objectively worse in the EU, not in the US, and the ECB openly compares the current state of the bloc’s economy with “a patient who stands on two crutches.” Thus, the point is, naturally, in the fundamental background of the United States, which is also quite controversial. We have already said above that, on the one hand, the US economy is recovering at a very high rate and, according to the IMF, it may be the first in the world to enter the pre-crisis trajectory of economic growth. That is, in about a year, the economy will be in such a state as if there was no crisis at all. The European Union can only dream of this now. But it is the European currency that is growing! Moreover, both in the long term and in the short term. Therefore, it turns out that the fundamental background favors the euro. It turns out that you need to look for factors that are currently not working on the side of the dollar. You won’t have to look for such a global factor for a long time. We’ve said a million times that the problem is the bloating US money supply and multi-trillion dollar stimulus packages, and nothing has changed since then. As for more local factors, here it is just possible to pay attention to the actively circulating rumors about a possible increase in a number of taxes, mainly for wealthy Americans and for large corporations. What exactly is the topic of taxes now remains key and it is she who can influence the American economy in the coming year.

Also read  Aussi Drifting At The Boundaries Of The 78th Figure

You don’t need to be an expert to understand that the higher the tax rates, the lower the investor interest in this country. Of course, not everything depends on taxes alone. If the rates are high, but at the same time the country has a huge market and huge business opportunities, then you can pay high taxes, profits will still be disproportionately higher than in countries with low tax rates, but at the same time with lower business opportunities. However, if the following situation occurs: business opportunities remain the same, and taxes are not increased by 5%, but doubled! Then, with a high degree of probability, those categories of citizens who fall under the increase in tax rates will change their point of view about the attractiveness and unattractiveness of the investment climate in this country. This is exactly what can happen in the States now. This does not mean that all millionaires and billionaires will immediately leave the country to avoid paying taxes. However, this means that a couple of trillions of dollars of capital could go into the shadows. The shadow economy is not only about developing countries. In the States, corruption and other “delights” are no less developed than conventionally in Ukraine or Russia. How can we not recall the story of Donald Trump’s taxes, when, in the middle of his presidential term, it turned out that his companies had been causing only losses for a decade and had paid $ 600 in taxes to the American treasury? Who believes that businessman and billionaire Trump really does not make anything through his companies? No, he just skillfully hides profits and cash flows. The same can happen with other billionaires and their cash flows. Also, some capital may leave the United States altogether, since it may become more profitable to do business outside the United States. In any case, raising taxes always lowers the investment climate. Thus, if the relevant legislation is adopted, then there is no doubt that the US dollar will receive another strong factor of decline. Of course, such serious legislation still needs to be pushed through two chambers of Congress. However, let us recall that in both the lower and upper chambers, the Democrats have a majority. Therefore, everything will depend only on the democrats. It is clear that the Republicans are against raising taxes. They have always defended the interests of the wealthy segment of the country’s population. However, even some Democrats are now reluctant to raise taxes. Therefore, even your own votes may not be enough. Nevertheless, it seems to us that the relevant legislation will be adopted. Thus, for 2021, the fundamental background for the dollar remains extremely unfavorable. And whatever it is now in the EU, the European currency has the highest chances of continued growth. 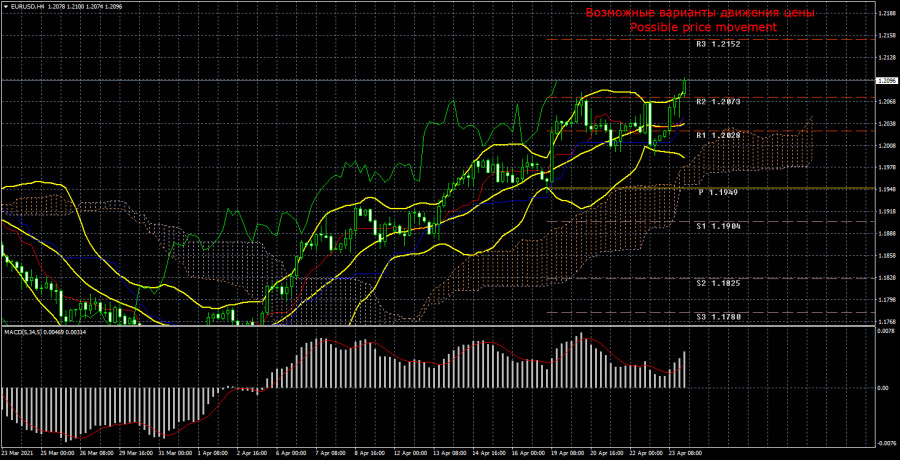 Trading recommendations for the pair EUR/USD:

The technical picture of the EUR / USD pair on the 4-hour chart is unambiguous. The upward trend is visible to the naked eye. Pullbacks in an uptrend are minimal. Thus, at this time, even targets for trading are not particularly needed. The pair has just been steadily growing for more than two weeks and can continue such a movement for another couple of weeks. Of course, a correction is brewing now. But until the price fixes below the Kijun-sen line, there is no technical basis for the downward movement. We believe that in the coming weeks the price will tend to the level of 1.2343 – the high of January 6, 2021 – the high in the last 2.5 years.