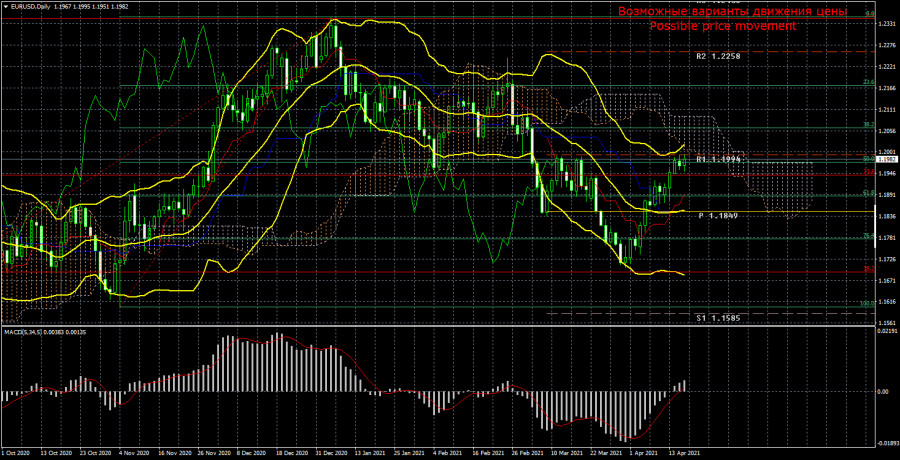 In all of our recent articles, we said that we expect the EUR / USD pair to try to resume the global uptrend. Despite the fact that the factors that are supposedly driving the pair now are not at all obvious to many, nevertheless, we continue to insist that the main factor now is the endless cash injections into the American economy by the FRS and the government of the country. Let us remind once again that in this case the most banal economic mechanism works. The amount of Eurocurrencies remains approximately the same as it was (a slight increase of 10-15% is possible), but the number of US dollars becomes 1.5-2 times larger. Naturally, the US dollar rate is declining, while inflation in the country is growing. And in 2021, this process will continue, as the first stimulus package has just begun to be implemented, and the pandemic is retreating in the United States, which will contribute to the growth of economic and business activity, and the Americans will sooner or later start the 1.5 trillion accumulated during the pandemic. dollars, and the second stimulus package could be approved by the summer. Thus, the flow of US dollars into the economy should not subside this year, which is why we believe that the global upward trend will be resumed. The European currency has been showing growth over the past two weeks. Of course, it could be a correction versus a correction. The trouble is that no pair can move evenly and based only on “foundation” and “statistics.” That is, most of the movements that many analysts and experts try to explain by fundamental factors and events are in fact just technical corrections and pullbacks. Thus, the last 2-week up move could just be a pullback. On the other hand, it looks quite solid, and we believe that this is the beginning of a new round of an uptrend, which is based precisely on the factors that we talked about above. After all, if you think about it, what are the reasons for the European currency to grow now? You can take a piece of paper with a pen and try to list the factors of the growth of the dollar and the factors of the growth of the euro. We make sure that the list in the second column will be much smaller. Take even only macroeconomic factors. The American economy is accelerating at a very high rate (thanks to endless cash infusions), but the European one continues to stall. In Europe, the third wave of the pandemic, problems with vaccines, problems with economic growth, problems with the Recovery Fund, which has not even been formed yet. Thus, there is no budgetary incentive for the countries most affected by the pandemic, and, accordingly, there is no recovery. By “no recovery” we mean a slow pace. If we take into account exclusively macroeconomics, it becomes clear that it is precisely the US dollar that should grow, the demand for which should also increase, thanks to the desire of investors to invest money in the American economy, in American companies and the American stock market. By the way, this is exactly what is happening now, as the US stock market continues to grow and update records almost every day. However, as we can see, the US dollar is not growing. And there can be only one explanation for this, from our point of view: the dollar is influenced by much more global factors than “macroeconomics”. Imagine a world where there is only 1 product and $ 100. Hence, the price of a single item is $ 100. Suddenly you have another $ 200. Now the cost of all goods is $ 300. And the product is still one.

Thus, we believe that even if tomorrow Jerome Powell publicly announces a key rate hike next month, and then the Fed raises it, this will not reverse the trend downward. Yes, within the day, most likely, there will be a serious strengthening of the US dollar, but it will not be long-term. Please note: all recent US macroeconomic reports have been strong enough. Starting from Nonfarm Payrolls, ending with inflation. Why, then, does the US currency fall? Jerome Powell, in all his recent speeches, constantly notes how well the economy is recovering, and the rate of vaccination in the United States is one of the highest in the world. But the dollar is falling. Think about it.

Next week there will be only one event in the European Union that really deserves attention. This event is a meeting of the ECB. However, what can we expect from the European regulator now? There is no talk of curtailing the QE program now. There is nothing to say about the rate hike. Accordingly, the only thing we can expect is Christine Lagarde’s performance. But even in the case of the head of the ECB, what can we expect from her? In her last talk, she compared the European economy to a patient standing on his feet with two crutches. Obviously, Lagarde’s rhetoric is currently pessimistic and is unlikely to change much towards optimism in a week. Thus, from our point of view, the meeting will be a passing one. On Friday, the European Union will also publish business activity indices in the services and manufacturing sectors, to which the markets have not responded for a long time. If the real values ​​differ greatly from the forecasts, then traders will be able to count on the movement of 30-40 points within the day, but no more. The main question is: will the service sector be able to return above 50.0 or not? In general, in Europe next week there will be very little interesting information (planned).

Also read  As the European economy improves soon, the euro will rise to $ 1.25 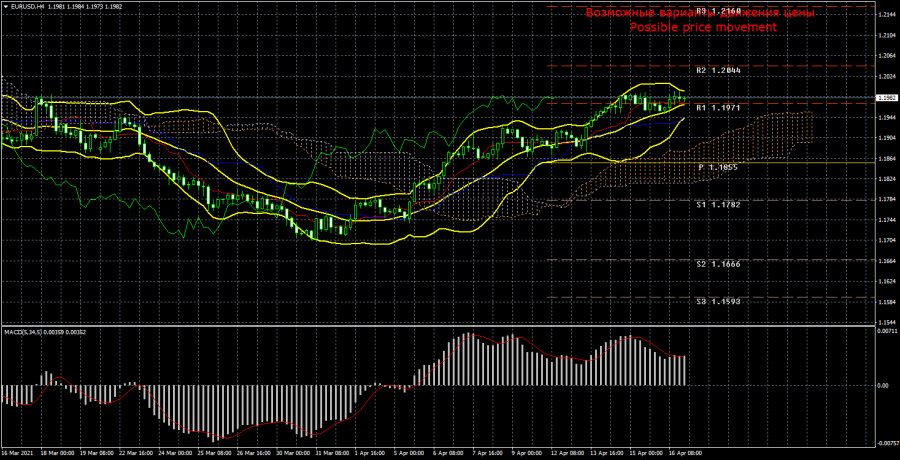 Trading recommendations for the pair EUR/USD:

The technical picture of the EUR / USD pair on the 4-hour chart shows that the upward trend continues, but the volatility is very low. Despite the fact that the pair rose by 95 points during the week, by and large, it was these 95 points that it passed from the minimum to the maximum. That is, the average daily volatility last week was 40 points. On Friday, the market “died” in general. Nevertheless, it is still recommended to trade for an increase, especially since all indicators are now signaling an increase in the EUR / USD pair. The nearest target levels are located around 1.2044 and 1.2090.