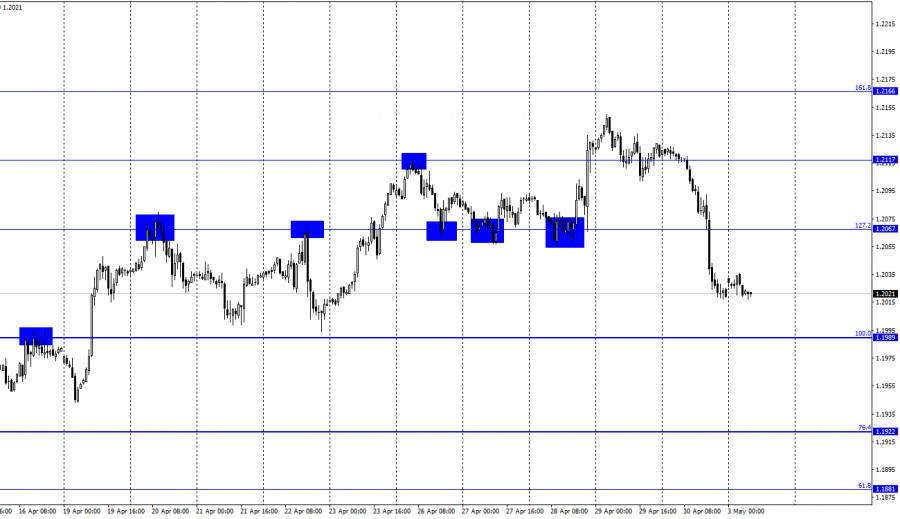 Good afternoon, dear traders! The EUR / USD pair during the last trading day performed a reversal in favor of the US dollar and a strong fall, which continues at this time in the direction of the correctional level 100.0% – 1.1989. This drop in quotes broke the whole graphical picture on several timeframes at once. And the most interesting thing is that there were no compelling reasons for such a fall. But there was a strong information background, which could and should have caused just such a strong movement. The most interesting reports came out on Friday in the European Union. In particular, this is the report on GDP for the first quarter. The report showed that in the first quarter the EU economy contracted by 0.6% qoq and by 2.0% yoy. The forecasts were worse, but in any case, the fall of the European economy is a negative factor for the euro. Also released was the report on unemployment, which unexpectedly fell from 8.2% to 8.1%, although traders expected it to increase to 8.3-8.4%. Also, inflation came out in April, which rose to 1.6% y / y, but at the same time core inflation, on the contrary, fell to 0.8% y / y. In general, traders could indeed interpret these reports as negative, especially considering that until last Friday, the European currency has been growing steadily for a long period of time. True, the drop in quotations began several hours earlier than the release of these reports, but with their release, it intensified. Thus, we can conclude that traders reacted by selling to European reports, as well as the fact that they were in any case set to sell the euro last Friday. There are no graphical constructions on the hourly chart now, so no special conclusions can be drawn. Older charts should be considered.

Also read  Reflections on the results of the Bank of Russia meeting, what to expect from the dollar exchange rate? 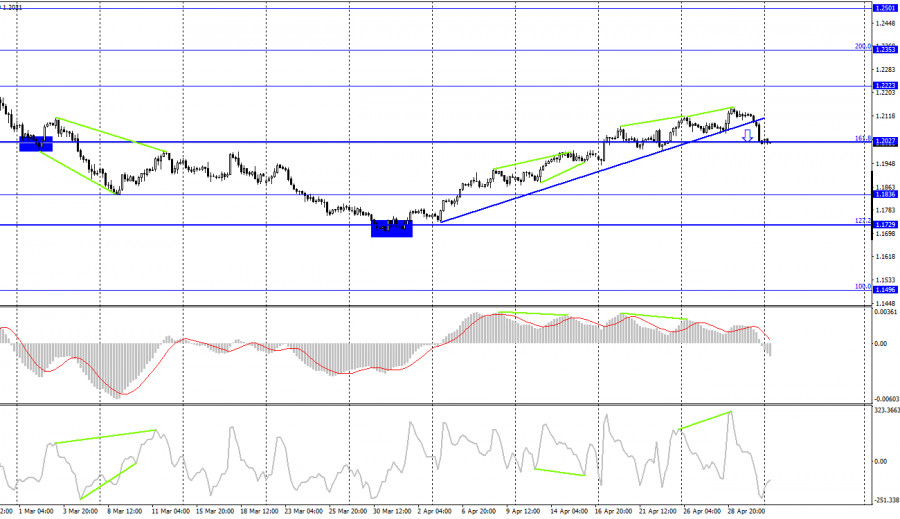 On the 4-hour chart, the pair reversed in favor of the US dollar and closed below the uptrend line. Thus, traders’ sentiment is now characterized as “bearish”, and the chances of a further fall have increased and will grow even more if traders manage to close below the Fib level of 161.8% – 1.2027. None of the indicators have any maturing divergences today. 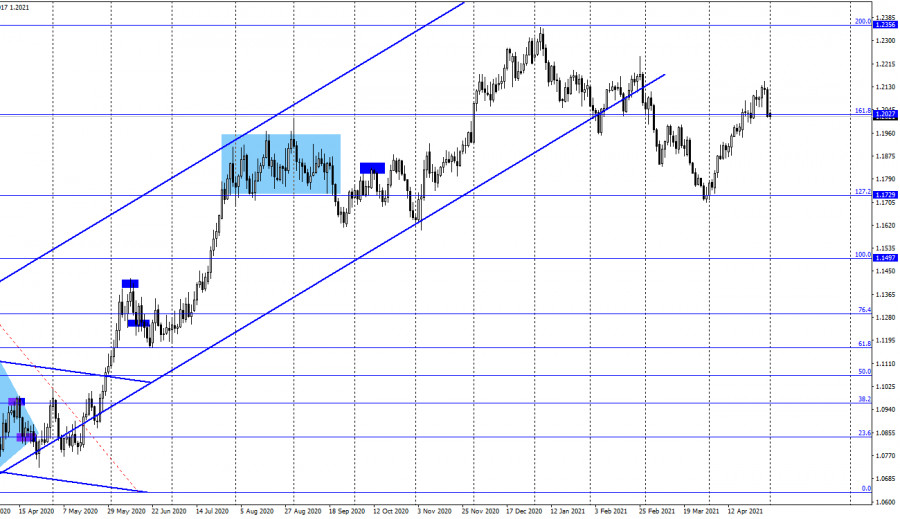 On the daily chart, the quotes of the EUR / USD pair performed such a drop on Friday, which led to the cancellation of the downtrend line and the revision of the Fibonacci grid. But even with these changes, it has not become clearer and easier. Thus, for now, I recommend paying more attention to the 4-hour chart, where the picture is more or less clear. 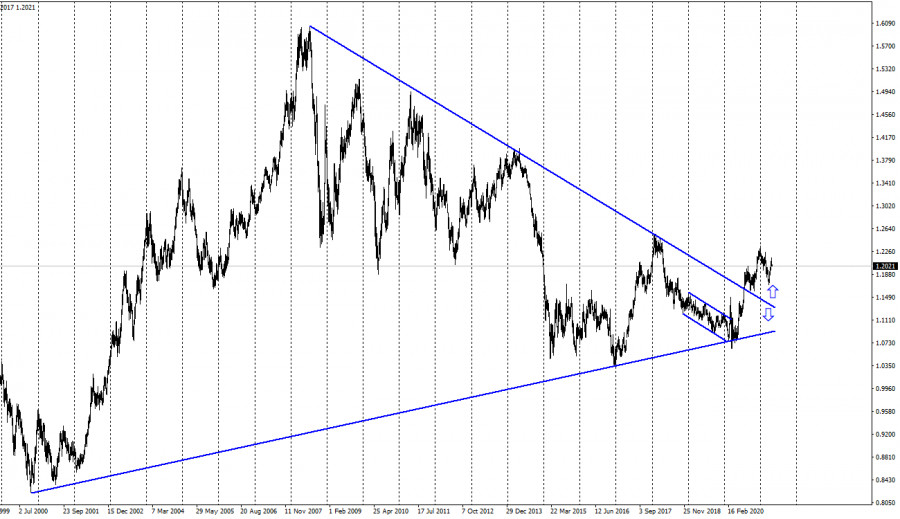 On the weekly chart, the EUR / USD pair has completed the consolidation above the “narrowing triangle”, which preserves the prospects for further growth of the pair in the long term.

On April 30, the European Union released important reports that allowed the dollar to grow, but reports from America itself only helped the dollar continue to grow on Friday.

News calendar for USA and EU:

On May 3, the US and the European Union will release reports on business activity in the areas of manufacturing, but the more important event of the day will be Jerome Powell’s speech in the evening. 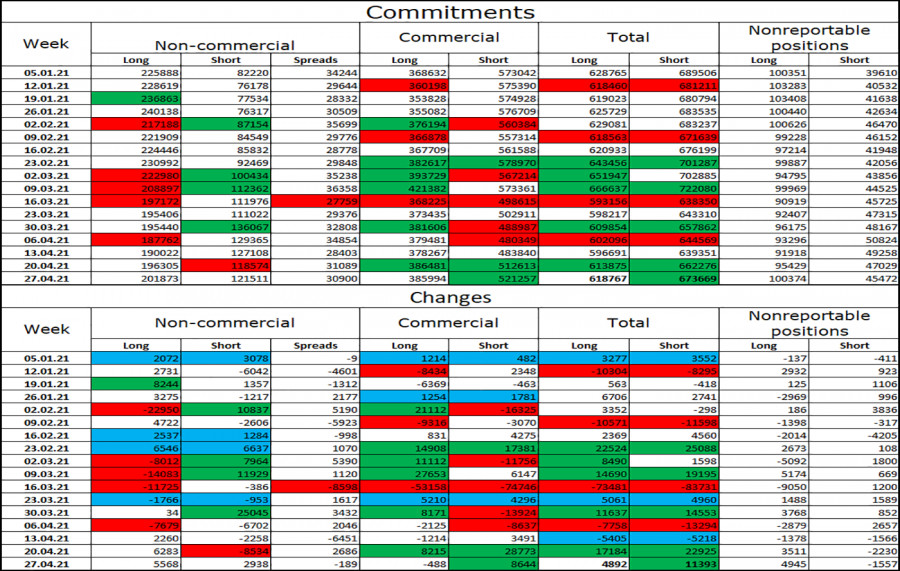 Last Friday, another COT report was released, which again showed that the “bullish” mood of major players is strengthening, which means that the European currency has new opportunities to continue the growth process. The number of new open Long-contracts by the “Non-commercial” category of traders is 5568, and the number of Short contracts is 2938. Thus, the “bullish” mood of this category of traders has increased, but not too much. Let me remind you that since the beginning of this year, the gap between the total number of Long and Short contracts among speculators has been narrowing, which indicates just a weakening of the “bullish” mood. But in the past three weeks it has steadily increased.

Forecast for EUR/ USD and recommendations for traders:

I recommended selling the pair if it closes below the trendline on the 4-hour chart with targets at 1.1989 and 1.1922. At this time, you can leave these transactions open. Shopping for the pair is not recommended today as there are no shopping guidelines.