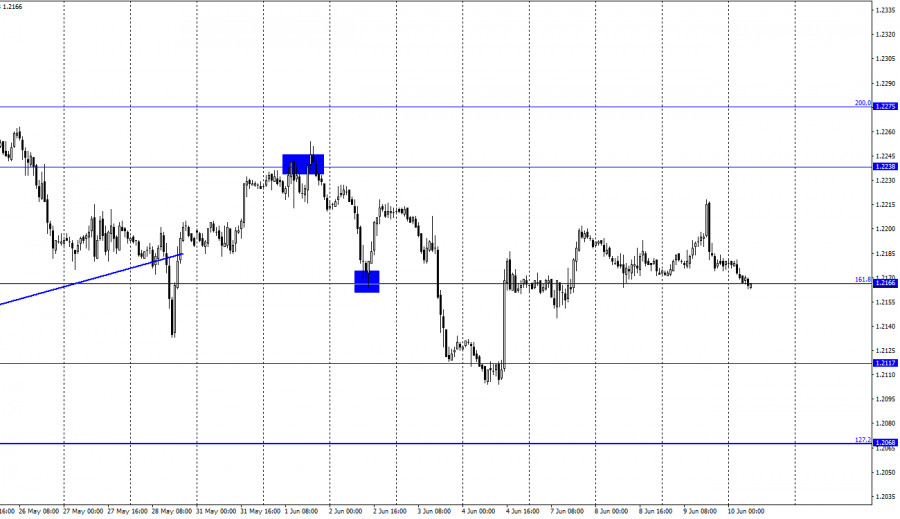 Good afternoon, dear traders! The EUR / USD pair during Wednesday, June 9, tried to start a new growth towards the level of 1.2238, however, bull traders very quickly lost their fuse and quotations by this morning fulfilled a fall to the Fibo level of 161.8% – 1.2166. The rebound of the pair from this level will allow counting on a new growth process in the direction of 1.2238, and a close below it – on a further fall in the direction of the 1.2117 level. However, the level 1.2166 did not always allow the formation of a signal near itself. Moreover, today there will be several significant events for the euro-dollar pair, which can greatly influence the mood of traders during the day. This is primarily about the ECB meeting. Most analysts agree that the parameters of monetary policy will remain unchanged. The ECB has repeatedly stated that rates will begin to rise no earlier than the moment when inflation reaches a stable 2% in the medium term.

In May, for the first time in recent years, inflation reached the level of 2% y / y. Thus, there is no need to talk about any medium-term effect yet. Christine Lagarde also said that the current surge in inflation is driven by low inflation last year, as well as rising energy prices. The representatives of the Fed and the Bank of England also believe that the rise in inflation is a temporary phenomenon and the consumer price index may begin to decline by the end of the year. The same goes for the PEPP Economic Assistance Program. It is designed to be valid until the end of March 2022, and, given that the EU economy is just beginning to recover from the crisis, there is no reason to expect an early withdrawal of the stimulus program. Thus, the most interesting event could be the speech of the chairman Christine Lagarde.
EUR/USD – 4H. 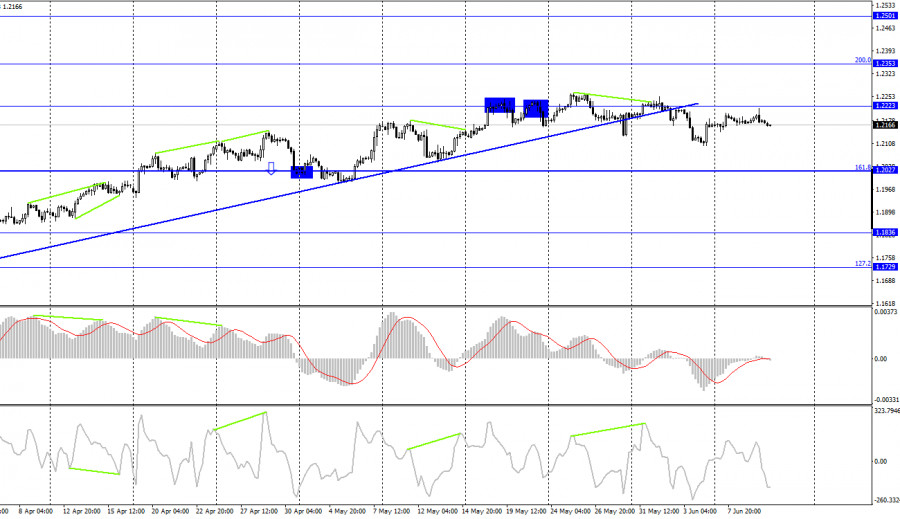 On the 4-hour chart, the pair rose to the level of 1.2223, but there was no rebound from this level. Thus, the quotes made a reversal in favor of the US currency and began a new fall in the direction of the correction level 161.8% – 1.2027, however, this fall is very weak, and the whole movement has been very unstable in recent weeks.
EUR/USD – Daily. 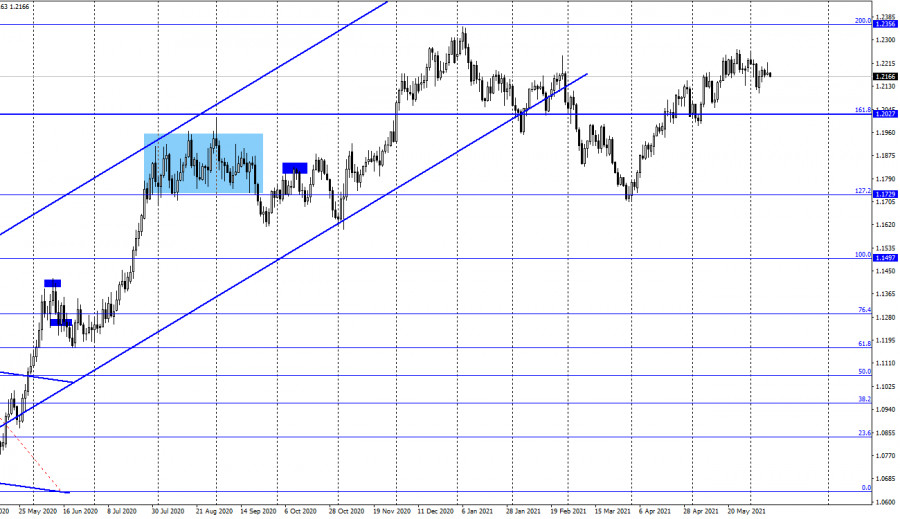 On the daily chart, the quotes of the EUR / USD pair closed above the level of 161.8% – 1.2027. But at the moment, all charts signal different movements and directions. There is no unity of the graphic picture. Unstable situation.
EUR/USD – Weekly. 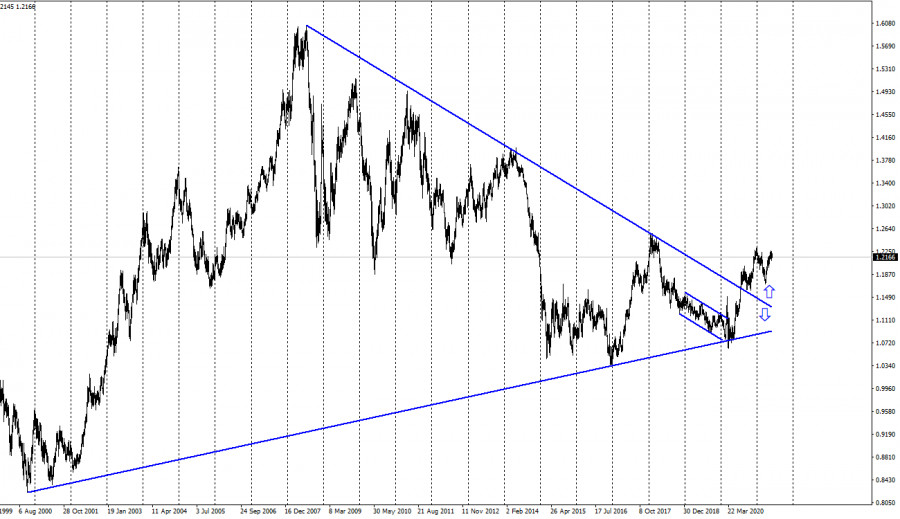 On the weekly chart, the EUR / USD pair has completed the consolidation above the “narrowing triangle”, which preserves the prospects for further growth of the pair in the long term.
News overview:
On June 9, in America and the European Union, the calendars of economic events were completely empty, so there was no information background.
News calendar for USA and EU:
European Union – Publication of the ECB’s decision on the basic interest rate (11-45 UTC).
European Union – Monetary Policy Report (11-45 UTC).
European Union – ECB Press Conference (12-30 UTC).
USA – Consumer Price Index (12-30 UTC).
On June 10, a very important report on inflation will be released in the United States, and at about the same time the results of the ECB meeting will be released in the European Union, as well as a press conference with Christine Lagarde. Today the information background can be very strong.
Отчет COT(Commitments of traders): 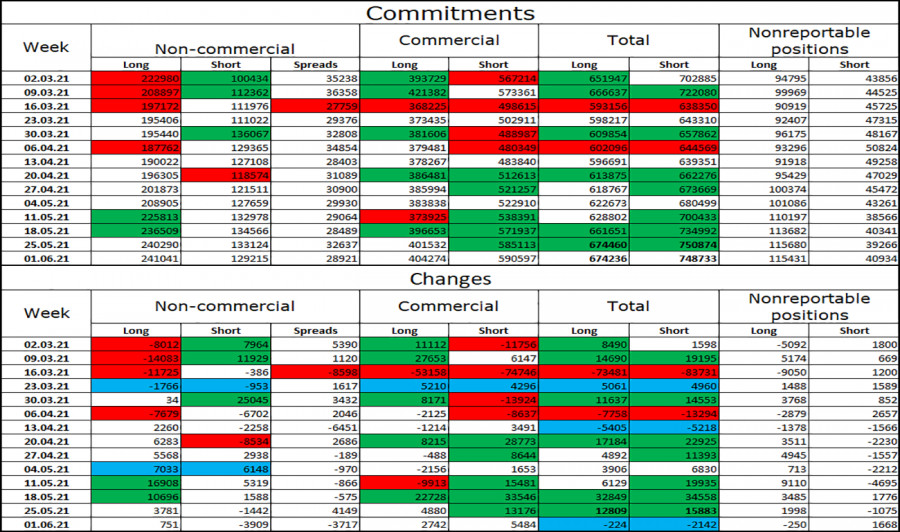 Last Friday, another COT report was released, which again showed the strengthening of the bullish mood among speculators. The “Non-commercial” category of traders opened only 751 Long contracts, but at the same time got rid of almost 4 thousand Short contracts. Thus, speculators continue in one way or another to promote the growth of the European currency. In general, the changes for all categories of traders are minimal. In total, 224 Long contracts and 2,142 Short contracts were closed, which indicates low activity of major players in the reporting week.
Forecast for EUR / USD and recommendations for traders:
I recommend selling the pair in case of a rebound from the level of 1.2223 on the 4-hour chart with targets at 1.2166 and 1.2117. I recommend buying the pair in case of an exact rebound from the correction level 161.8% – 1.2166 on the hourly chart with the target of 1.2238.
TERMS:
“Non-commercial” – large market players: banks, hedge funds, investment funds, private, large investors.
“Commercial” – commercial enterprises, firms, banks, corporations, companies that buy currency not to obtain speculative profit, but to ensure current activities or export-import operations.
“Non-reportable positions” are small traders who do not have a significant impact on the price.