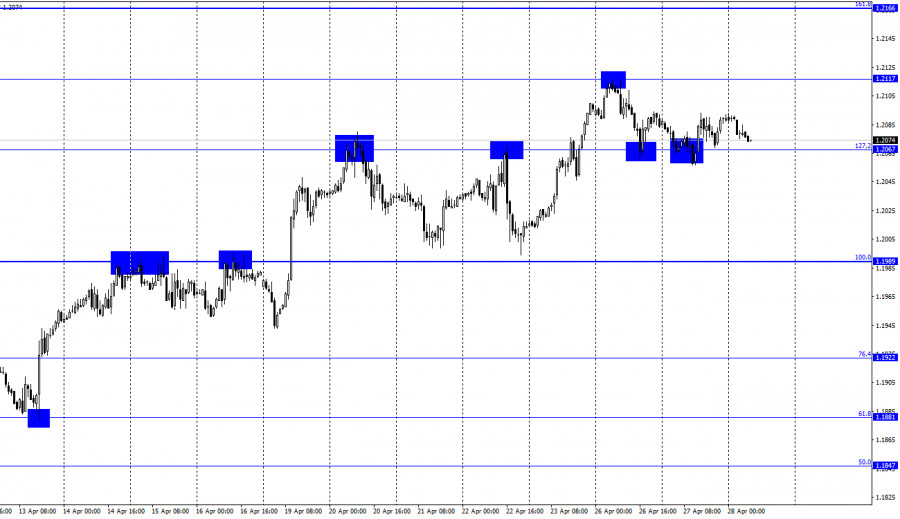 Good afternoon, dear traders! The EUR / USD pair during the last day completed a new fall to the correction level of 127.2% – 1.2067, rebound from it, a slight increase, and at this time is again approaching this level. Thus, we can say that the activity of traders was very low yesterday. There were no interesting events during the day. Fixing the pair rate below 127.2% will work in favor of the US currency and continue to fall in quotations in the direction of the correctional level of 100.0% – 1.1989. Perhaps the most interesting news of recent days was the litigation between the European Union and the company AstraZeneca, which produces vaccines against coronavirus. The European Commission did not wait for the delivery of the vaccine on time and in full, according to the contract with the company, so it decided to file a claim with a Belgian court.

According to various sources, in the first quarter, the British-Swedish company AstraZeneca did not supply up to 90 million doses of the vaccine to the European Union. The European Commission expected the situation to improve in the second quarter, but the first month of this quarter showed that this is unlikely to happen. Thus, the AstraZeneca company and the AstraZeneca vaccine remain the most problematic of all the other vaccines recognized in the world. Let me remind you that vaccines from Pfizer and Moderna have the best reviews. It was these vaccines that the European Union switched to. However, of course, this news had no effect on the euro-dollar pair. Moreover, they are not even economic. And in recent days there was no economic news at all. Today the Fed meeting ends, and traders can finally get some important information. But this event is scheduled for late evening, and during the day the same “news calm” can be observed.
EUR/USD – 4H. 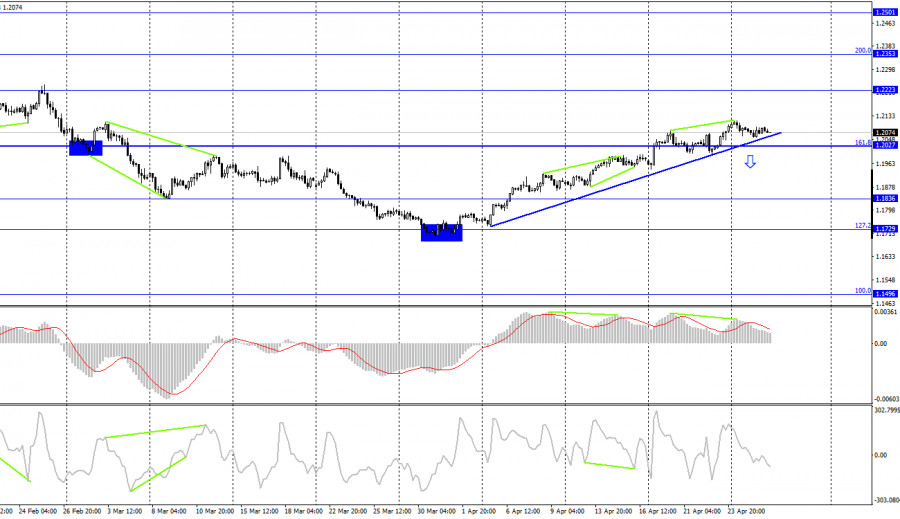 On the 4-hour chart, the pair’s quotes resumed the growth process after several days of ordeals around the level of 161.8% – 1.2027. However, almost immediately, the bearish divergence worked in favor of the US currency and a new process of decline began in the direction of the uptrend line. Closing below the trendline failed, so a pullback could be triggered in favor of renewed growth towards the 1.2223 level. Fixing quotes below the trend line will increase the likelihood of further falling in the direction of 1.1836.
EUR/USD – Daily. 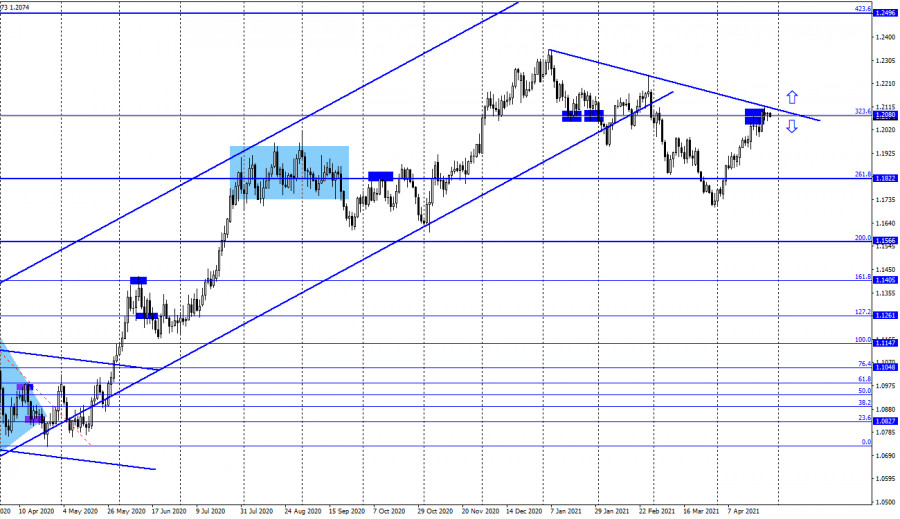 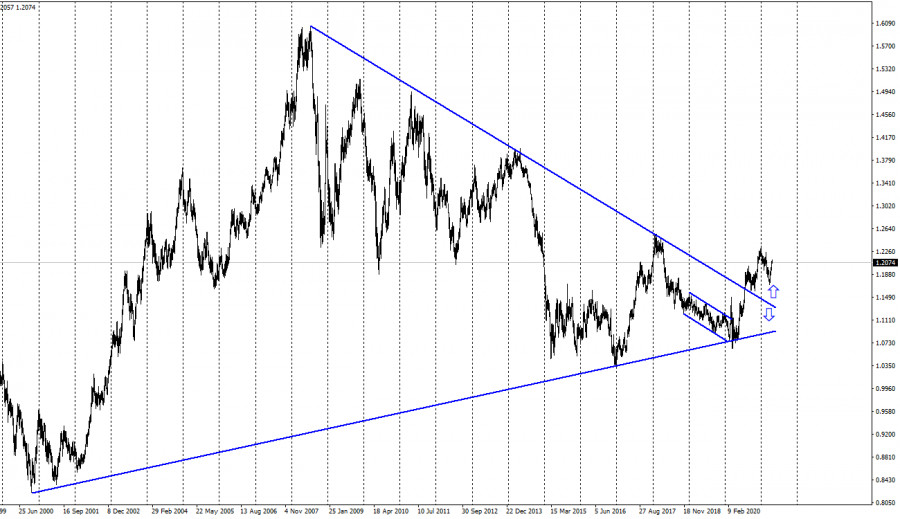 On the weekly chart, the EUR / USD pair has completed the consolidation above the “narrowing triangle”, which preserves the prospects for further growth of the pair in the long term.
News overview:
On April 27, there was not a single important economic event or report in the European Union and the United States. There was simply no information background that day.
News calendar for USA and EU:
European Union – ECB President Christine Lagarde will deliver a speech (14-00 UTC).
USA – FOMC decision on base interest rate (18-00 UTC).
USA – FOMC Covering Statement (18-00 UTC).
USA – FOMC Press Conference (18-00 UTC).
On April 28, the calendars of economic events in the United States and the European Union contain a speech by Christine Lagarde and the results of the Fed meeting with a press conference by Jerome Powell.
Отчет COT(Commitments of traders): 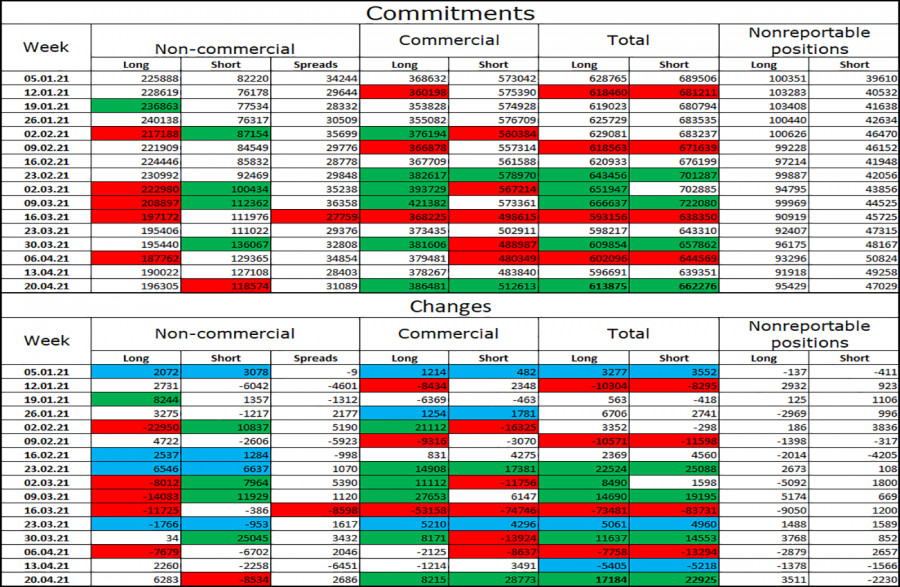 Last Friday, another COT report was released, which turned out to be very, very eloquent. At the moment, a bullish trend has formed on many charts, or it is about to form. As it turned out, the category of traders “Non-commercial” during the reporting week were engaged in building up Long-contracts and closing Short. The first ones were opened 6283, the second closed 8534. Thus, the “bullish” mood of speculators is again strengthening, which gives reason to expect the continuation of the growth of the euro. The gap between the total number of Long and Short contracts in the hands of major players is increasing again.
Forecast for EUR / USD and recommendations for traders:
I recommend selling the pair if it closes below the trendline on the 4-hour chart with targets at 1.1989 and 1.1922. I recommend buying the pair today when rebounding from the trend line on the 4-hour chart with targets at 1.2117 and 1.2166.
TERMS:
“Non-commercial” – large market players: banks, hedge funds, investment funds, private, large investors.
“Commercial” – commercial enterprises, firms, banks, corporations, companies that buy currency not to obtain speculative profit, but to ensure current activities or export-import operations.
“Non-reportable positions” – small traders who do not have a significant impact on the price.

Also read  Forecast and trading signals for EUR / USD for April 27. Detailed analysis of yesterday's recommendations and the movement of the pair during the day.
Tags: EURUSD