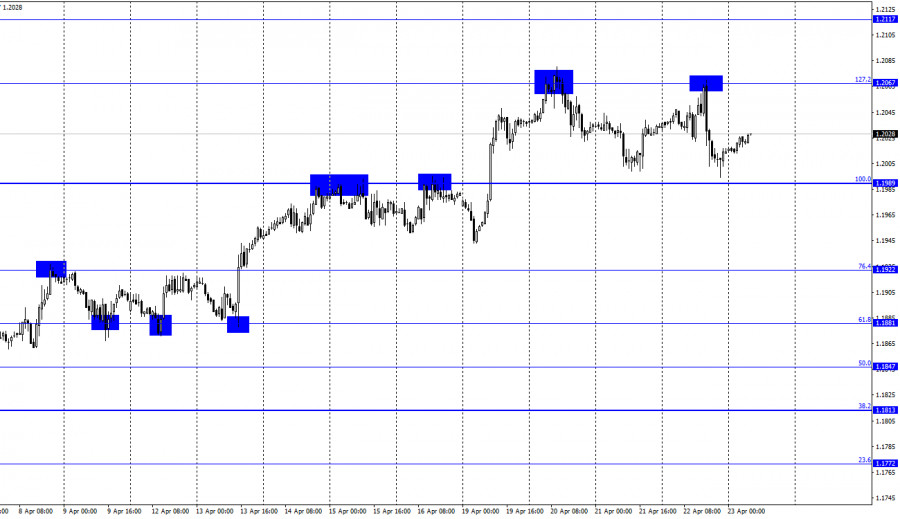 Good afternoon, dear traders! The EUR / USD pair during yesterday completed an increase to the correction level of 127.2% – 1.2067, rebounding from it and starting a new round of decline in the direction of the correctional level 100.0% – 1.1989. However, on the way to the level of 100.0%, there was a reversal in favor of the European currency and now the growth process can be resumed. The bear traders failed to close below the nearest important level, so yesterday’s fall may be just a slight correction. Which was caused exclusively by yesterday’s results of the ECB meeting. All the main parameters of monetary policy remained unchanged. The most important rate on deposits is at the level of -0.5%. The volume of the emergency bond purchase program has not changed either – 1.85 trillion euros, as well as its duration – until the end of March 2022.

However, traders were ready for all this, so initially the market was not particularly worried about this. The fall of the European began when the speech of the ECB President Christine Lagarde began. She announced that the PEPP program will be extended and increased in size if necessary. As it turned out from a press conference with Lagarde, the ECB board of directors did not discuss at all the possible curtailment of the program to support the economy during 2021. Lagarde said that stimulus to the economy will continue until inflation reaches a stable 2% per year. Thus, the rhetoric of the ECB chairman turned out to be exclusively “dovish”, which could not but cause the fall of the European currency. Although, as I said above, this has not yet influenced the existing trends.
EUR/USD – 4H.

Also read  Deutsche Bank: US stock market may decline by 10% in the next three months 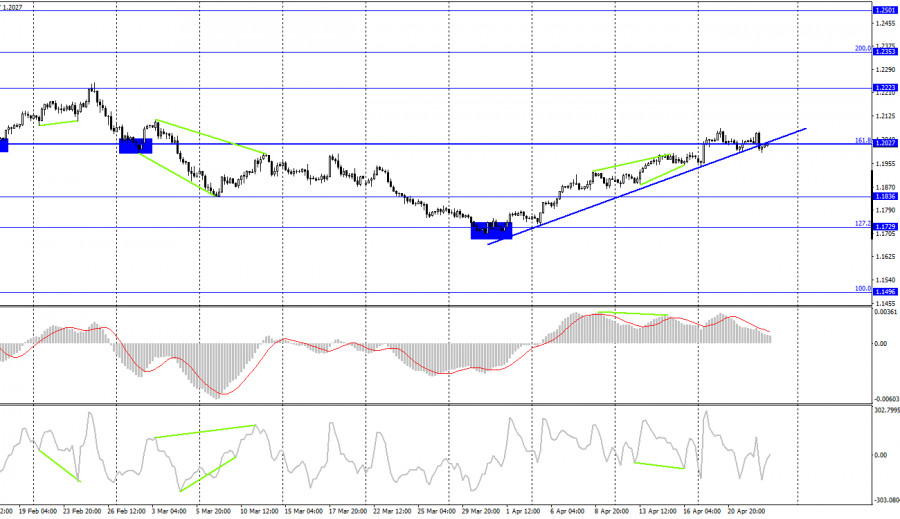 On the 4-hour chart, the quotes of the pair have completed the fixation below the trend line, but it is very weak, like the trend line itself. Thus, I would not recommend paying too much attention to this point. The same is true for the level of 161.8% – 1.2027. Now it is rather difficult to say whether the pair closed below it or intends to resume the growth process with a rebound from it.
EUR/USD – Daily. 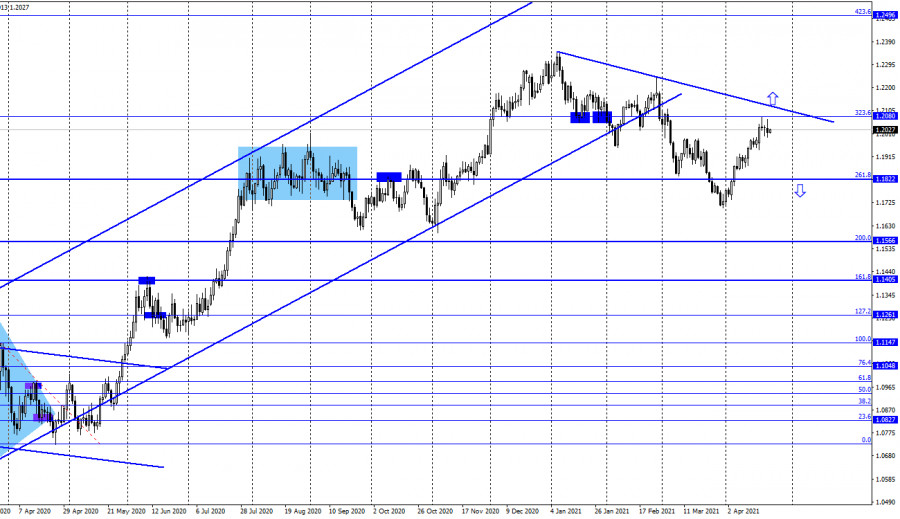 On the daily chart, the quotes of the EUR / USD pair bounced off the correction level of 323.6% – 1.2080, which allows counting on a reversal in favor of the US currency and a renewed fall in the direction of the Fibo level of 261.8% – 1.1822. Closing quotes above the trend line will significantly increase the likelihood of continued growth in the pair towards the level of 1.2496.
EUR/USD – Weekly.

Also read  The dream of wealthy Americans will never be the same again. New wealth tax in the United States. Euro rests and does not want to go 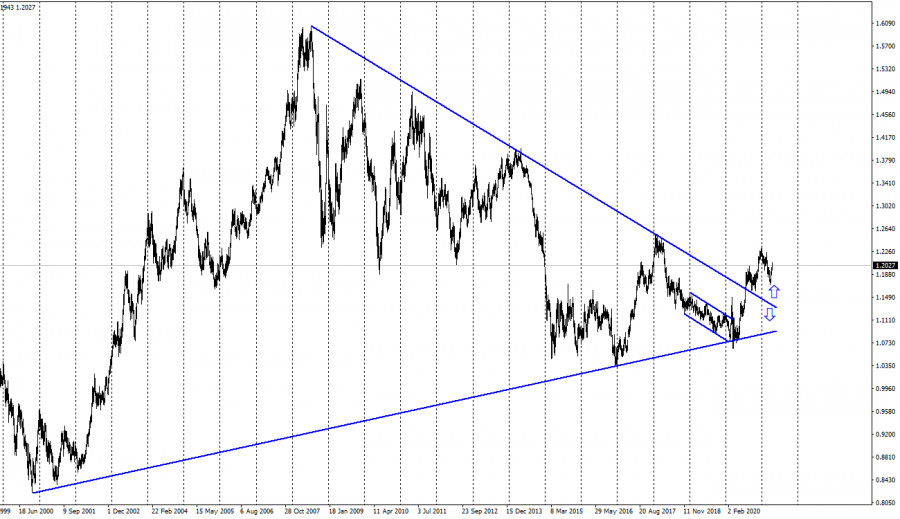 On the weekly chart, the EUR / USD pair has completed the consolidation above the “narrowing triangle”, which preserves the prospects for further growth of the pair in the long term.
News overview:
On April 22, in addition to events related to the ECB, there was nothing more interesting in the European Union, and in the United States, a report on claims for unemployment benefits was released, which turned out to be better than traders’ expectations.
News calendar for USA and EU:
European Union – Manufacturing PMI (08-00 UTC).
European Union – Index of business activity in the services sector (08-00 UTC).
USA – Manufacturing PMI (13-45 UTC).
USA – PMI for Services (13-45 UTC).
European Union – ECB President Christine Lagarde will deliver a speech (14-35 UTC).
USA – Secretary of the Treasury Janet Yellen will deliver a speech (14-35 UTC).
On April 23, the European Union and the United States will publish business activity indices in the service and manufacturing sectors, as well as presentations by Christine Lagarde and Janet Yellen.
Отчет COT(Commitments of traders): 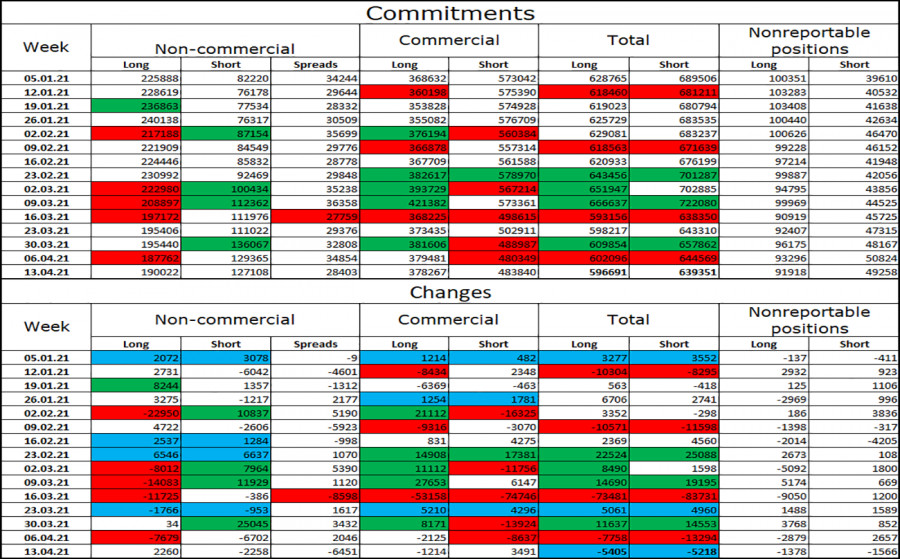 Last Friday, another COT report was released, which turned out to be quite neutral. During the reporting week, non-commercial traders opened 2,260 Long contracts and closed 2,258 Short contracts. Thus, the mood of speculators has become a bit more bullish again. Considering that the pair is growing on the two lowest charts, everything is logical. Moreover, in general, speculators also retain a bullish mood, since the number of Long contracts concentrated on their hands still exceeds the number of Short contracts. Not as much as before, but still exceeds.
Forecast for EUR / USD and recommendations for traders:
I recommend selling the pair if it closes below the Fib level of 100.0% – 1.1989 on the hourly chart with the target at 1.1922. I recommend buying the pair when closing above the trend line on the daily chart.
TERMS:
“Non-commercial” – major market players: banks, hedge funds, investment funds, private, large investors.
“Commercial” – commercial enterprises, firms, banks, corporations, companies that buy currency not to obtain speculative profit, but to ensure current activities or export-import operations.
“Non-reportable positions” are small traders who do not have a significant impact on the price.