Timber prices in the US are skyrocketing amid strong economic recovery after the pandemic. Previous price records have already been broken, with sawmills struggling to meet demand ahead of the peak of the construction season.

Lumber futures have skyrocketed more than 50% this year, topping $ 1,327 per 1,000 board feet as home builders and home improvement stores are forced to grapple with dwindling supplies. This has boosted profits since the Covid-19 crisis to 400%, well above the previous contract high of $ 650 set in 2018.

The physical market is also red-hot, with lumber pricing company Fastmarkets Random Lengths, which saw the price of the main timber framing product – a 2 × 4 cut of Western Spruce-Pine-Spruce 2 × 4 – jumped 30% to $ 1,205 since the beginning of the year. That’s nearly $ 900 more than the average price since 2005.

Experienced market players are amazed at the scale of the rally and argue that it reflects the inflationary challenges facing the US economy as it emerges from the isolation that has eroded stocks and production.

“I have followed these markets for 37 years and have never seen such madness,” said Mark Wilde, analyst at BMO Capital Markets. 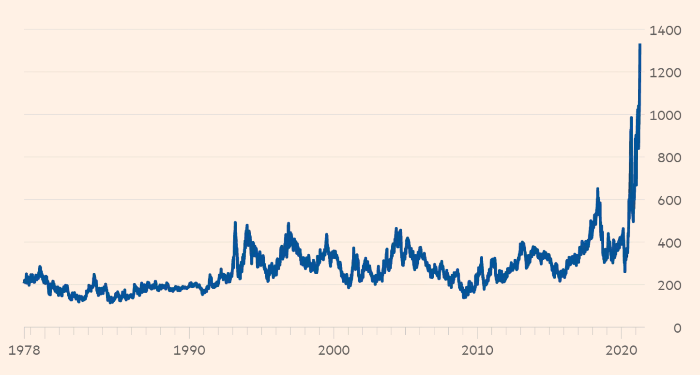 Lumber, which is sawn timber and planks, is the main building material in the United States, where about 90% of modern homes are built with timber frames.

Supply restrictions have already raised concerns. The National Association of Home Builders recently called on US Secretary of Commerce Gina Raimondo to investigate and “take immediate action that will increase production.” One proposal is for the Biden administration to lower tariffs on imports from Canada, the largest sawnwood exporter to the United States.

The National Association of Home Builders estimates that the rise in lumber prices since last spring has increased the cost of building an average new private home by more than $ 24,000 and is now between $ 300,000 and $ 330,000.

“We just don’t produce enough building lumber in the US,” said Robert Diez, chief economist at NAHB. “This is part of a bigger story … supply chain disruptions and this is likely to generate some inflationary pressures in 2021 when there is a surge in economic growth.”

At the same time, imports, especially from Canada, which supplies nearly a third of American lumber, are now lower than in 2016 due to tariffs and the invasion of pine beetles that are destroying forests in British Columbia.

Housing starts at a peak since 2006 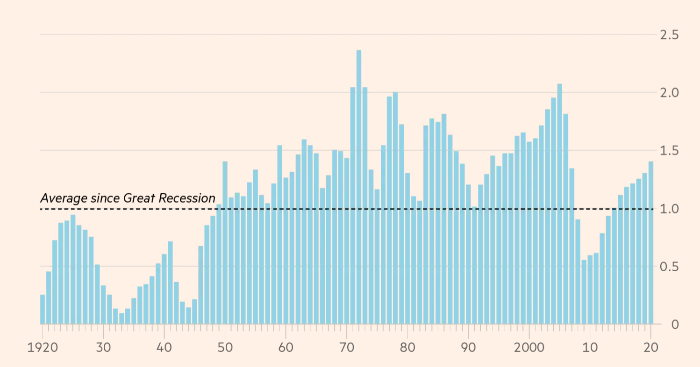 “It’s a set of circumstances, including very strong demand and a very slow supply response due to a decade of under-construction and Covid,” said Paul Jahnke of Forest Economic Advisors.

The ground for the sawn timber rally was prepared last year, he said. As the pandemic spread across North America, many sawmills cut production in anticipation of a sharp decline in demand. Dealers also ordered fewer materials and reduced inventory.

But demand did not fall. On the contrary, it has strengthened as the isolation spawned a wave of home improvement and renovation projects. Lumber prices also rose on the back of low interest rates, which accelerated the recovery in housing demand as city dwellers moved into private homes.

“After the financial crisis, we went through a decade of under-construction, so there is high pent-up demand, driven by low interest rates and the desire to move out of town,” added Jahnke.

The National Association of Home Builders expected a 4% increase in private home construction in 2020. Instead, it was 12%, bringing the total to a million for the first time since the financial crisis.

Activity also remains strong this year, with total home construction up 19.4% in March to a seasonally adjusted 1.74 million units year, the highest since June 2006.

Taken by surprise, sawmills and dealers were unable to resupply. As the peak season for home construction approaches, inventories remain critically low.

“The sawmills don’t have enough capacity to produce enough lumber, but that hardly justifies the $ 1,200 price tag,” added Jahnke. “If there were stocks, prices would most likely peak at around $ 700 or $ 800.”

On the supply side, the downturn in the housing market following the financial crisis led to the closure of a large number of sawmills. In 2005, manufacturing capacity in North America was 80.7 billion board feet. According to the Forest Economic Advisors, today they amount to 72 billion. The shortage of labor caused by Covid was added to the supply disruptions.

Wilde believes that as these disruptions are resolved and new capacity emerges, supply could rise by 5-6% this year, helping to address the inventory problem. At the same time, the rise in sawnwood prices is extremely beneficial for large logging companies such as the West Fraser Timber Company.

The Canadian company and several of its competitors, including Canfor Corp, have been buying sawmills in major forestry regions in the southern United States, where log prices have plummeted as many trees were grown there in the 1990s.

“The guys who turn logs into lumber are really thriving,” said BMO’s Wilde. “I think this is the largest market of my career, dating back to the 80s, and probably the largest for lumber producers in the last 100 years. For lumberjacks from the south, this is a golden age. ”