The dollar resumed its decline during today’s Asian session and at the beginning of the European session. At the time of this posting, DXY dollar futures against a basket of 6 major currencies were trading near 91.50, 197 points below the local 4-month highs reached in late March.

It seems that the dollar stops responding to the positive macro statistics coming from the United States, and the positive factors of budgetary stimulus and relatively high rates of vaccination in the country have already been taken into account in its quotes.

On the other hand, the accelerating inflation in the United States against the background of the Fed’s inaction, which continues to pump up the financial markets with cheap liquidity, as well as the huge, trillion-dollar stimulus programs from the US government, create preconditions for the further weakening of the dollar.

In the current situation, its weakening with a high degree of probability will continue, at least until the Fed leaders start giving signals indicating the imminent start of curtailing the stimulus policy. But so far they are not.

During the March meeting, Fed officials said they still intend to keep interest rates near zero until the end of 2023, and did not express readiness to wind down the bond purchase program.

According to Fed Chairman Jerome Powell, the economy must “move even more significantly” towards target levels of employment and inflation before the Fed begins to cut purchases (since the end of June 2020, the Fed has been buying at least $ 120 billion in Treasury and mortgage bonds every month to contain the growth of borrowing costs). Powell said last week that, well before the Fed considers raising interest rates, the central bank will first begin to reduce its monthly asset purchases. As previously promised Powell, the Fed will also warn financial market participants in advance.

The conclusion suggests itself that both the FRS and the US authorities are interested in further weakening the dollar even more, well, at least in order to reduce the debt burden from the trillion dollar US national debt.

No important macro statistics are expected to be released today. The first major US news will begin to arrive on Thursday, when the weekly labor market data for the country is released.

The euro is the main competitor of the dollar in the foreign exchange market, and the ECB’s policies and decisions are scrutinized by participants in the financial markets. It is expected that following the results of this meeting, the key interest rate of the ECB will remain at the same level of 0%. The deposit rate for commercial banks is also likely to remain at the level of -0.5%. At the same time, there is a possibility that at this meeting the ECB will announce a new program to stimulate the economy, which may cause a sharp increase in volatility not only in the euro quotes, but throughout the entire financial market.

Also read  Dollar and Euro (EURUSD) - the moment of truth

During the press conference, ECB leaders will assess the current economic situation in the Eurozone and comment on the ECB’s rate decision.

The softer tone of the statements will have a negative impact on the euro. Conversely, the tough tone of the ECB leadership’s statements regarding the monetary policy of the Central Bank will strengthen the euro.

In the meantime, the EUR / USD pair maintains positive dynamics, resuming growth at the beginning of the European session and trading at the time of publication of this article near the 1.1990 mark, through which a strong resistance level passes (local highs and the upper border of the descending channel on the daily chart).

Technical indicators OsMA and Stochastic on the 1-hour, daily and weekly charts are on the buyer’s side, signaling the preference for long positions. 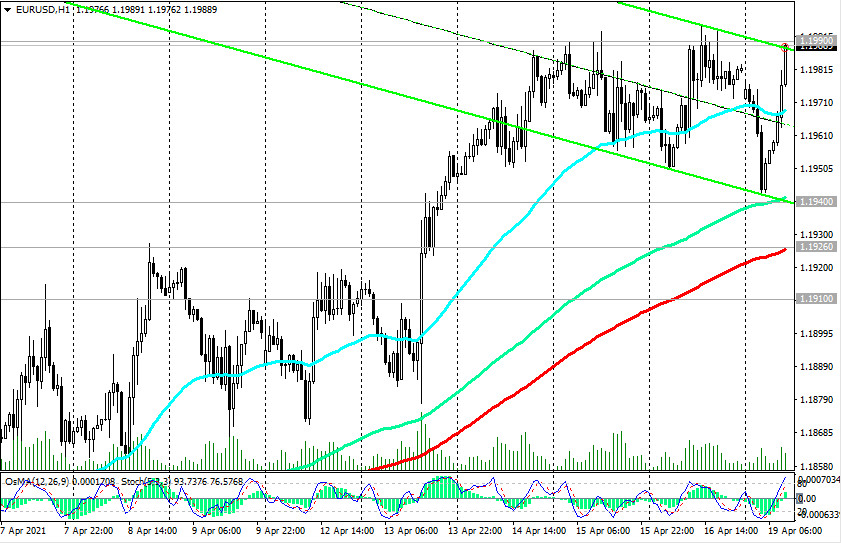 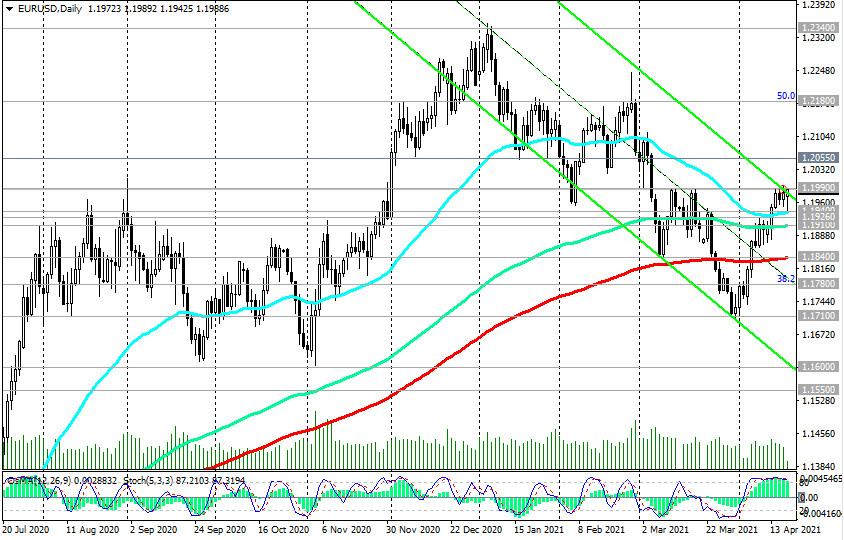 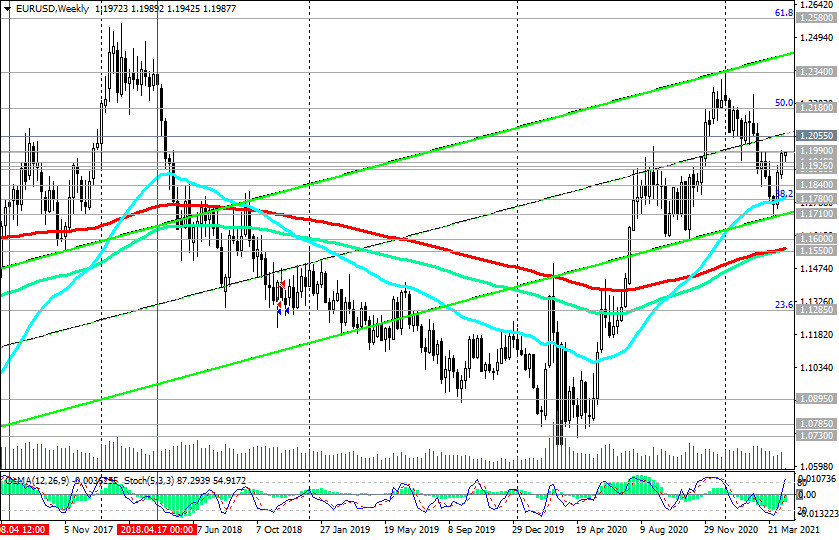 In case of a confirmed breakdown of this resistance level, EUR / USD will head towards resistance level 1.2055 (ЕМА200 on the monthly chart). More distant growth targets are located at resistance levels 1.2180 (Fibonacci level 50% upward correction in the wave of the pair’s decline from 1.3870, which began in May 2014), 1.2340 (this year’s highs). 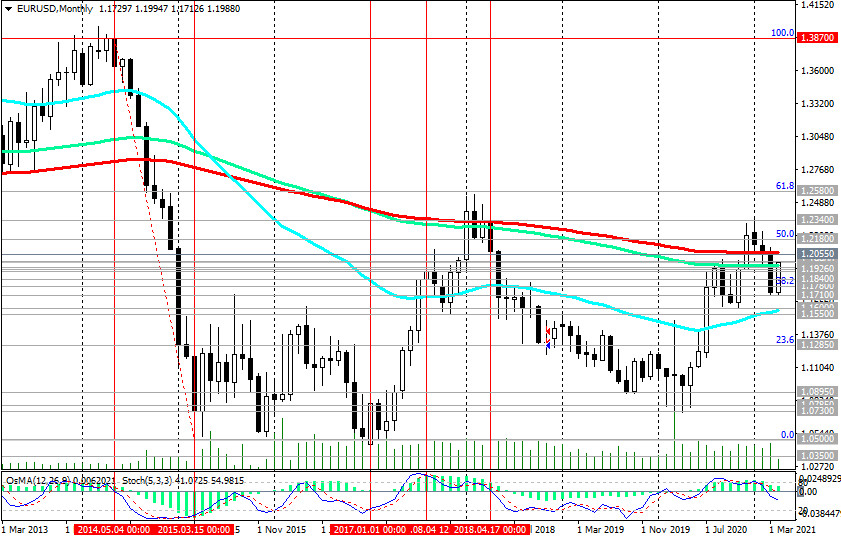 In an alternative scenario, EUR / USD will resume its decline deep into the descending channel on the daily price chart. 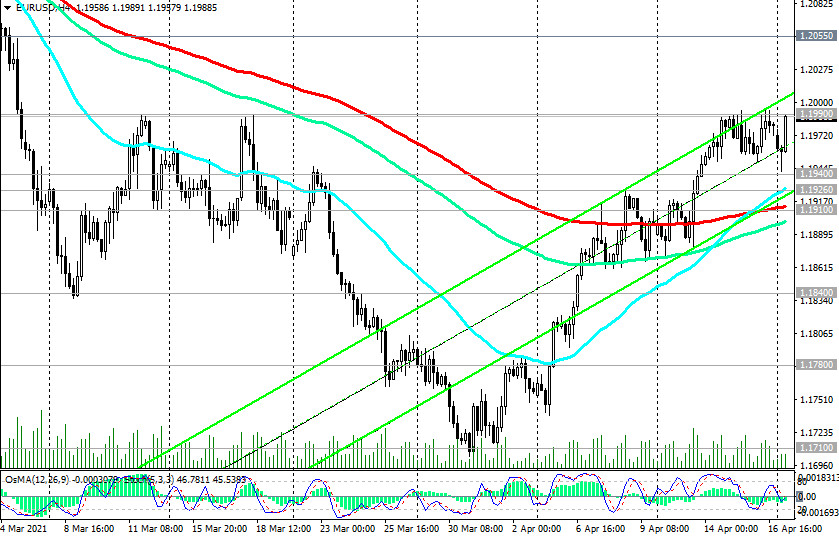