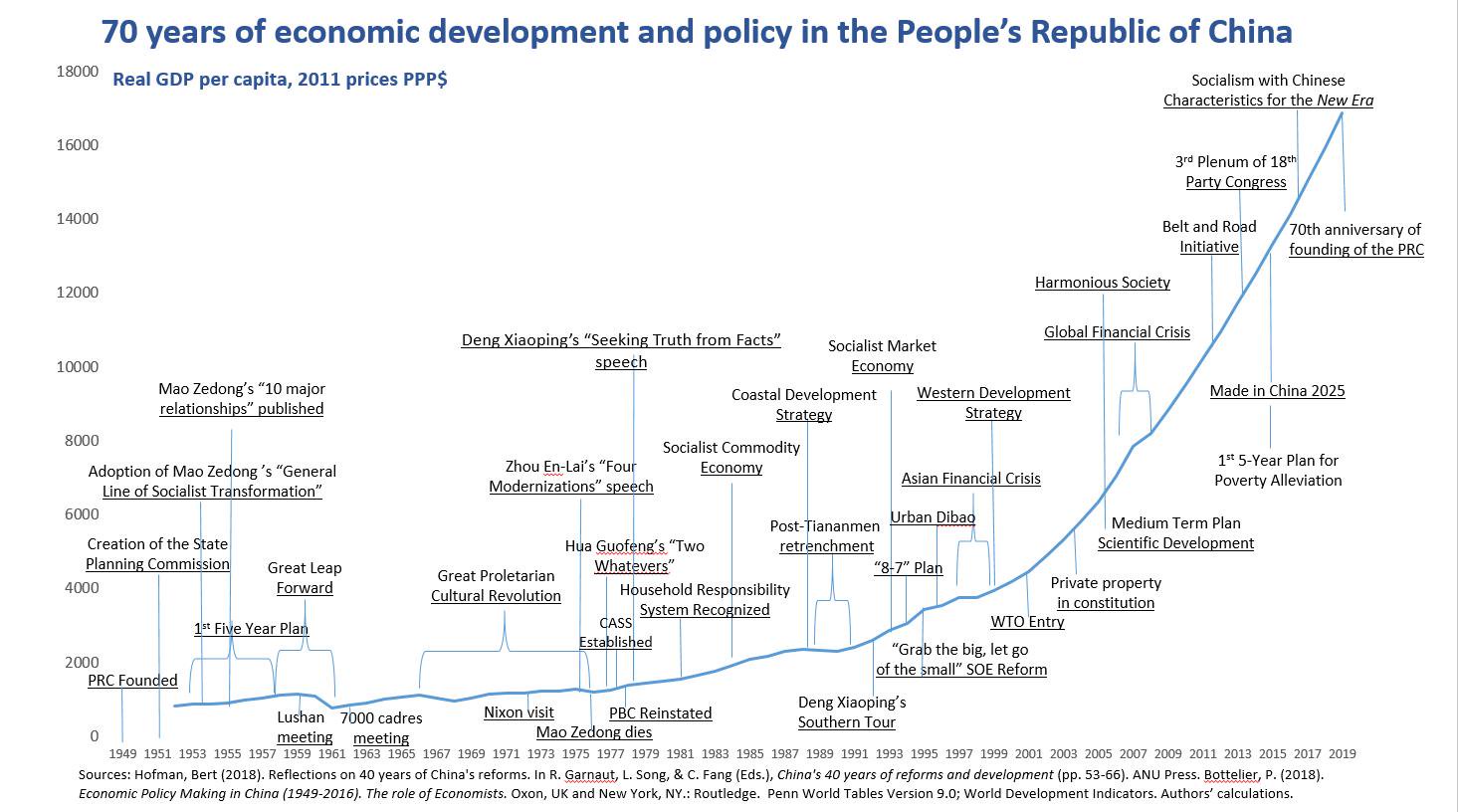 To date, China is:

And all this has been achieved in 40 years of economic reforms. Let’s take a look at the milestones in China’s recent history together.

And the wonderful graphics prepared by the Internet resource will help us with this.

In the picture below, you can see from left to right the leaders of the PRC, a chart of China’s GDP growth, changes in China’s government policy, economic events, major social and political events, as well as major dates in this historical period. 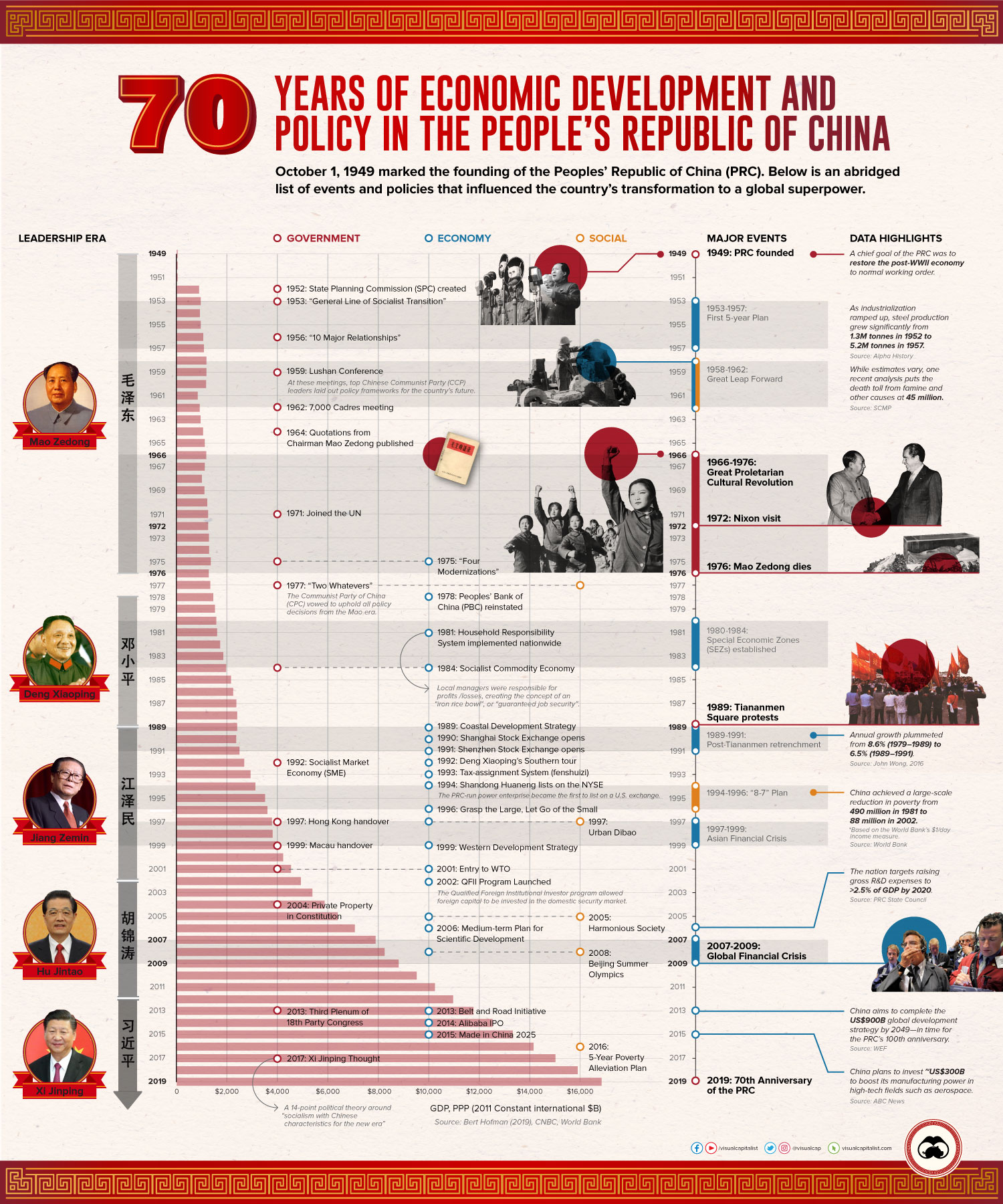 Mao Zedong’s tenure as chairman of the PRC caused radical changes in the country.

1958-1962: The Great Leap Forward
The campaign highlighted China’s agro-industrial transformation through community farming. However, the plan failed, leading to economic collapse and the death of tens of millions of people during the Great Chinese Famine.

1959-1962 Lushan conference and meeting of 7000 personnel
Top leaders of the Chinese Communist Party (CCP) met to create a detailed political framework for the future of the PRC.

1966-1976: The Great Proletarian Cultural Revolution
Mao Zedong tried to regain his power and support after the failures of the Great Leap Forward. However, it was another plan that backfired, causing millions of violent deaths and harming China’s economy again.

1971: joining the UN
The PRC replaced the ROC (Taiwan) as a permanent member of the UN. This addition also made him one of five members of the UN Security Council, including the UK, USA, France and Russia.

1972: President Nixon’s visit
After 25 years of radio silence, Richard Nixon was the first incumbent US president to join the PRC. This helped to restore diplomatic relations between the two countries.

1979: “The Politics of One Child”
The government has adopted an aggressive birth planning program to control the population of a country that it believes is growing too quickly.

In the video below, you can see the dynamics of the history of world GDP since 1800 and the forecast of its change until 2040. The forecast is based on mathematical models. Note the jump in China’s GDP growth since the beginning of the economic reform period in 1980.

Since 1980, China has worked to open up its markets to the outside world and narrow the inequality gap.1980-1984: creation of special economic zones (SEZ)
Several cities have been designated as Special Economic Zones and have been provided with measures such as tax breaks to attract foreign investment. Today, the economies of cities like Shenzhen have grown to compete with the GDP of entire countries.

1981: the National system of household responsibility is introduced
During the Mao era, quotas were set on the amount of goods that farmers could produce. In return, responsibility for profit was transferred to local managers. This quickly raised living standards and the quota system spread from agriculture to other sectors.

1989: strategy of development of the coast
The post-Mao leadership viewed the coastal region as a potential “catalyst” for the modernization of the entire country.

1989-1991: Downsizing after Tiananmen
The economic reforms of the early 1980s produced mixed results, and growing anxiety eventually led to a series of protests. After tanks stormed into Tiananmen Square in 1989, the government cut itself back, initially trying to roll back economic reforms and liberalization. Annual growth in the country fell from 8.6% between 1979 and 1989 to 6.5% between 1989 and 1991.

1990-1991: Opening of the Shanghai and Shenzhen Stock Exchanges
Together, the market caps of Shanghai (SSE) and Shenzhen (SZSE) are now more than $ 8.5 trillion.

1994: Shandong Huangeng Lists on NYSE
The power company was the first PRC enterprise to list on the NYSE. This added a new group of N-shares to the existing stock options in the Chinese market for A-shares, B-shares and H-shares.

1994-1996: National Poverty Reduction Plan “8-7”
Through this program, China has successfully lifted over 400 million people out of poverty.

1996: “Take the Big, Let the Small Go”
Efforts have been made to shrink the public sector. Politicians were called upon to retain control of large state-owned enterprises in order to “take over the big”. Meanwhile, the central government was advised to relinquish control over small businesses or “let the small ones go”.

1999: western development strategy
As part of the Open the West program, 6 provinces, 5 autonomous regions and 1 municipality were created, each of which becomes an integral part of the Chinese economy.

China’s accession to the World Trade Organization and the Qualified Foreign Institutional Investors (QFII) program, which allows foreign investors to participate in the PRC’s stock exchanges, have boosted the country’s economic growth.

2006: mid-term plan for scientific development
The 15-year plan of the State Council of the PRC states that by 2020, 2.5% or more of national GDP should be directed to research and development.

2013: Belt and Road Initiative
China’s ambitious plans to develop road, rail and sea routes in 152 countries are scheduled to be completed by 2049, the 100th anniversary of the PRC. More than $ 900 billion has been allocated for these infrastructure projects.

2015: made in China 2025
The PRC no longer wants to be a “factory” in the world. In response, it is investing nearly $ 300 billion to expand manufacturing capacity in high-tech areas such as pharmaceuticals, aerospace and robotics.

Despite the recent ongoing trade dispute with the United States and an increasingly aging population, it looks like China’s growth story is doomed to continue.

The 70th anniversary of the PRC offers a moment to reflect on the country’s path from humble beginnings to a powerful engine on the world stage.

Also read  How the Bank of England decision could affect the direction of the British pound?