In my forecast for the first half of the day, I paid attention to the level 1.1991 and recommended to act based on it. Let’s take a look at the 5 minute chart and see what happened. The chart clearly shows how the gradual buying of the euro led to a sharp breakout and the demolition of a number of stop orders of bears above the resistance of 1.1991, after which the pair flew far up on one candlestick, since there was a void above this level. The reverse test of 1.1991 did not take place, although I was counting on it that I personally was not allowed to enter the market in long positions. Sells from the level of 1.2047 are being bounced back, but, apparently, there is very little left before the breakdown of 1.2047. 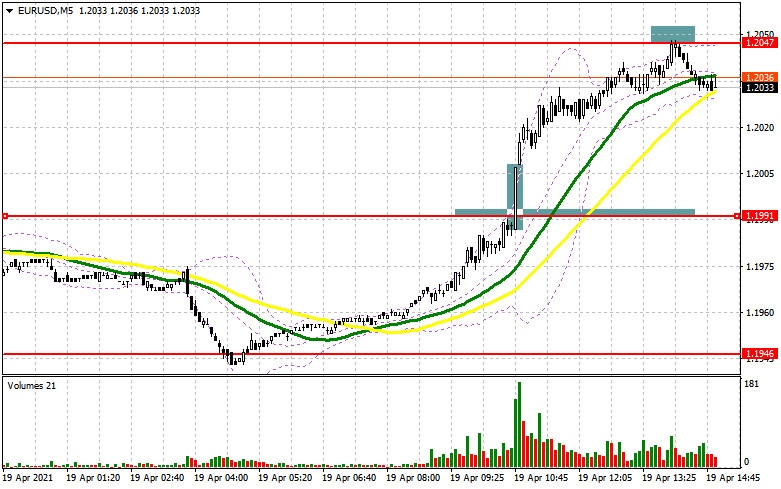 Euro buyers did an excellent job with their task for the first half of the day. and now their target is the new resistance at 1.2047. Considering that in the afternoon there are no fundamental statistics at all, it is possible that the bulls will drive the euro further up. The breakout and test of the level of 1.2047 from top to bottom forms another entry point into long positions with the prospect of entering a new high of 1.2109, where I recommend taking profits. A lot of sellers are concentrated in the area of ​​this range, which is clearly seen on the daily chart. Under the scenario of no bulls activity in the area of ​​resistance 1.2047, a downward correction of the pair is not excluded. In this case, it is possible to consider new long positions only after the 1.1991 support update, where the formation of a false breakout will lead to an excellent entry point into buying the euro. In the absence of buyers in this range, I recommend postponing long positions until the test of a larger minimum of 1.1946, from which you can buy the euro immediately on a rebound, counting on an upward correction of 15-20 points within the day.

The sellers have so far managed to stop the pair’s uptrend in the area of ​​1.2047, and now all they need is a false breakout there. Only this scenario will allow counting on a stronger downward correction to the support area at 1.1991, where I recommend taking profits. If EUR / USD continues to rise in the afternoon, which is more likely: I recommend waiting for the next high of 1.2109 to test and only from there sell the euro immediately on a rebound, counting on a downward correction of 15-20 points within the day. It is worth noting that no fundamental statistics are released during the American session, which will allow the bulls to build up their long positions in the continuation of the trend that was observed in the morning. Therefore, be very careful with your sales.

GBP / USD: plan for the American session on April 19 (analysis of morning deals). Pound sellers continue to flee the market. The pair is testing resistance 1.3914 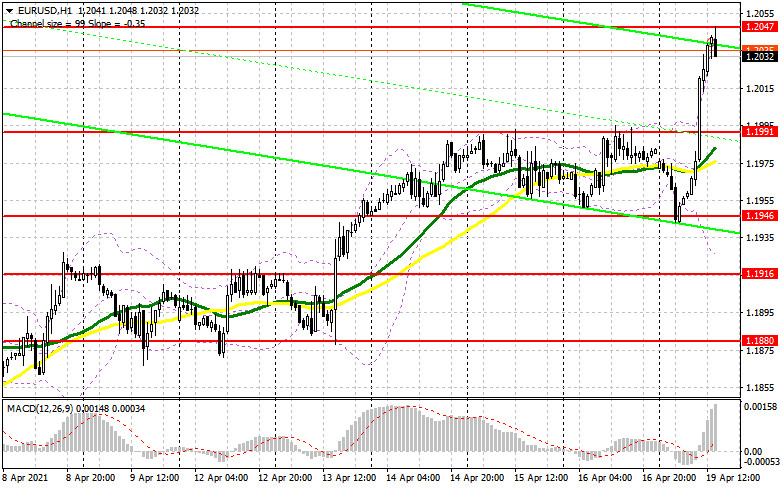 Let me remind you that in the COT report (Commitment of Traders) for April 6, the indicators of long and short positions have undergone a number of changes – short positions have grown strongly, which indicates that the market remains under the control of euro sellers. Long positions continued to decline, which led to another drop in the positive delta. Last week was filled with a number of fundamental statistics, but more attention was attracted by the meeting of the International Monetary Fund, at which a number of agreements were reached to extend the debt deferral program until the end of this year and an initiative was created to support the poor countries most affected by the coronavirus. Last week, there was also a lot of talk about the bureaucratic delay in the implementation of the EU Recovery Fund, which so far really limits the upward potential of the euro in the near future.

For this reason, in the medium term, the market remains on the side of the sellers of risky assets, which may lead to further formation of a downtrend. Investors expect the United States to be the first to start raising interest rates, which makes the dollar more attractive. This week’s inflation data may seriously affect the balance of power in the market in favor of dollar buyers. The first signs of the formation of a medium-term bullish trend will be possible only after the lifting of restrictions and the restoration of the services sector in the eurozone, which will increase hope for an improved economic outlook and return the EUR / USD to an upward trend. The COT report indicated that long non-commercial positions declined from 194,764 to 192,230, while short non-commercial positions increased from 121,024 to 124,708. As a result, the total non-commercial net position continued to decline and amounted to 67,522 versus 73,739 a week earlier. But the weekly closing price rose to 1.1816 against 1.1768 last week. 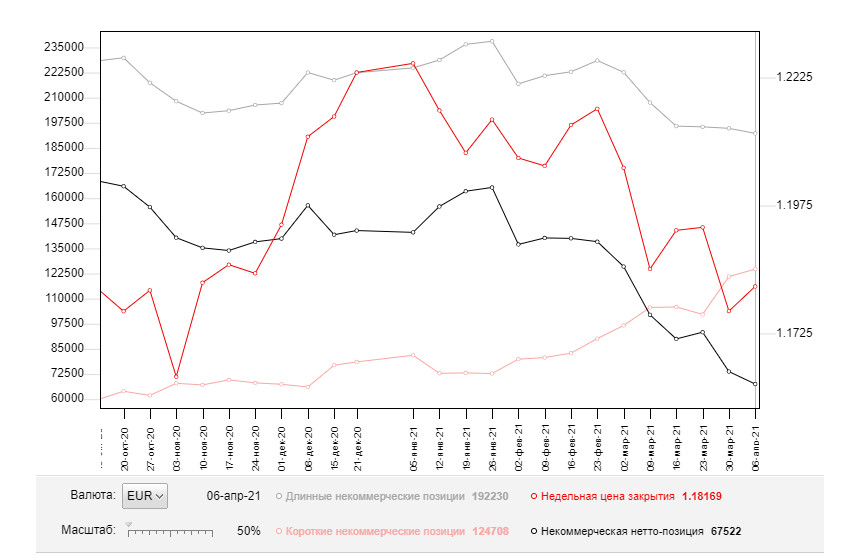 Trading is carried out above the 30 and 50 day moving averages, which indicates continued growth in the euro in the short term.

A breakout of the upper border of the indicator in the area of ​​1.2047 will lead to a new wave of euro growth. In case of a decline in the pair, support will be provided by the middle border at 1.1991.