Further rise in oil prices will require a rapid and multi-year increase in demand, which is unlikely to take place. Typically, supercycles in the raw materials market are characterized by a rapid increase in demand, which supply cannot meet, but this is not the case, given OPEC’s spare capacity for oil production at 9.5 million b / d, Bloomberg Intelligence experts write. 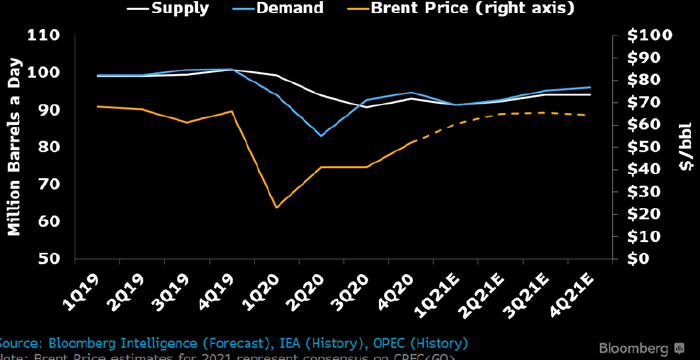 Below are some highlights of their today’s report.

The expected post-crisis growth in energy consumption and underinvestment, which was observed in 2020, give rise to forecasts of an increase in oil prices in the region of $ 100 per barrel, which is unlikely to take place.

Also read  Overview of the EUR / USD pair. The 21st of April. The euro will continue to rise in the near term. The ECB meeting promises to be a passing one.

Despite vaccinations, it looks unlikely to recover the required long-haul air travel this year. Our data show that in the first quarter, global demand for kerosene remained more than 50% below the same period last year. Prior to the coronavirus pandemic, kerosene accounted for approximately 8% of global oil demand.

Epidemiological concerns, teleworking and a difficult macroeconomic environment have led to the fact that gasoline and diesel consumption in developed countries in the first quarter remained 10-20% lower than last year.

Thus, it is hardly worth expecting a sharp increase in energy demand in the near future. But the supply situation does not inspire optimism either.

may lead to a medium-term imbalance in the market balance towards a deficit, however, great opportunities for OPEC and the United States to increase production will correct the possible imbalance.

* Saudi Aramco, BP, Shell, Exxon, Chevron, Total, Eni and Equinor, among others, reduced capital expenditures by about 20% compared to 2019

Do not forget about Iran, which, in the event of a new nuclear deal with Washington, could quickly increase oil production by almost 1.5 million bbl / d.

Also read  Fears about the breakup of the UK and accusations against Johnson are limiting the growth of the GBP. And yet the pound is getting more expensive

Saudi Arabia’s January decision to voluntarily cut oil production by 1 million bbl / d helped to avoid oversupply, leaving the oil market in a more or less stable balance in the first quarter, according to Bloomberg. In the second quarter, the decline in world oil reserves may accelerate, but this will be offset by increased supply.

The strong one-year backwardation in Brent oil futures suggests that producers are actively hedging future production, and historically this has led to lower prices in the medium term.

The median forecast of experts interviewed by Bloomberg for the average Brent price in the second quarter is $ 65 per barrel, and for the entire 2021 – $ 64 per barrel.