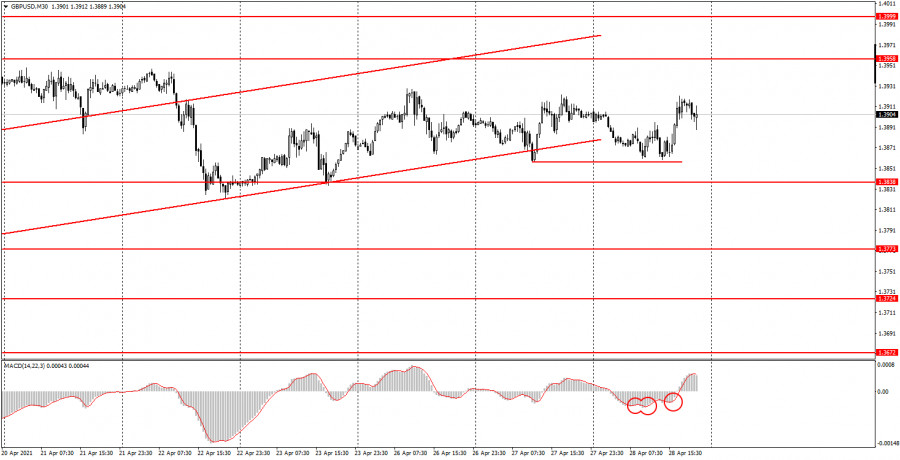 The GBP / USD pair on the 30-minute timeframe continued to trade very indistinctly on April 28, in different directions, without a definite direction and with low volatility. Thus, trading during the day was still not very comfortable. On the current timeframe, the pair’s quotes left the ascending channel, however, a new downward movement did not start. This point is very important and novice traders should understand it. The quotes left the ascending channel not because the downward movement began, but because the upward movement ended and the sideways movement began, that is, flat. He was observed in the last three days. The price did not even manage to update the last local minimum today. Therefore, it is incorrect to speak about the beginning of a downward trend now. Hence the conclusion: one should have continued to consider buy signals from the MACD indicator. Three of them were formed during the day. And all three formed well below zero, so all three had to be skipped. Thus, no positions should have been opened on this timeframe during the day. Also during the day there was not a single important macroeconomic report or other event. Only 20 minutes ago the announcement of the results of the FRS meeting began and, as we see, the reaction to this event is very weak so far. Perhaps she will get stronger later when Jerome Powell’s press conference begins. 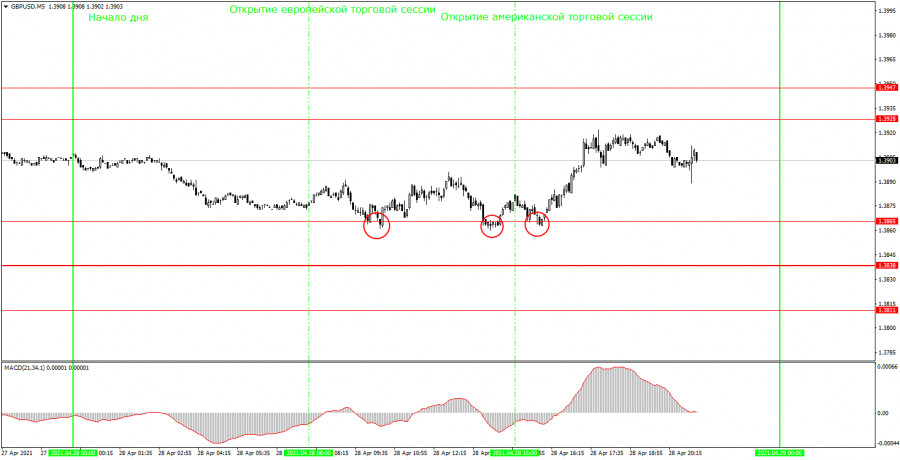 On the 5-minute timeframe, three trading signals were formed during the day, and all of them are surprisingly accurate and recommended for working out. All three signals are to buy, and all three are a rebound from the 1.3865 level. If in the first case the price went up by only 20 points, which was enough to set Stop Loss at breakeven, at which the deal was closed, then the second time the upward movement was even weaker. But at the same time, Stop Loss was not placed, and the price did not fix below the level of 1.3865, so the buy deal remained open when the third rebound from the level of 1.3865 was formed, after which the upward movement began. In total, the pound / dollar pair went up about 48 points, which was enough for Take Profit to work. Thus, novice traders could earn at least 40 pips. Moreover, it was possible to get out of this deal a few hours before the start of summing up the results of the Fed meeting, which is just fine, since novice traders did not have to risk in vain. At this point, all trades should be closed.

Also read  Second half of June - is the change in trend postponed? US Dollar Index vs EUR / USD & GBP / USD & USD / JPY. Complex

How to trade on Thursday:

On Thursday, we recommend trading again according to the upward trend on the 30-minute timeframe. Despite the fact that the pair has left the ascending channel, the upward trend continues. Thus, tomorrow you will need to wait for the formation of new buy signals in the form of upward reversals of the MACD indicator. The indicator climbed far up today, so you need to wait for a downward correction. You also need to be clear about how the markets will react to Jerome Powell’s press conference. In general, tomorrow morning you will need to look at the picture with a new look. In America, on April 29, the publication of a report on GDP for the first quarter is planned, which may provoke serious movements, especially if its actual value differs greatly from the forecast. On the 5 minute timeframe, the important levels are 1.3838, 1.3865, 1.3928 and 1.3947. The price can bounce off them or overcome them. As before, Take Profit is set at a distance of 40-50 points on a 30-minute timeframe, on a 5-minute timeframe, the target is the closest level (if it is located more than 20 points). If the nearest level is too far away, then it is recommended to maintain the deal in manual mode, tracking changes in the market. When passing 20 points in the right direction, we recommend setting Stop Loss to breakeven.

MACD indicator is a histogram and a signal line, the crossing of which is a signal to enter the market. Recommended for use in combination with trend plots (channels, trend lines).

Beginners in the Forex market should remember that every trade cannot be profitable. The development of a clear strategy and money management is the key to success in trading over a long period of time.