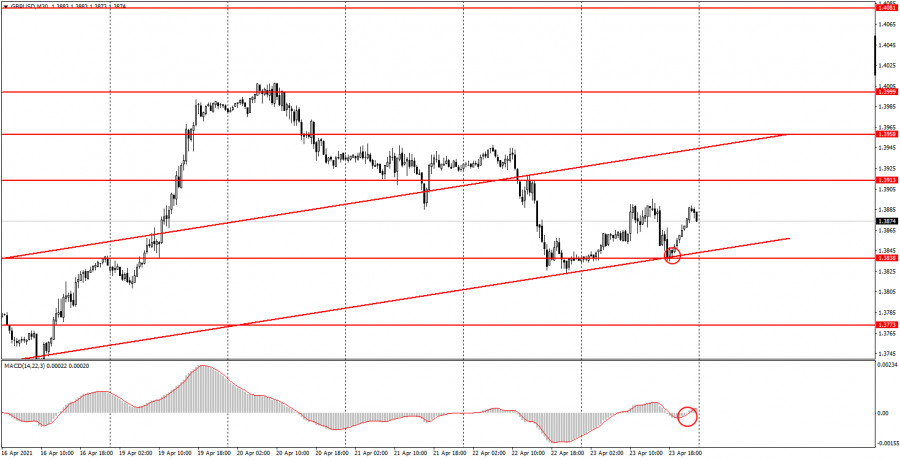 The GBP / USD pair traded on a 30-minute timeframe quite understandably, but, unfortunately, only on this timeframe. The uptrend is still preserved, as the upward channel remains relevant. And, as we can see, the price bounced twice from its lower border on Thursday and Friday. If the signal on Thursday formed closer to the night and should not have been processed, then the Friday signal was formed during the day and it was possible to work with it. The rebound was very accurate, and after the formation of a buy signal, the price went up exactly 40 points, which would have been enough for the Take Profit to trigger. In any case, any open positions should have been closed before the market closed on Friday and the profit on the trade would have been only slightly smaller anyway. But I managed to make money on this signal – and this is very good. The second signal was formed by the MACD indicator, turning up (circled). However, at the time of its formation, a buy deal had already been opened, so, of course, it should not be duplicated. As for macroeconomic statistics and fundamental background, in addition to the ignored PMIs and Janet Yellen’s speech in the UK, PMIs in services and manufacturing were also published, as well as a report on retail trade. Considering the fact that all four reports were positive and exceeded their forecasted values, the pound sterling showed a very modest growth after their release, no more than 35 points, so there are doubts that the markets generally reacted to them.

Also read  Review of the GBP / USD pair. April 29. The conflict between the UK and the EU may intensify in the near future. 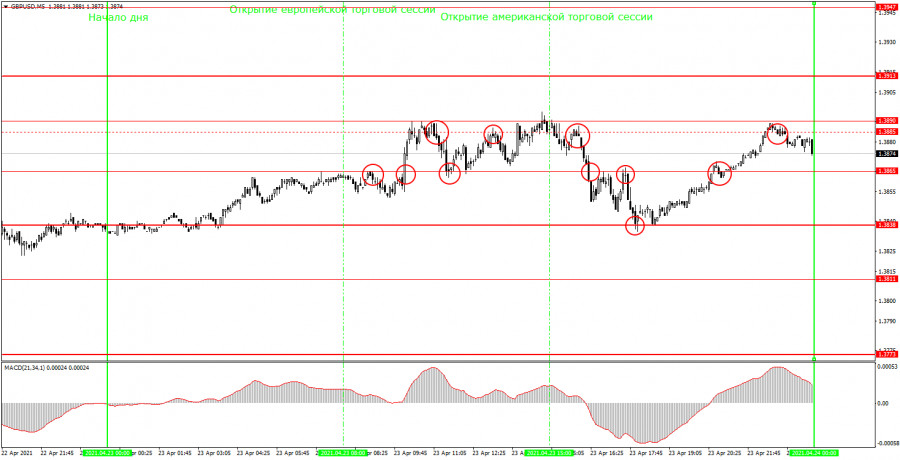 Also read  Plan for the American session on April 29 (analysis of morning deals). The bulls failed to break above the high of 1.3970,

On Thursday, we recommend trading again according to the upward trend on the 30-minute timeframe. Thus, tomorrow it will be necessary to wait for the formation of new buy signals in the form of upward reversals of the MACD indicator or bounces from the lower border of the channel. This indicator is now near the zero level and can form potentially strong signals. In America, only the durable goods orders report is scheduled for April 26, while in the UK the news calendar is empty. On the 5 minute timeframe, the important levels are 1.3838, 1.3865, 1.3890, 1.3913 and 1.3947. The price can bounce off them or overcome them. As before, Take Profit is set at a distance of 40-50 points on a 30-minute timeframe, on a 5-minute timeframe, the target is the closest level (if it is located more than 20 points). If the nearest level is too far away, then it is recommended to maintain the deal in manual mode, tracking changes in the market. When passing 20 points in the right direction, we recommend setting Stop Loss to breakeven.