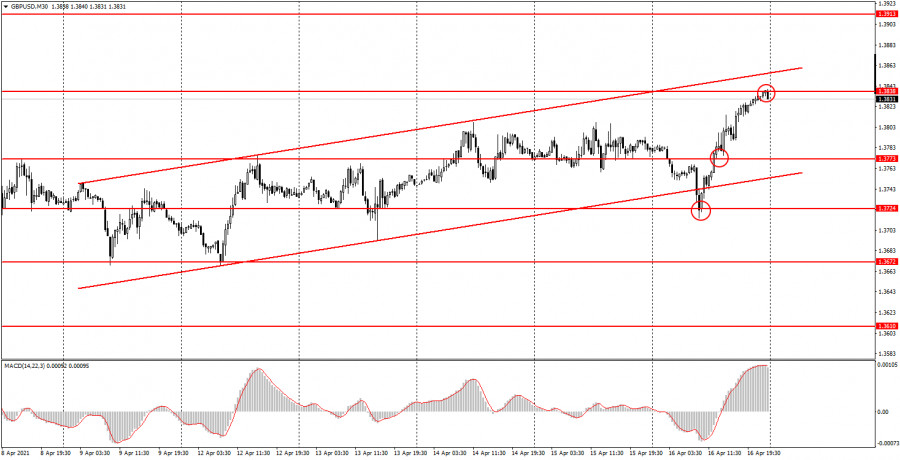 The GBP / USD pair on the 30-minute timeframe was trading on Friday, firstly, quite actively, and secondly, quite clearly. Quite unexpectedly, on Friday several very accurate signals were generated that did not even require a specific interpretation, they were unambiguous. But at the same time, several situations arose that require detailed analysis. So, let’s begin. The first signal of the day was formed at night: the price consolidated below the level of 1.3773. This signal had to be passed. Further, the quotes of the pair dropped to the next extreme level of 1.3724 and bounced off it, forming a buy signal. It should be noted that literally an hour earlier the pair managed to leave the ascending channel, thus, by that time the trend had changed to a downtrend. However, we trade in both directions from all extremum levels, so here it was necessary to open buy deals. Within a few hours the price rose to the level of 1.3773 and fixed higher on the same bar. Thus, long positions could not even be closed, but continued to hold them with the target of 1.3838 or until the Take Profit triggered, which we usually recommend placing at a distance of 40-50 pounds per pound. However, in the end, the target level was worked out, which could bring a maximum of 98 points to novice traders. The minimum is 40-50, depending on who placed Take Profit how much. Formally, another sell signal was even formed, as there was again a clear rebound from the level of 1.3838. However, this signal was formed almost at the close of the market on Friday. 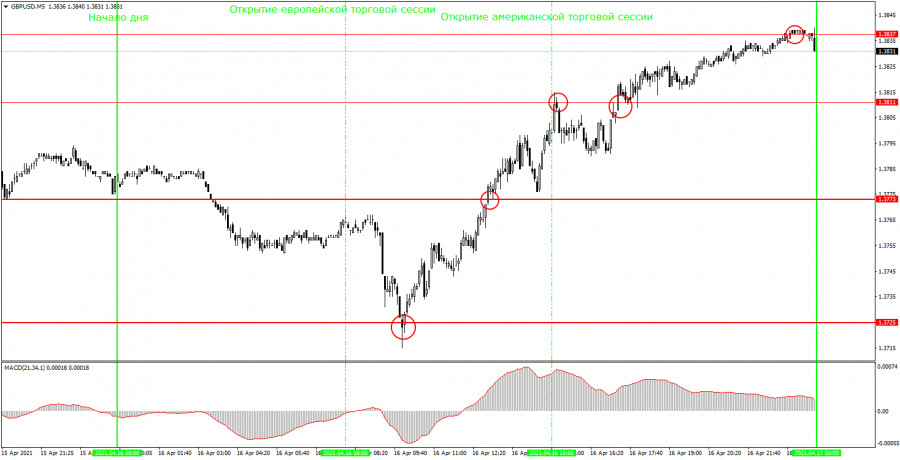 Five trading signals were formed on the 5-minute timeframe during the day, but they almost all coincided with similar signals on the 30-minute timeframe. However, there were also a few differences. For example, the third signal is a rebound from the level of 1.3811 – there is no such level on the 30-minute timeframe, so here novice traders could open short positions. The signal turned out to be false and closed at a loss of 17 points. But the fourth signal – to buy to overcome the level of 1.3811, turned out to be correct and would bring newcomers 20 points of profit. Signals that were identical to the signals from the 30-minute timeframe, we did not analyze here again. Thus, in any case, the day for the pound / dollar pair ended with a profit. No important publications were published on this day in either the US or the UK. Fundamental background was also practically absent on Friday.

On Monday, we recommend trading again in accordance with the existing uptrend on the 30-minute timeframe, which continues to be supported by the ascending channel. Thus, tomorrow it will be necessary to wait for the formation of new buy signals in the form of upward reversals of the MACD indicator. The MACD indicator will first need to be discharged to the zero level, as it is now very high. In Britain and America, no important and interesting events are scheduled for April 19, so volatility may decrease and nothing will prevent novice traders from trading on technical signals. The most interesting thing is that even before the opening of trading on Monday, a sell signal has already been formed – a rebound from 1.3838. But for obvious reasons, we do not recommend working it out. On the 5 minute timeframe, the important levels are 1.3811, 1.3837, 1.3865 and 1.3913. The price can bounce off them or overcome them. As before, Take Profit is set at a distance of 40-50 points on a 30-minute timeframe, on a 5-minute timeframe, the target is the nearest level. If the nearest level is too far away, then it is recommended to maintain the deal in manual mode, tracking changes in the market. When passing 20 points in the right direction, we recommend setting Stop Loss to breakeven.