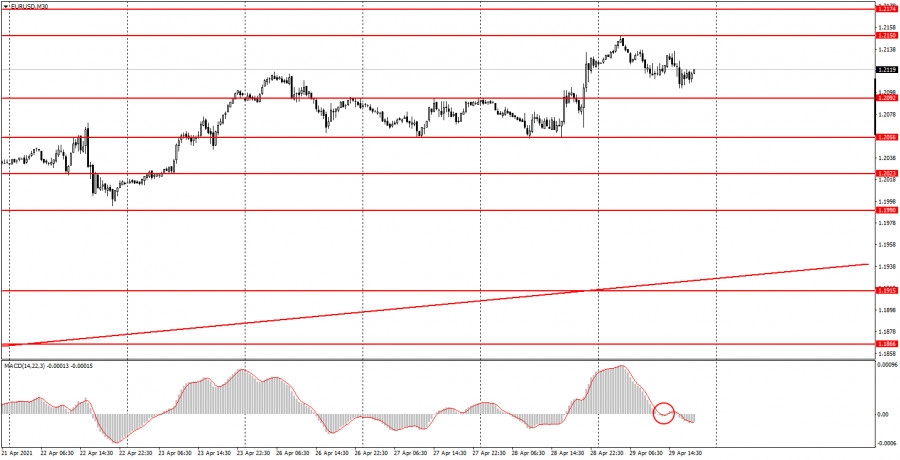 The EUR / USD currency pair on Thursday began to correct against the upward movement on Wednesday. Let’s remind that yesterday evening the results of the two-day meeting of the FRS were summed up, which did not like the market participants, as a result of which the sale of the American currency began. Sales ended today, which allowed the pair to decline slightly. However, today traders have already ignored the US GDP report for the first quarter of 2021, which, in our subjective opinion, turned out to be quite strong. However, the US dollar did not start appreciating after this report, and the volatility during the day was 47 points. In general, the pair continues to trade very inconveniently, especially for novice traders. Moreover, an extremely small number of signals are generated, and most of the generated ones are false. Today, during the day, only one buy signal was generated from the MACD indicator. False. It led to losses of about 10 points, since literally an hour later the indicator had already turned down. It’s good that everything turned out to be only one false signal. In general, the upward trend continues, but with this movement of the pair, filtering out the sell signals does not help much. 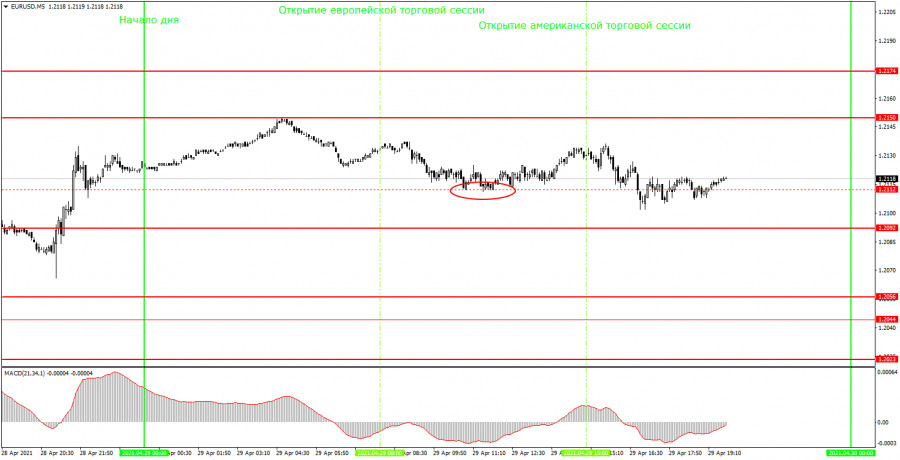 Now let’s take a look at the 5 minute timeframe. Here the picture is even more eloquent. During the entire European trading session, the pair moved 25 pips from high to low. The price still managed to work out the level of 1.2112, which later lost its relevance, forming a buy signal around it – a rebound. However, as it is easy to guess, with such volatility, the pair with grief went up 15 points in half, which was enough to set Stop Loss to zero. Therefore, the Stop Loss deal was closed at breakeven. At the American trading session, traders made an attempt to “revive the pair”, but gave up very quickly. To be honest, after the “mega-active movements” at the European trading session, we would not have entered the market at all. By the way, the signal that we wrote about in the first part of the article was duplicated by a signal on a 5-minute timeframe. Here it formed a few hours earlier, so losses could have been avoided. Well, at the American session, it was generally not necessary to open positions after what we observed during Europe.

How to trade on Friday:

On Friday, we recommend trading on the 30-minute timeframe, still buying, as the upward trend continues. However, at this time, the pair is moving mega inconveniently, so you should probably wait a couple of days and not enter the market. Nobody knows when this awkward movement will end. Formally, each signal to buy the MACD indicator can be worked out, but novice traders themselves must decide whether the increased risks that they currently have are suitable for them. Novice traders can trade tomorrow also from the levels 1.2056, 1.2092 and 1.2150 for a rebound or overcoming in both directions. Take Profit, as before, is set at a distance of 30-40 points. Stop Loss – to breakeven when the price passes in the right direction by 15-20 points. On the 5-minute timeframe, the levels are the same, since we removed the weakest ones. We remind you that you should only use the most accurate and clear signals. On April 30, the European Union will publish the consumer price index for April, as well as the level of GDP and the unemployment rate. A package of very important statistics that can trigger a reaction in the market. During the release of this data, you should be especially careful with any positions. There are several minor reports in America tomorrow, which are unlikely to cause a reaction from traders.

Also read  Review of the GBP / USD pair. 26 April. The future of Great Britain remains as hazy as the weather itself in the Kingdom.