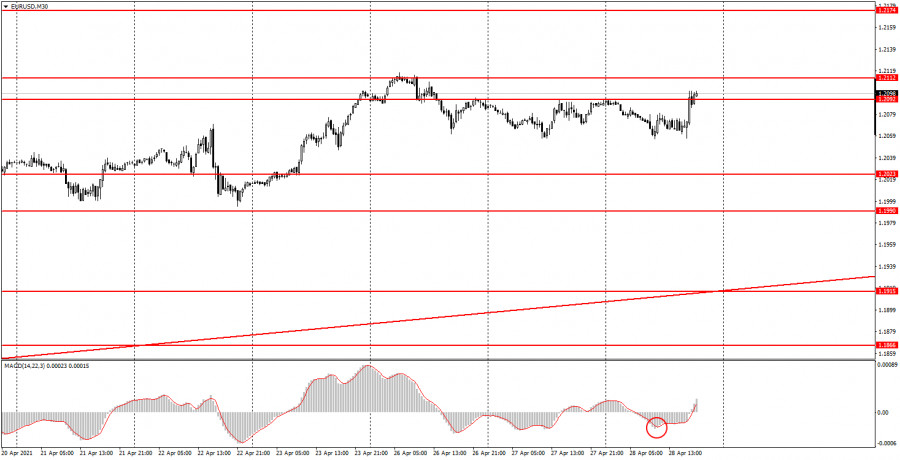 The EUR / USD currency pair on Tuesday tried to resume the upward movement, but this happened almost in the evening, about 3-4 hours before the publication of the results of the Fed meeting and the press conference with Jerome Powell. Also around this time, when the pair made a spurt up 40 points, the head of the ECB Christine Lagarde made a speech. Thus, two fundamental events at once could provoke this movement. It was therefore not recommended to open any positions at this time. However, it cannot be said that the movement itself was strong and deserved to be worked off. As we have already said, it was only 40 points, but at the same time it still stands out against the background of the movements of the last two days, which were even weaker. On the 30-minute timeframe, the uptrend is still maintained, and during today only one buy signal from the MACD indicator was formed. Unfortunately (or fortunately), it was formed well below the zero level, so it should not have been worked out. Thus, no signals were generated on the current timeframe. 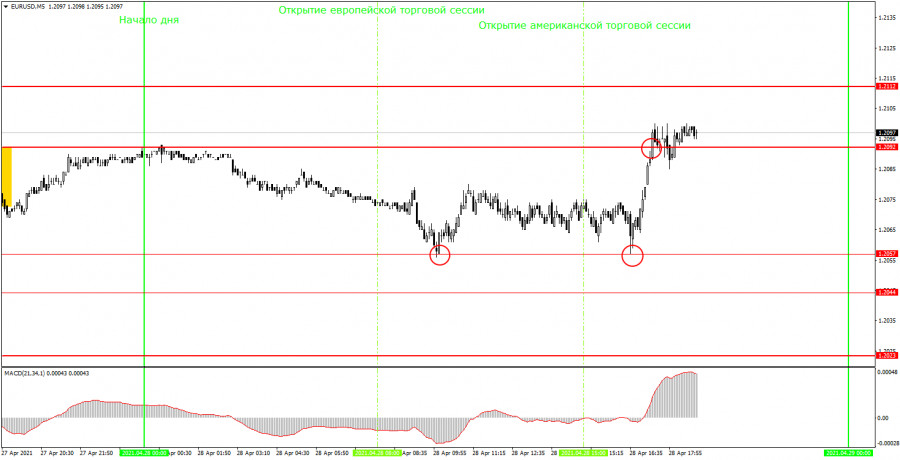 Now let’s take a look at the 5 minute timeframe. The situation here is surprisingly much better than in the past few days. Let us remind you that on Monday and Tuesday many false signals were generated and novice traders could hardly manage to balance on the verge of receiving losses. But today three signals were generated at once, two of which had to be worked out and both turned out to be quite strong and, at least, accurate. Unfortunately, the weakest volatility did not allow you to earn much, but in the current environment, any profit is good.

Also read  How to trade the EUR / USD currency pair on May 24?

Both signals formed around the level of 1.2057, and bounces from this level were ideal in terms of accuracy, as novice traders can see for themselves by looking at the illustration. After the formation of the first signal, the price went up about 15 points, which was enough to set Stop Loss at breakeven, and it was on this order that the deal was closed. The next signal allowed the pair to go up 35 points and work out the nearest level of 1.2092, which brought 25 to 30 points of profit for novice players. The next signal, which formed near the level of 1.2092, firstly, was not accurate, and, secondly, it was formed immediately after Christine Lagarde’s speech, it should not have been worked out. The second buy signal could have been missed, but it was too accurate. All subsequent signals could be safely ignored, as there is too little time left before the publication of the results of the Fed meeting.

How to trade on Thursday:

On Thursday, we recommend trading on the 30-minute timeframe, still buying, as the upward trend continues. However, much will depend on how the day ends and what the market’s reaction to the Fed meeting will be. It is also unknown where the day will end for the MACD indicator. In general, in any case, you need to wait for tomorrow morning and look at the technical picture. Novice traders can trade tomorrow from levels 1.2023, 1.2092 and 1.2112 for a bounce or break in both directions. Take Profit, as before, is set at a distance of 30-40 points. Stop Loss – to breakeven when the price passes in the right direction by 15-20 points. There are more levels on a 5-minute timeframe, each of them can also be used to receive signals. We remind you that you should use only the most accurate and clear signals. No important publications are scheduled for April 29 in the European Union, and the US will publish a report on GDP for the first quarter, which is of great importance both for the American economy and for traders.

MACD indicator (14,22,3) – a histogram and a signal line, the crossing of which are signals to enter the market. Recommended for use in combination with trend plots (channels, trend lines).

Beginners in Forex should remember that every trade cannot be profitable. The development of a clear strategy and money management is the key to success in trading over a long period of time.