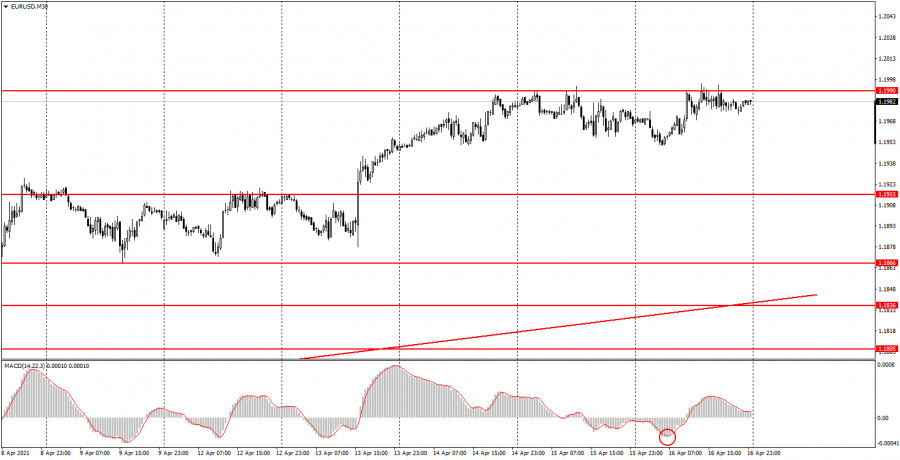 The EUR / USD currency pair on Friday, after a minimum correction, tried to resume the upward movement, but again rested at the level of 1.1990, which it failed to overcome for the third time in two days. The psychological level 1.2000 is also located near the 1.1990 level, which provides additional resistance to the price. Thus, the upward trend continues, but the EUR / USD pair has not yet been able to continue moving up. We should also draw the attention of novice traders to the minimum volatility in the last two trading days. This indicator did not exceed 40 points on Thursday and Friday, which is very small even for the euro currency. Thus, these days, in principle, it was very inconvenient to trade. During the last trading day of the current week, only one buy signal from MACD was formed on the 30-minute timeframe. However, novice traders had to filter it out, since, firstly, it formed before the opening of the European trading session, that is, formally at night, and secondly, the MACD indicator turned up much below the zero level. Formally, of course, this signal could also be worked out, since there would be no tough violations of trading rules. The signal turned out to be correct and would have allowed to earn about 28 pips. But in such situations, traders must make their own decisions whether to open a deal. 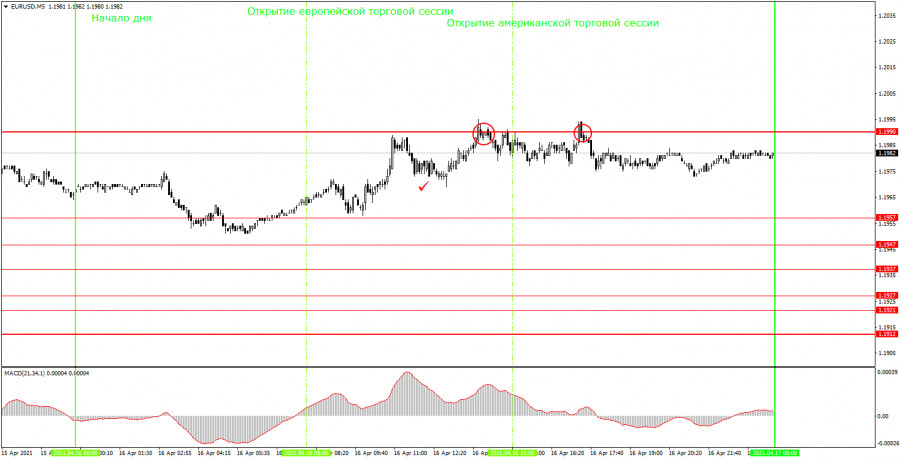 Now let’s take a look at the 5 minute timeframe. Here, during the day, two signals were formed and both are for sale. A whole scattering of extreme levels at the bottom did not help too much in trading on Friday. As a reminder to novice traders, these levels are the lows and highs of the previous days. In theory, the price can bounce off them or overcome them, forming signals. On Friday night, the price broke the closest level of 1.1957, but the signal was formed at night, so it shouldn’t have been worked out. And the level itself turned out to be weak, the downward movement did not continue, so in the future you can ignore it. As for the two sell signals, both were formed during bounces from the level of 1.1990. Here, novice traders can understand what a “clear signal” is. Almost a dotted touch to the level of 1.1990 and immediately a pullback downward. Unfortunately, weak volatility did not allow making money on these signals. Both times the price went down no more than 15-16 points, and the deal had to be closed manually at the end of the day, which would have brought just 15 points of profit. The illustration also shows the place when the report on inflation in the EU was published, to which, however, there was no reaction.

On Monday, we recommend trading on the 30-minute timeframe, still buying, as the upward trend continues at the moment. The uptrend line continues to support bull traders. However, if the MACD indicator generates buy signals much below the zero level, then we recommend filtering them out (or opening a deal at your own risk). In general, the current situation is not very favorable for trading, as volatility remains low. Also, novice traders can trade from the levels of 1.1990 and 1.1915 for a rebound or overcoming in both directions. Take Profit, as before, is set at a distance of 30-40 points. Stop Loss – to breakeven when the price passes in the right direction by 15-20 points. On the 5-minute timeframe, the situation is also not very favorable. By and large, there are only two levels close to the price – 1.1947 and 1.1990. Therefore, you can use them in trading on Monday. No major publications are scheduled for April 19, either in the US or in the EU.

Also read  Plan for the American session on April 27 (analysis of morning deals). Euro is pushed in the channel with no particular direction

MACD indicator (14,22,3) – a histogram and a signal line, the crossing of which are signals to enter the market. It is recommended to use in combination with trend plots (channels, trend lines).