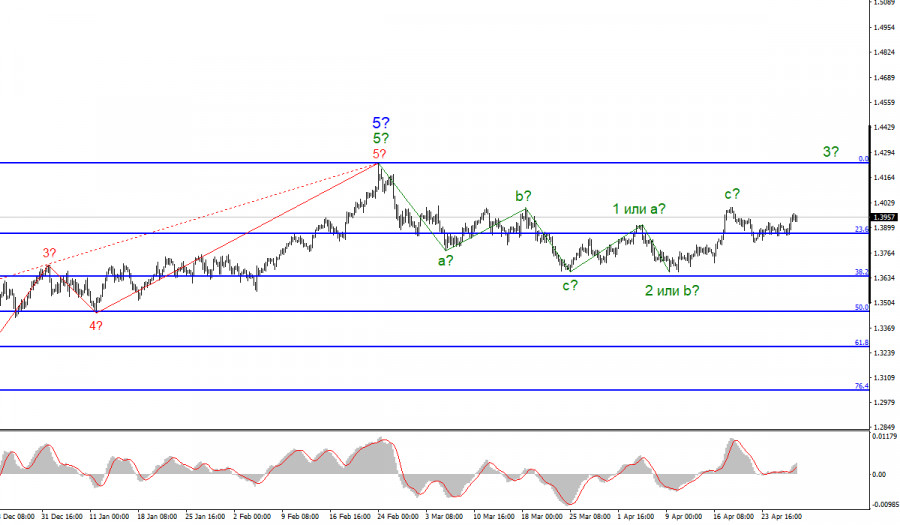 For the Pound / Dollar instrument, such movements continue, which are very difficult to attribute to any specific wave structure. During yesterday evening, the demand for the American currency decreased, which allowed the instrument to slightly increase, but this increase just does not fit into the current wave counting, although it does not violate or cancel it. I am still awaiting the construction of a new three downward waves and assume that the current wave counting is in reality exactly as I presented it in the upper picture. However, other options are also possible. For example, the lows of the waves from and 2 or b match item to item. So the wave 2 or b can also be a wave e… In this case, the trend section that began on February 23 took the form a—b—c—d—e, and after its completion, we saw only the first and second waves of the new uptrend section. Thus, in case of a successful attempt to break through the high of the assumed wave c, the current wave pattern will require making additions and adjustments.

Also read  The rise in interest rates is just around the corner !!!

The news background for the Pound / Dollar instrument was the same yesterday as for the Euro / Dollar instrument. The same Fed meeting, which caused a new decline in demand for the American currency. However, there were other events as well. US President Joe Biden addressed Congress for the first time in 100 days in office. He presented for consideration a new $ 1.8 trillion plan to help the American economy. The plan includes spending $ 1 trillion on education and childcare, as well as $ 800 billion on tax breaks for low-income families, early childhood education and college tuition. Joe Biden offers to finance this aid package at the expense of wealthy Americans for whom taxes will be raised, as well as at the expense of large corporations. It should be noted that this completely social plan is different from the one that Biden presented earlier. Earlier there was talk of a $ 2.6 trillion aid package, which, in addition to the expenditure items listed in the “social plan”, also includes investments in infrastructure and technology. So it looks like there are already two different aid plans and it looks like both will be funded by wealthy Americans and companies. It should also be noted that the Republican Party does not yet support the initiatives of Joe Biden and the Democrats, as it considers tax increases to be ineffective. The US president insists that both packages are needed to effectively compete with China, which his administration sees as a major strategic competitor.

The downtrend section, which began its construction a couple of months ago, is taking on a rather ambiguous form. As I said above, several wave counting options are possible at once. Unfortunately, different options offer different further developments. Therefore, it may be necessary to wait for some time for the current wave counting to clear up a little.

Also read  Currency rates of the Central Bank of the Russian Federation: the ruble against the dollar, euro, hryvnia, lira, tenge, yuan