In this article, we continue to explore the methodology of trading from supply / demand zones by Sam Seiden and his followers. 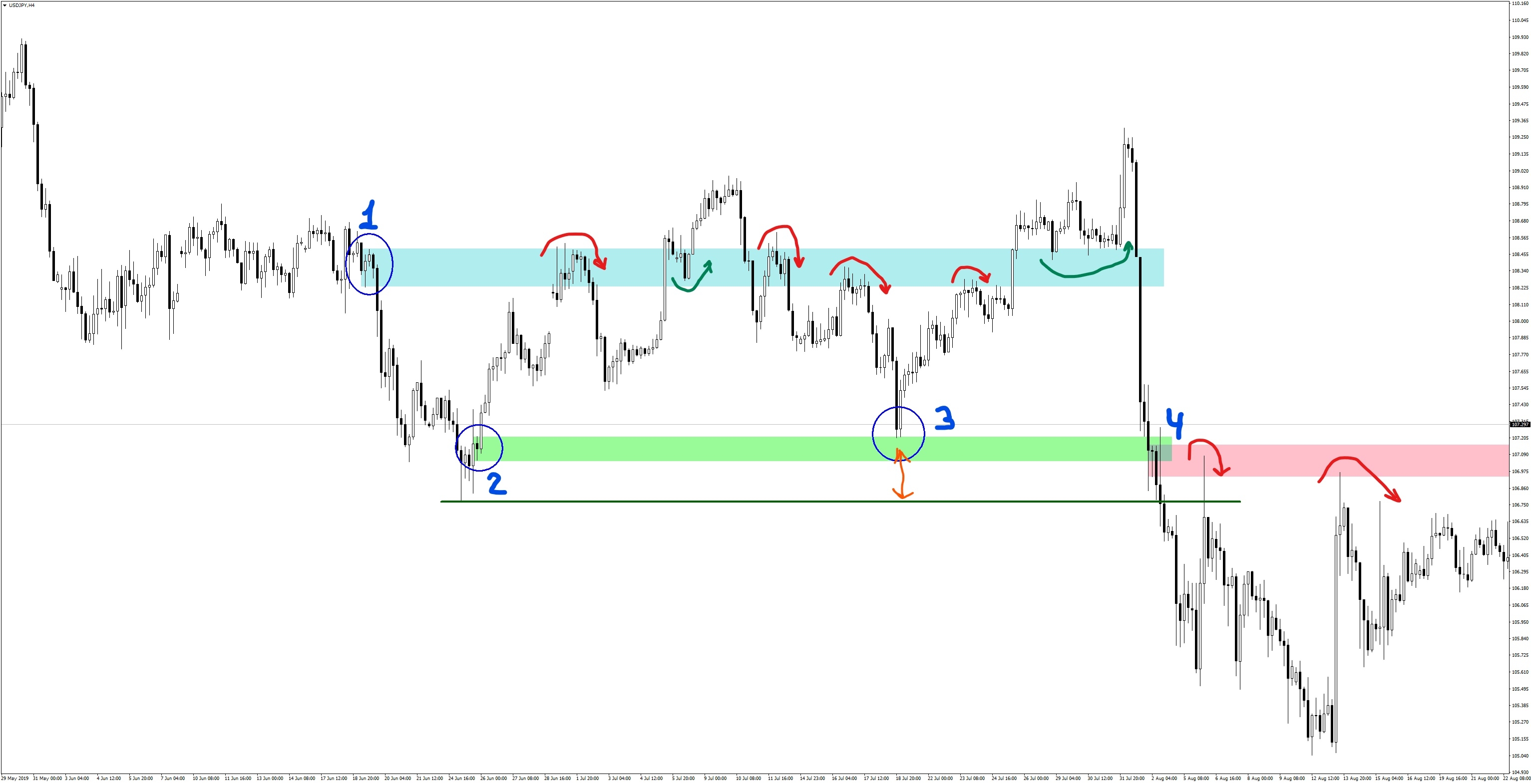 The strategy of trading in supply / demand zones is quite simple and methodologically fundamentally does not differ much from trading at support / resistance levels.

The most difficult point in all of Sam Seiden’s methodology is the correct identification of the supply and demand zones themselves. There are no clear rules and this greatly complicates their finding. In addition, there are no volumes and an order book on the Forex market, and we cannot use them as an additional analysis criterion. Therefore, when determining the areas of interest of large players in the foreign exchange market, you will have to rely only on charts and their analysis.

On the 4-hour chart of the USDJPY currency pair, the supply zones (blue and pink) and the demand zone (green) are highlighted at the top.

This concept has many followers and critics alike. On the Internet, you can find the following reviews “Pending orders cannot change the price of the exchange rate, the fact that supply and demand trading is based mainly on this assumption means that either Sam Seiden does not know too much about Forex trading, or he deliberately misrepresents the information to get people to buy his trading rates. ”

We know very well that there is no “golden grail” in Forex. The market is highly unpredictable and individual traders lack a lot of information about the market. And the concept of supply / demand zones is no exception. Its use cannot give 100% profitable trades. And here it is important to be able to distinguish the essential provisions of a theory from its shortcomings. Of course, the example about a batch of pending orders at levels in the previous article is just a figurative example. And it is unlikely that in these zones the orders of large players are standing and waiting for the price to return to this zone and execute them. Modern trading is much faster, more dynamic and robotic.

And the key concept from Seiden’s theory, in my opinion, is the DISBALANCE of supply and demand arising in these zones. And the reasons for its appearance can be very different. These are market orders and pending orders and profit taking or closing of opposite positions by traders. But against the background of all the disagreements in the theory of supply and demand zones, we see with stubborn constancy how the price returns to these zones and unfolds in them (or does not unfold, but passes them).

So let’s try to learn how to identify these zones on currency charts. And first, we need to formulate the basic requirements for these “magic” zones. Let’s go back to Seiden’s theory.

So, how do I define supply or demand zones on price charts. I find a large candlestick or strong price movement. This movement should break through the last support or resistance level, which means at least the removal of the nearest stops. Next, I look for the last opposite candle on the hourly or 4-hour chart, along the borders of which I build the supply or demand zone. Then I check if the base (consolidation) has been formed before the candlestick that formed the level. After the level is determined, I study the chart before the formation of this zone.

I am looking for an answer to the question why the activity or price imbalance occurred in this particular zone. As a rule, tips are found. It can be a mirrored level of support / resistance in the past or a round level, a past top or low of the price on an older chart (day, week), or something else. After that, I adjust the level if necessary. You should always think and look for an answer to the question why traders began to actively buy or sell in this particular zone.

Let’s look at an example on a 4-hour chart of the EURUSD currency pair.

In area 1 (blue oval), a base is forming from which a strong bearish candlestick emerges. The supply zone (pink) is highlighted exactly along the borders of the last bullish candlestick. On the chart above, the candles forming the level are marked with a blue arrow. As you can see, the first few bounces of the price do not reach this zone.

The next supply zone has formed in area 2 and is also indicated by the borders of the last bullish candlestick. The price continued to decline and a demand zone is being formed in 3 areas. It is highlighted along the border of the doji candlestick. As you can see on the chart, each movement from the supply or demand zones breaks through the last support or resistance levels, which are indicated on the chart by green or red horizontal lines, respectively.

In area 5, buyers were unable to gain a foothold above the supply zone and the price is declining again. In area 6, a new demand zone is formed, from which the price begins to grow actively. Notice how the zones turn into mirror zones and the price tests them with every breakout. After rising from zone 6, the price does not interact with the second supply zone. She ceased to exist.

In area 7, after reaching a new maximum, the price forms a new supply area and another one in area 8. From area 8, the price returns to the demand area from which it bounces twice to supply. And only on the third attempt, traders break through the demand zone and it begins to work as a mirror zone. By carefully reviewing the price charts, you can find similar zones on almost any currency pair chart. Somewhere the price will respect these zones better, somewhere less.

A great advantage of technical analysis of charts using supply-demand zones is that the zones are directed towards the future. You know in advance that when the price approaches one of the zones, you can expect either a breakdown of this zone and, accordingly, the continuation of the price movement. Or a price rebound from this zone. You can use the level indicator To alert to receive a remote signal that the price is approaching the zone.

Supply / demand zones very often appear as mirror zones or swing zones. Take a look at the 4-hour Japanese yen chart at the beginning of the article. The supply area highlighted in blue has become the swing area. The price interacted with it six times using either support or resistance. At the same time, the price almost always tests it after the breakdown of the zone. And these tests become excellent entries to the market with minimal risks. The demand zone (green zone) after the breakout at point 4 also became a mirror supply (resistance) zone.

The approach or entry of the price into the zone is not in itself a trigger for opening trades. It is necessary to find additional factors confirming the price rebound from the level. And it can be very useful to switch to a smaller timeframe at the same time. See how the price bounces back in area 3 on the USDJPY chart (beginning of the article) on the 5 minute chart.

The price tests the upper border of the demand zone twice, after which it rushes upward with powerful impulses, breaking through the nearest resistance level (red horizontal line). A retest of this resistance is an excellent entry point into the market. To confirm the probable price reversal from the zones, you can additionally use any other methods of technical analysis. Engulfing candles, oscillator divergences, trend lines, support and resistance levels, etc. of your choice. Your task is to find a confirmation signal about a likely price reversal in accordance with your trading system.

The use of supply and demand zones for technical analysis in the Forex market, in addition to traditional support / resistance levels, very often helps to find an answer to the question – why the price does not reach the level or does not interact with the levels in any way. Look for nearby supply / demand zones. As in the example above. In area 3 (USDJPY chart), the price reversal occurs precisely in the demand zone, and not at the support level (green horizontal line). The price just doesn’t reach the level.

Supply / demand zones do not exist forever. The more often the price interacts with these zones, the faster they are depleted. It is necessary to constantly adjust these zones in accordance with the current situations on the chart. If the price does not interact with the zone, feel free to remove it, it is useless for technical analysis. Most relevant are the most recent zones, use them for analysis.

And of course, when using supply and demand zones, it is imperative to use principles of price movement in a trend… In an uptrend, the price will be more likely to reverse in demand zones and break through supply levels, using them as mirror levels. Accordingly, in a downtrend, exactly the opposite is true.

Correctly defining supply / demand zones using only charts is an extremely difficult task, but mastering this art will significantly increase the profitability of any forex trading system for you.

Analyze charts, look for supply-demand imbalances on them and get good opportunities for opening low-risk trades.

Also read  9 Tested Steps on How to Trade Forex for Beginners?

Swiss Franc – how you could get rich on the race.

Forex myths that beginners must bust