Over the weekend, bitcoin indicators showed wide fluctuations in the region of $ 49 -52 thousand. The asset tried to break through a difficult psychological line and gain a foothold in a safe position. However, this did not happen, and the BTC / USD quotes sank to a local minimum of $ 46 thousand. This was followed by a surge in market activity and bitcoin indicators rose by $ 6 thousand. This was a good sign for the market, but there are still not enough reasons for positives.

Despite the fall in price to the March low, bitcoin has made a sharp jump over the past day and has risen in price by 8.5%. As of 13:00, the BTC / USD pair confidently maintains its position in the region of $ 53.4 thousand, which instills positive in the future of the asset and the entire market. At the same time, daily trading volumes are falling to $ 61 billion, which indicates a lack of interest in cryptocurrency in the longer term. The total capitalization of bitcoin has come close to a trillion – $ 998.5 billion. 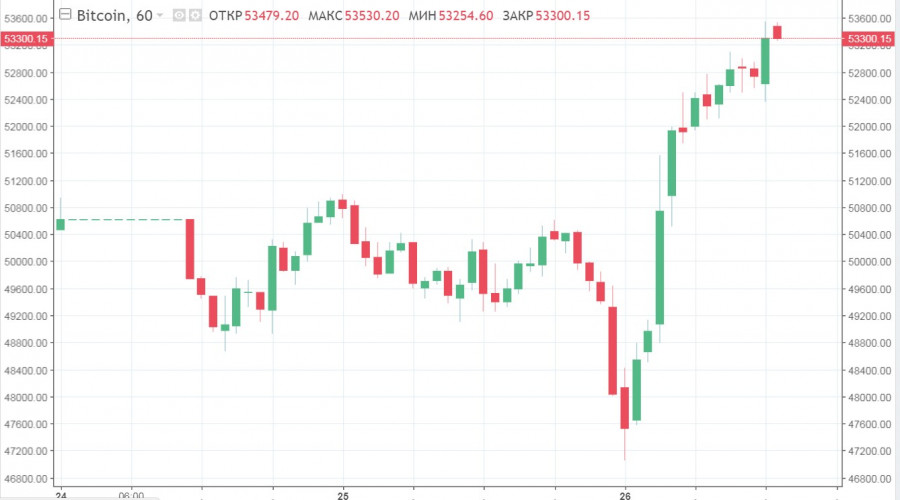 Bitcoin continues to struggle with a correction that was triggered and exacerbated by negative factors. First of all, we are talking about the achievement of a new historical maximum in BTC and the absence of further market support. Large companies fixed their profits and did not dare to bet on the continued growth of bitcoin, despite all the prerequisites for bitcoin to burst into the corridor of $ 70 -72 thousand. In addition, the negative was added by a significant tightening of regulation of cryptocurrencies in certain countries where assets were very popular, as well as problems with hash rates in China, which affected commissions and transaction speed. All this significantly strengthened the correction and resulted in a real collapse of BTC quotes. On April 26, Joe Biden added negativity, announcing an increase in capital gains tax, which could significantly limit investment flow into cryptocurrencies.

However, the first cryptocurrency begins to recover its positions and has overcome the important milestone of $ 50 thousand, which saved bitcoin from falling to $ 40 thousand. Given the growing bearish trend in the market, the tests for the asset are not over. The technical analysis of the bitcoin rate chart suggests that the cryptocurrency needs to overcome several more important milestones before freeing itself from the shackles of price correction. Now the cryptocurrency holds safe positions in the region of $ 53.5 thousand, and if Bitcoin gains a foothold on these indicators, then we can expect a change in the downtrend. The current dynamics of the asset price change indicates a positive outcome, but do not forget about the corrective volatility. Bitcoin has risen in price by 6% in 24 hours, and this is a leap, not a systematic growth to the specified indicators. Given the sharp rise in cryptocurrency, the same sharp drop can be expected.

Also read  Bitcoin with a special "sauce". What is the point and how they make money on it without doing anything? 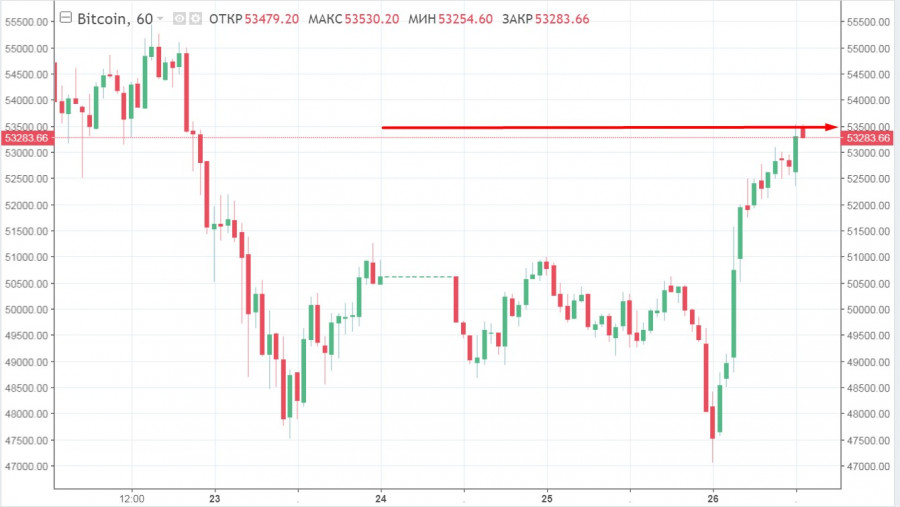 If the crypto asset fails to hold on to the designated positions, then this will aggravate the correction and give a new impetus to continue the bearish trend. Bitcoin indicators will be able to gain a foothold only at the turn of $ 40 -42 thousand, where powerful market support is concentrated. With this scenario, the future of BTC quotes will entirely depend on the news background. However, given the depressed market sentiment and the bearish trend, the cryptocurrency will need a powerful impetus to start exploding. The trends of recent days show that the cryptocurrency market reacts sluggishly to positive, but instantly shudders with negative announcements.

Bitcoin became hostage to many factors that exacerbated the correction and knocked over the indicators to local lows. At the same time, the news background remains negative and levels out individual victories of cryptocurrencies. This week, BTC may break the downtrend and determine the beginning of a new growth cycle for the entire market, but at the same time, the asset may sink to $ 30 thousand and drag cryptocurrencies into a prolonged depression.