After a massive drop in bitcoin quotes earlier this week, the cryptocurrency has entrenched itself on safe lines. Any shift from conditional positions can become decisive in the dynamics of price changes for the first cryptocurrency. Despite a powerful wave of correction, Bitcoin’s positions allow the asset to return to systematic growth.

As of 13:00, the first cryptocurrency continues to fluctuate and is within the safe zone of $ 54-$ 57 thousand. The BTC / USD pair is quoted at $ 54.5 thousand, but over the past day the asset has fallen in price by 1.5% in an attempt to overcome the $ 58 thousand mark. It is worth noting that the attention of market participants to Bitcoin continues to grow, as can be seen on the charts of daily trading volumes, which are approaching the $ 62 billion mark. 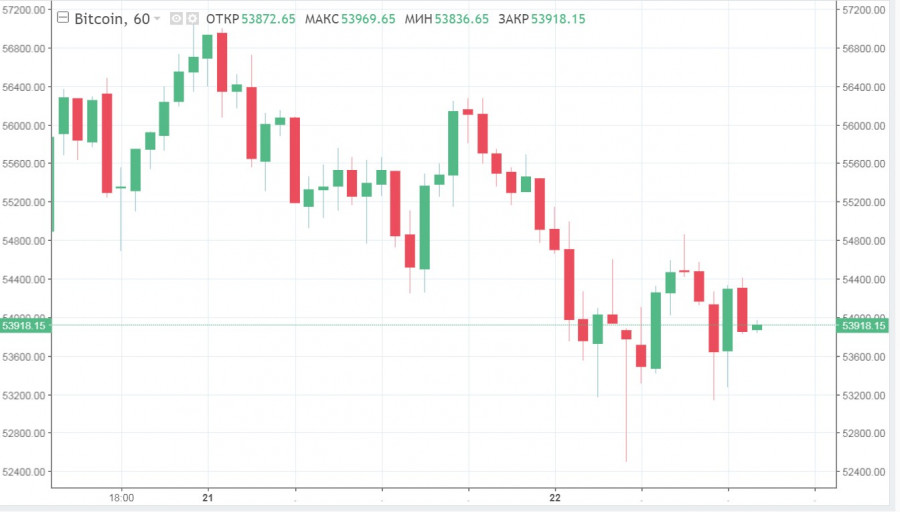 Given the current dynamics of changes in the price of an asset, an ambiguous news background, as well as profit-taking after reaching another historical record, Bitcoin indicators will continue to fluctuate. The main success for the asset in the next few days will be reaching the mark of $ 58 thousand, which will be an early termination of the correction. In this case, BTC will have to wait for the right moment to start the next growth cycle. However, this scenario excludes the entry into the cryptocurrency of a large number of investors who would not dare to enter the market at such high rates. Most likely, the option in which bitcoin gains a foothold above $ 58 thousand can be ruled out, since the asset has already tried to approach this mark twice, but stopped at the turn of $ 56 -57 thousand. This is due to the large number of put options that focus on this metric. 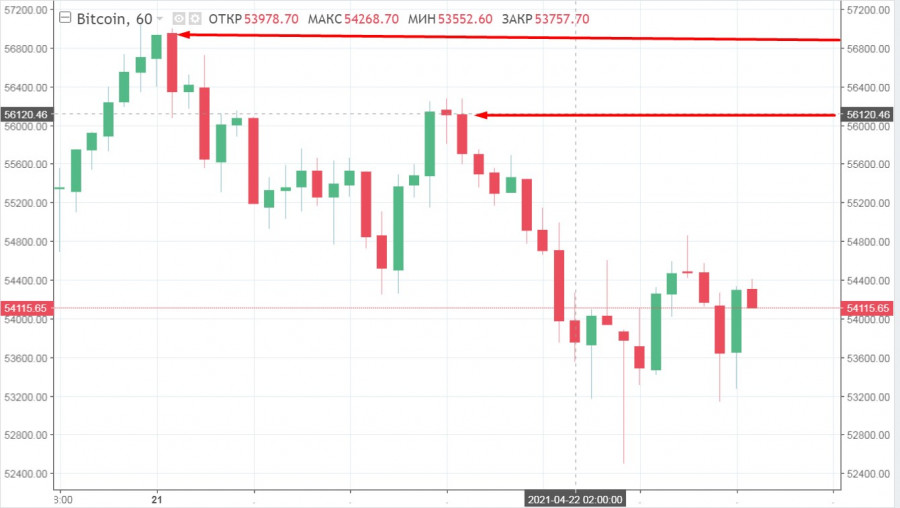 Based on this, it is worth counting on the fact that BTC quotes can drop to $ 50 thousand, which will mean a deeper correction. However, it is not worth talking about the beginning of a downtrend, since the price adjustment is purely technical in nature. Over the weekend, the market was oversaturated with long margin positions above $ 60,000. With the beginning of the working week, when the classic markets opened and liquidity increased, the indicators of the main cryptocurrencies crawled down. Taking into account the sharply negative news background, the price of BTC sank even more, but this is only an additional factor that aggravated the correction, but did not change the upward trend.

When the BTC / USD indicators drop to the $ 50 thousand mark, we should expect a surge in activity in the market, caused by the increased attention to Bitcoin. This is due to the fact that the correction to the level of $ 50 thousand will be the optimal mark for the entry of new participants in BTC and other cryptocurrencies. Also, the first crypto asset should expect a new impulse that can charge the entire market for stable growth. Considering the end of the listing on Coinbase and the wagering of financial assistance from the Fed, Bitcoin, like the entire market, has no special prerequisites for strong growth (especially considering the negative news background). At the same time, there are already prerequisites for the rapid growth of all crypto assets. For example, the Rothschild investment fund announced a major investment in the Kraken crypto exchange, which is preparing to go public and be listed in 2022.

However, we must admit that Bitcoin, like the entire market, is in uncertainty. The scales may tilt in either direction, but in the long term, the first cryptocurrency will not lose its influence and status. First of all, this is due to the formation of the reputation of “digital gold” capable of hedging inflation losses, as well as increased institutionalization, which will become the basis for the growth of BTC in the near future. For some more time, bitcoin will continue to fluctuate in the region of $ 53 -56 thousand, after which a certain direction of change in cryptocurrency indicators will form.