Due to yesterday’s decline in bitcoin, cryptocurrency market indicators sank 12.5%. BTC itself dropped to a local minimum of $ 46 thousand. Despite the massive decline in the quotes of major assets, the main cryptocurrency is starting to recover its positions. It is extremely important for BTC to end the day above a certain range in order not to fall below the $ 50 thousand mark under the onslaught of bears.

Over the past day, bitcoin began to restore stable positions and rose in price by 2.5%. As of 13:00, the asset is quoted at $ 50.5 thousand, which indicates high customer support at this turn. At the same time, the volume of daily trading remains at an average level, around $ 80 billion, and the local dynamics of price changes becomes positive (+ 0.5%). Most likely, the first cryptocurrency will continue to rise in price to the usual level of $ 54 -55 thousand. However, judging by the charts, Bitcoin has a chance to continue sideways movement or even fall beyond the $ 50 thousand mark. Despite the tenacity of the bears, the market is trying to pull the cryptocurrency to the border of the descending channel at the $ 55 thousand mark. For this, it is vitally important for the asset to end the current day on a position above $ 51-$ 52 thousand. 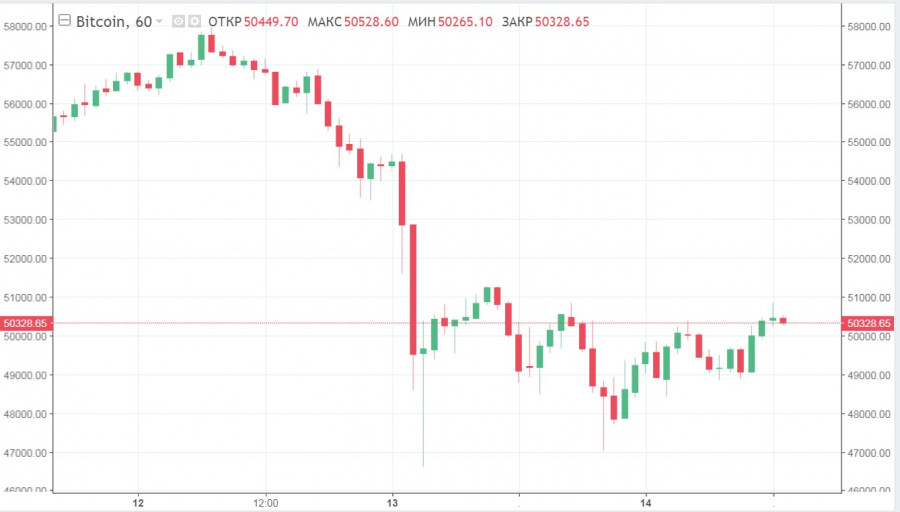 This scenario seems quite realistic, given that the market has shown stability and has already begun to recover. Most likely, the first cryptocurrency will continue to rise in price to the edge of the descending channel. This is primarily due to the renewed interest in the asset on the part of large companies. Due to the collapse provoked by Musk, BTC sank to an acceptable level for investors, which provoked a local surge of interest in the first cryptocurrency. In addition, the fall in bitcoin coincided with a serious drawdown in the US stock markets, which also served as an additional factor for institutions to turn to BTC to hedge their risks. Do not forget about the build-up of bitcoins by whales. In recent days, there has been an upward trend in the discovery of addresses where over a thousand coins are stored. This indicates a strengthening of interest in cryptocurrency on the part of large companies, and also neutralizes the possibility of a sell-off, which retailers were ready to arrange even with the previous decline in asset prices.

Also read  How much money did investors lose after the fall of the cryptocurrency market and what will happen to bitcoin?

The eternal partner of the asset, MicroStrategy, launched a wave of investments in bitcoin. The company acquired $ 15 million worth of cryptocurrencies. Now the software company owns 91.8 thousand bitcoins for a total of $ 4.6 billion. In addition to another injection into the first cryptocurrency, the CEO of the company announced that the average cost of buying BTC is $ 24.4 thousand. Thanks to this, MicroStrategy received more than $ 2.4 billion in profit from cryptocurrency transactions. The conclusion of BlackRock investment director Reed Reeder, who said that bitcoin has a significant margin of safety, brought positive to the market. The entrepreneur is confident that the asset will overcome current problems and become a stable and profitable instrument in the near future.

Despite a certain positive, bitcoin remains a very important problem in the modern world – environmental friendliness. Cryptocurrency mining uses an excessive amount of energy that is harmful to the environment. A similar statement was made by Elon Musk during the announcement of the termination of the sale of Tesla cars for bitcoins. At the same time, SkyBridge CEO Anthony Scaramucci believes that this statement is due to the fact that the carmaker wants to expand its presence in the cryptocurrency market and enter the mining industry. Although such news is manipulative, it negatively affects the quotes of the first cryptocurrency. In the near future, all major assets, including Bitcoin, will continue to recover their positions. Therefore, there is no need to expect a significant shift in cryptocurrency quotes. Most likely, BTC will reach the threshold of the corridor at around $ 55 thousand, after which the process of price consolidation will begin, which may drag on for weeks without a significant news impulse.