The bitcoin rate continues to recover after a major fall to the area of ​​48,000, but now everything is not so simple from a technical point of view. But, before we talk about this, it is imperative to mention that Elon Musk and Tesla Inc. sold about 10% of its bitcoins. This was done not in order to fix a profit, but on the contrary – to demonstrate the liquidity of bitcoin. Musk also said he kept his personal investment in cryptocurrency.

Tesla’s P&L says that the company, which bought more than $ 1.5 billion in bitcoins earlier this year, generated $ 101 million in net revenue from the partial sale. Musk tweeted that in this way he proved the liquidity of bitcoin as an alternative to keeping cash.

Also read  Cryptocurrency market analysis. May 19. He flew away but promised to return

And although many still consider investing in bitcoin a rather risky business – Tesla Chief Financial Officer Zachary Kirkhorn, immediately after the publication of the income statement, said that the company believes in the long-term value of bitcoin as a new investment vehicle.

Let me remind you that at the beginning of this year, Tesla announced the purchase of digital currency in the amount of $ 1.5 billion. At what rate bitcoin was purchased, it was not said, but many experts believe that this price range fluctuates around 40,000 – 43,000 USD. The announcement led to a new wave of Bitcoin growth.

For a number of traders, bitcoin, other cryptocurrencies and tokens are still purely speculative investments, and not a legal alternative to cash. Many argue that the token does not work as a store of value or unit of account due to its volatility. Another thing is the launch of digital currencies, which is expected in the near future from many of the world’s central banks. However, Morgan Stanley believes that once digital currencies are launched, cryptocurrencies will continue to exist as they serve slightly different purposes and are used in very different ways – for example, as a store of value. There are a number of people who do not trust fiat money and banks – cryptocurrencies are quite an appropriate alternative for them. Bitcoin and other tokens can also act as a pretty good speculative instrument. 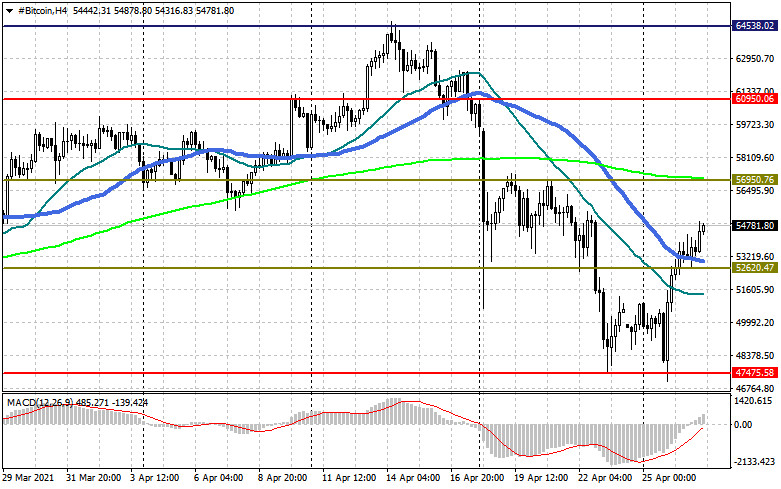 As for the technical picture of Bitcoin, then at present there are fairly clear ideas about its future direction. Until the moment when trading is conducted above the level of 52,600, one can expect more active growth to the resistance of 57,000, and only after breaking this level it will be possible to say that Bitcoin rushed to the area of ​​new historical highs. If the bears push through the level of 52,600 again or problems begin with growth above 57,000, where, by the way, the 50-day moving average passes, then most likely we will observe another large wave of the cryptocurrency fall. This time, with the breakdown of support at 47,500 and reaching the lows of 43,000 and 37,000. It is interesting what the same Elon Musk will say later when his investments of more than $ 1.5 billion begin to show colossal losses.

Also read  Fed Chairman Janet Yellen will deal with the regulation of bitcoin and cryptocurrencies. China looses its grip, and Facebook
Tags: BTC